Home POKER OP-EDS What Would Poker Look Like at the Olympics?
POKER OP-EDS

In Cardplayer Lifestyle’s last poker blog post, we wrote that the only way we’d ever see poker played at the Olympic Games would be if  money were completely taken out of the equation. Generally speaking, professional athletes around the word feel privileged to represent their home countries in international competition, with national pride and winning gold medals taking the place of financial incentive as the main motivational drive to win. It’s reasonable to believe that poker players would also be able to adjust their collective focus for a few days every four years. 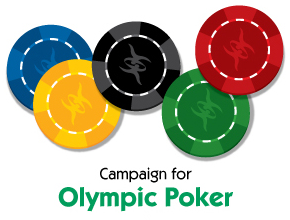 This article lays out our view of what sort of Olympic poker competition would await them.

Which Nations Compete and Who Plays on Each Team?

The Olympics have a unique way of leveling the international playing field. Thus, while Americans would naturally make up the largest portion of the worldwide player pool, just like any other nation they too would field just one team of four players. Furthermore, as poker is a mental game at its core, there would be no need to have separate men’s and women’s events.

Each country’s National Olympic Committee would be responsible for selecting their team’s players on either an invitational basis or via qualifying tournament procedures.

Other various eligibility requirements, both for individuals and for teams, would have to be set out by the sport’s governing body, in poker’s case the International Federation of Poker (IFP). Naturally, to even be allowed to field a team of poker Olympians, each country would have to have at least four potential participants who’d meet the IFP prerequisite standards.

While Texas Hold’em is certainly the most popular form of poker, it’s universally recognized in the poker world that the world’s best players exhibit mastery in multiple forms of the game. In 2006, the Poker Player’s Championship was created at the WSOP for exactly that purpose, using the H.O.R.S.E. format to crown the best player across poker’s five main disciplines: Hold’em, Omaha, Razz, 7-card Stud, and stud Eight or better.

For poker to truly succeed as an Olympic sport, it would have to showcase and reward both individual and team talent. Like gymnastics, medals could be given out for individual victories as well as all-around performance. Ultimate Olympic glory, however, would rest with the national team that performs the best over the entire tournament series.

Thus, there would be a total of six tournaments played: a H.O.R.S.E. event and then one tournament per poker discipline. Instead of “making the money”, each player to make it past the bubble (10% of the field) would be awarded points. The nations whose team members would collect the most points throughout the entire Olympic tournament series would be declared the winners of the quadrennial competition. A total of 24 Olympic poker medals would be awarded as follows:

Could you picture any of these poker players winning a gold medal?

Mainstream Legitimacy and Sponsorship Money for a Truly Global Game

The game of poker has grown by leaps and bounds since Chris Moneymaker‘s WSOP Main Event win in 2003. Sure there have been plenty of ups and downs during that time, but the overall trajectory for poker has been upwards. All that’s missing for the sport to obtain full mainstream legitimacy and be called a bona fide success is sponsorship money.

Every successful sports league, from the NFL to the ATP, has two things in common with one another that have made them stand the test of time: compelling, talented athletes and financial stability brought about via corporate sponsorships.

From the game’s inception until today, the world of tournament poker has essentially had to sustain itself, with prize pools constituted entirely of players’ own monies. On top of that, the players have always had to pay out of pocket to enter each and every tournament as well as cover dealer tips.

Poker’s elevation to the world’s stage at the Olympics, in its purest internationally competitive form, would not only attract a global audience, but it would also be sure to attract global sponsors, which would quite literally revolutionize the game as we know it today.

And that’s good for poker.