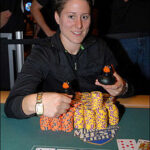 Despite this, and despite Selbst overcoming a tough final table, which included French poker superstar Fabrice Soulier (who finished 3rd), her win wasn’t the biggest story to emerge from the event.

With the Partouche Poker Tour having what’s commonly becoming known as the “other” November 9, only 8 participants took their seats in Cannes, France at the Palm Beach Casino to finish up the poker play. Why only 8 participants? Because a one Ali Tekintamgac was caught cheating and his chips were removed from the tournament.

Apparently, Tekintamgac had been receiving hand signals about his opponents’ holdings from collaborators on the rail. Thankfully, the investigative authorities were on the ball and caught the cheat before he could’ve permanently stained the event’s reputation with a final table appearance.

POKER LIFESTYLE
What Other Shows Can You Watch on PokerGO?
By Brian “Bizzy” Gutierrez