Poker can be a gut-wrenching game sometimes, and a poker cooler is what makes players’ stomachs turn. So what is a cooler in poker?

There are many names for it, a cooler, cold deck, or set up, to name a few. Simply put, a cooler is when two players both have very strong hands, but one is better than the other. Poker coolers can come in many different forms, set over set, straight over straight, or even sometimes it’s just top pair top kicker vs. top pair second kicker. There are many possible outcomes a 52-card deck can produce, and every so often it produces a brutal cooler. Being on the good end of a cooler is amazing, but being on the wrong end… there isn’t much worse than that.

The degree of how bad a cooler is depends on two things: How wet the board is and how strong your hand is. 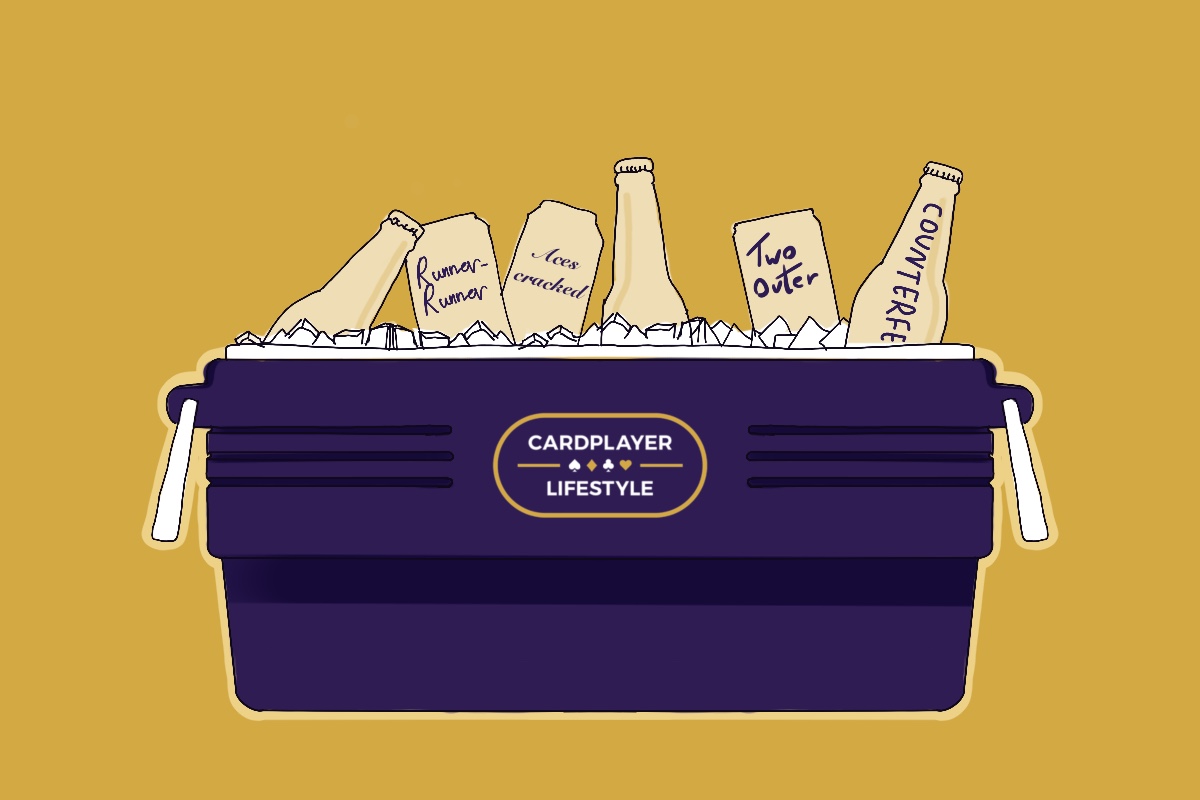 A wet board is one where there are a lot of strong hands possible. For example, AKJJT with three hearts is an incredibly wet board. There are loads of straights, flushes, and full houses available. In contrast, AJ962 with no flush available is a dry board. On this board, the only strong hands are sets and some two pairs. On the wet board, if you have 67 of hearts for a small flush and lose to a full house, it’s not that bad of a cooler as there are so many clear hands that beat you. On the dry board, if you have JJ and your opponent has AA, that is a certified cooler.

The strength of your hand plays a big part in how bad of a cooler it is when you lose. The stronger hand you have, the bigger the cooler. When you lose with the second nuts vs. the nuts, it’s always a cooler. But how strong that hand is can make the level of the cooler vary. It sucks to lose with a strong hand like a straight. When you have 89 and the flop is TJQ but you end up losing to AK, it hurts. It’s a cooler no doubt, but it was a pretty wet board and your hand is strong but not ridiculously strong. However, looking back at our previous example, let’s say all those cards are spades, so both players have a straight flush. This is the worst kind of cooler. Not only does 89 have one of the strongest hands you can make in the game, but on a board like that, your opponent could have a variety of flushes and straights that would be happy to put chips in the pot. So you would have made one of the strongest poker hands possible, one that only occurs 0.0014% of the time, and still lose.

In short, the stronger your hand is relative to the board, the worse the cooler is when you lose. Straight vs. straight on a paired board with a flush available = mini cooler, not that bad. Set over set on a board dryer than the Sahara = big cooler. Straight flush vs. straight flush = ungodly amounts of cooler.

Now let’s take a look at the 10 worst ways to get coolered in poker.

Starting off with an annoying, but unfortunately not too uncommon, cooler. A straight vs. a straight. Making a straight in poker is almost always a good thing. It is a strong hand and usually, you are up against pair and set combinations that can get you paid handsomely. However, when you are up against the better straight it is a killer. This is a pretty bad poker cooler; however, as we previously touched on, when there are paired boards and flushes available this makes it less of a cooler. When there are only one or two hands that beat you, being the higher straights, it sucks to lose with a straight.

Coming in at number 9 is losing with a set vs. a straight. Flopping a set is a wonderful feeling. Being so disguised, you can make PILES of chips when you flop a set against pairs. As good as it feels to flop a set, it feels even worse when you end up losing with one. A set vs. a straight is worse than losing to a flush since flush draws are painfully obvious on the flop. When you flop that set and see a flush draw, you are wearier when it comes in on the turn or river. Straights tend to be a little more disguised than flushes unless the board is an obvious 89T or even a four-liner like TJKA.

Coming in at number 8 is a flush vs. a full house. We’ve all been in this situation at one point or another. You make your flush on the turn against an opponent who seems more than happy to put money into the pot. As you pile some chips in on the turn, you are PRAYING for a clean, non-board-pairing river. Then… you see it. The river pairs the board. You’re sitting there with the nut flush and are still a little uneasy. Your hand is too strong to fold to a reasonable bet, which makes it even worse when you find yourself all-in on this river and see your opponent flips over the full house. While the board pair does make it quite obvious you no longer have the nuts, it is still a major cooler considering your opponent can have several worse flushes or trips they would be happy to bet. We don’t have the poker statistics to support the following observation, but those board pairs always seem to come at the wrong time.

Next up is a flush over flush cooler, and these are the worst. You will flop a flush less than 1% of the time when holding two cards of the same suit. Your odds of making it by the river are better, but it is still not easy to make a flush. Having two players make a flush is even more difficult. The odds of two players flopping a flush is somewhere around 0.18%, so highly unlikely. That is what makes a flush over flush poker cooler so heartbreaking. Bonus points if it is the K-high flush vs. the A-high flush, but in any case, losing flush over flush hurts.

Next up is a truly heartbreaking poker cooler: the dreaded set over set. As we touched on earlier, sets are extremely strong hands due to how disguised they are. When you hit a set on a dry board (no flush or straight available), you should win the pot the overwhelming majority of the time. Unfortunately, it is not always the case, as every poker player has a set over set nightmare in their memory. Flopping a set happens roughly 11% of the time when you have a pair in the hole, and nobody likes wasting their 11% (and all of their chips) by getting set over set. This poker cooler is what keeps me up at night!

A full house losing to another full house is horrendous. This is a lot like the set over set scenario, the only difference being that you are no longer worried about straights and flushes. When you make a full house on a board with straights and flushes available, there are SO many strong hands your opponent can have to pay you off. Trips, straights, flushes, all of these should lose a few bets even on a paired board. When your opponent happens to have a better full house, you are just going to lose all your chips 99% of the time.

Now we are getting into what nightmares are made of, full house vs. quads. At this point in the poker cooler hierarchy, you are going broke 100% of the time. Maybe, just maybe, you can find a flat call with bottom boat against a nitty opponent, but almost all the time you are getting the money in here. Quads are extremely rare to make, so you can never expect to see them when you end up all in with your full house. If your boat gets cracked by quads, I wouldn’t blame you for tilting harder than the tower of Pisa.

The top three spots for the worst poker coolers are reserved for those unicorns, once (or never) in a lifetime, silent car ride, talking to yourself, can’t sleep coolers. I’m talking so unbelievably unlikely that you might throw up if it happened to you. First on this upper echelon is quads over quads. There’s nothing to say here other than it’s ATM time. Some people play years never making quads, so to lose when you do is gut-wrenching. One of these hands was televised in a now-famous hand between Andrew Robl and Toby Lewis at a partypoker World Open. Lewis flopped quads on QQ9 while Robl held 99 for the full house. After a few bets went in, sure enough, the case 9 came on the river, leading to a busted Robl. Whenever I get coolered, I like to watch this hand and remind myself that it could be worse.

Keeping up with our unicorn coolers, quads vs. a straight flush happens so rarely you will likely never experience it, or even see it at a table. For those who have suffered this unbelievable cooler, you’ll never forget it. As previously mentioned, making quads is incredibly difficult, and seeing straights and flushes available gives you hope that you will get paid. When that hope is dashed by your opponent having a straight flush, all you can do is laugh (or cry) at that point. But on the bright side, you’ll always be able to win the bad beat competition!

Not my day: quads vs. straight flush. pic.twitter.com/CecbWOcjyD

Whether it is a straight vs. straight, or quads over quads, getting coolered in poker sucks. It may feel like the world is against you, but that’s just poker. We all have to ride the waves of variance sometimes, and if you find yourself on the wrong end of an epic cooler, at least you’ll have a story. If you play at a casino with a bad beat jackpot, you’ll get a very nice payday if you’re on the wrong end of one of the top 3 coolers. If your preferred room doesn’t have a jackpot and one of those happens to you… well, at least you’ll earn unlimited lifetime bad beat complaints!