The Top 10 Most Frustrating Things in Poker

There are those who contend that golf is the most frustrating sport in the world, and they certainly have a point. The game’s frustrations can be applied equally to both professionals as well as recreational players. So, too, just as poker players can also hold the monikers of weekend warriors as well as seasoned professionals, similarly they would all likely posit that poker is the most frustrating sport in the world. Without getting into a comparative argument between the two, or other sports that may make a substantive case, there’s no denying that there are plenty of frustrating things about poker. 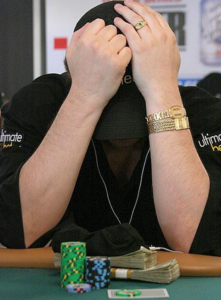 Even the poker’s best players get frustrated! Image credit pokerlistings.com

Unlike other top 10 lists I’ve compiled here on the Cardplayer Lifestyle poker blog, this one was very easy to put together. The hardest part was actually deciding which things were MOST frustrating about poker and which wouldn’t make the list. Perhaps I’ve experienced a few too many of these firsthand, but who better, then, to list some of the most frustrating things a poker player can endure? So, in order from “least” to most frustrating:

When a recreational player goes off to play in a live poker room, often what will determine where he/she plays are the promotions, the crown jewel of which is a bad beat jackpot. After all, this offers low stakes players the opportunity to nurture dreams of a big payout. Inevitably, more often than not, the bad beat jackpot won’t hit, leaving you with either just your profit or your loss for the session.

There’s nothing you can really do to give yourself a better shot at being the winner or loser of the bad beat hand; that’s pure luck. Nonetheless, you can take a couple actions to have a better chance at sharing in a bad beat jackpot prize pool, if it hits:

All that said, missing the bad beat jackpot must be infinitely more frustrating for poker room regulars than for visitors.

9. Leaving at the End of a Poker Vacation

The famous Norman Rockwell painting says it all. What recreational poker player isn’t excited to venture off on a poker vacation? There’s so much potential. You’re all pumped, ready for a big score. Then, after hours and hours of grinding away at the tables, all of a sudden somehow it’s over and it’s time to go back to your regular life. 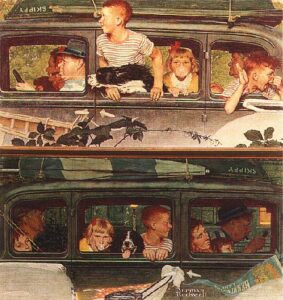 Leaving at the end of a poker vacation is almost equally as frustrating when you’ve profited or when you’ve lost big. If you’ve profited you’re probably mourning the lost opportunity to add more to your bankroll. If you’ve lost, you’re probably sad that you have to lick your wounds and won’t get a chance to get even or make your money back. Either way, it can be exceptionally frustrating, as you usually never know when your next poker vacation will take place.

Not every live poker room offers this promotion, but it’s a lucrative one. Essentially the highest hand achieved in the poker room (usually of the hour) gets rewarded with a tidy little payday (usually a few hundred bucks). While it’s great if you hit the high hand, there’s always the chance that someone else may hit a higher hand before the end of the hour, leaving you with nothing. Trust me, when you can already feel the money in your hands, it sucks to have it taken away in the blink of an eye.

Everyone’s got their local poker room that they play in. Of course, despite the poker world’s best efforts at unifying rules, usually each room has its own unique set of rules and stipulations.  These often cover tricky situations like when a bet becomes official (over the line, forward motion, verbal declaration, etc.). One of the most frustrating things that can happen to a poker player is making an unintentional mistake based on not knowing the local poker room’s rules. This often results in either a missed betting opportunity or an accidental call/fold/raise. Regardless, an accident almost always ends up costing you money, as well as damages your reputation in the eyes of the room regulars who may be at your table. Oh, plus it could put you on tilt. Frustrating, eh?

6. Getting Pestered to Play a Non-Poker Online Gambling Game

Many online poker players also like to play other gambling games, including casino games and bingo games. That’s why they’ll often choose an operator that offers “all of them under one roof”.

That said, it’s frustrating sometimes being cross-marketed to while you’re doing the poker thing. If you’re sitting at the virtual felt, that’s clearly where you want to be. When it’s time for you to do other types of online gambling, you’ll know when to hit the sister sites. In any event, as mentioned, it’s frustrating getting asked over and over again…

5. Sitting at a Tournament Table with a Bully


Ah, the beauty of cash games. Table selection is rule #1, meaning you can always (and should!) request a seat change if the table conditions don’t suit you. But poker tournaments are a different animal altogether. Wherever you’re seated, you’re pretty much stuck until the table breaks. If you’ve got an aggressive/maniac/bully player at your table, your tournament can be a pretty darn miserable experience. This isn’t just frustrating once. It’s frustrating over and over and over again. Often, the frustration can make you do things at a poker table that you wouldn’t ordinarily do, and you’re that much more likely to tilt. 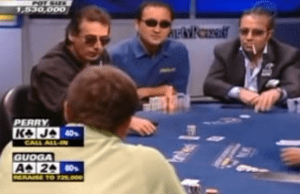 None of these three guys want any part of poker bully Tony G.

Perhaps the only thing more nerve-wracking than a bully at the table is looking across the felt to see that you’re playing against a famous poker pro like Phil Ivey. Just writing those words gives me the chills…

4. Losing All Your Profit

You’ve sat for hour after hour playing cash game poker. Painstakingly, through runs of good cards and bad, you’ve built up a stack, correctly knowing when to hold ’em and when to fold ’em. Then, without warning, things start going wrong. Before you realize you should’ve gotten up already, all that profit is gone – poof! Sometimes it takes a few hands, and other times one big hand makes the difference.

You know how it’s hard to get sympathy for a bad beat story? Arguably even more difficult is trying to feel bad for a player who had been doing well at the tables the whole night until it all came crashing down. Whether it was the player’s fault or not that all that money’s gone, it’s horrible to not have walked away from the table while being comfortably in the black.

Sometimes losing all your profit and breaking even is even more frustrating than ending up in the red for the session, as you inevitably feel like you wasted all that time just to end up precisely how you started off.

Coolered. Sucked out on. Yuck! Don’t you hate when that happens? You get your money in good only for your opponent to get lucky against you. Sometimes you’ve got the slight advantage in a coin flip, sometimes you’ve got your opponent dominated, and still other times you have them crushed. Then, they hit their flush on the river. They pull the inside straight draw out of nowhere. They somehow even manage to hit a runner-runner straight flush draw for the only possible combination of cards that could beat you.

The fewer outs your opponents have when you turn your cards up, the more painful it is when they overcome the long odds to emerge victorious. Of course, the higher the stakes and the bigger the pot when you get “outered”, the more amplified your pain and frustration becomes.

2. Busting on the Tournament Bubble

There are different levels of frustrating that come with busting on a tournament bubble. Generally speaking, it hurts a lot more to bust in a live tournament than in an online tournament because online you can immediately register and enter a new one. 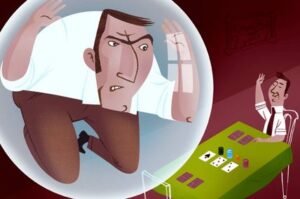 Regardless if you’re playing in a live or online tournament, the frustration of bubbling increases along with the amount you’ve bought in for, as well as the amount of time you’ve already spent playing in the tournament, only to end up eliminated with nothing to show for it after all that time.

Arguably the most frustrating tournament to bubble on is the World Series of Poker Main Event. Costing $10,000 per seat, the field only reaches the bubble a few days into tournament play. Plus, those who make the money often receive close to double the buy-in. To ease some of that frustration, usually the WSOP Main Event “bubble boy” (or girl) receives a free seat in the following year’s event. Thus, the person who finishes just before the bubble probably gets the title of “most frustrated of all” – they get nothing.

Somehow Jean-Robert Bellande has built his entire poker career on a reputation for being broke (yet living the baller lifestyle). Then, there are the high-flying poker millionaires who never stand a chance of losing their bankroll no matter how badly they’ll run for the rest of their lives (we’re still wondering  how Gus Hansen withstands those multimillion dollar online poker downswings). 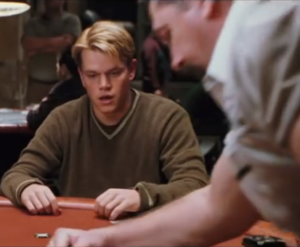 For the rest of us poker playing humans, getting felted is the worst possible thing that can happen. We’re not talking about simply losing all your chips in a tournament (and getting eliminated) or in a cash game (and having to buy back in). We’re talking about that horrific moment when you’ve lost that hand and simply have nothing left in your pockets to reach for.

Even the legends of poker say they’ve been there, having to scratch and claw their way back to a bankroll from nothing at all. As difficult as it is to have to imagine getting a starting bankroll back together and recouping all those compounded losses, there’s nothing as soul crushingly frustrating as knowing you’ve just lost the last poker chip you’ve got to your name.

Is there something more frustrating than these top 10 that you’ve experienced while playing poker live or online? Let us know in the comments section below or on our Facebook page.

I’m not intimidated! I’ll play you, Bret! You actually personify my favorite kind of opponent. Players that sit and find value in other’s “misery” are exactly the place where a lot of +EV comes from. Those players act on emotion instead of fact. Sit with me, kid, and we will go places 😉
Excellent article, Robbie, as always! The Poker Notes app is amazing if I hadn’t told you already!

Thanks Lori – much appreciated 🙂