Tom Schneider is the First WSOP Double Bracelet Winner of 2013

A headline like that really makes you wonder if we’re 6 years late on the news, eh? Back in 2007, Tom Schneider rose to poker fame by winning two bracelets during the World Series of Poker and earning Player of the Year Honors. Just over half a decade later he’s done it again, capturing bracelets in both of this summer’s H.O.R.S.E events, the latest of which came last night in Event #29 – now Schneider’s got a total of 4 bracelets overall. 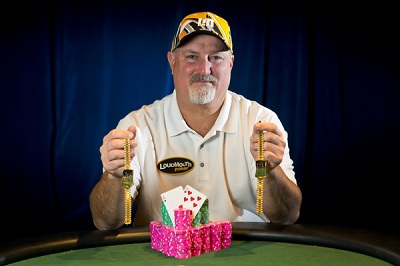 To become the $5K H.O.R.S.E. champion, the 53-year-old Schneider had to navigate his way through an elite field of 260 other players, including a final table that featured such poker luminaries as Chris Klodnicki, David Benyamine, and Greg Mueller. Schneider’s victory, and $318,955 payday, comes directly in the wake of his win just last week(!) in Event #15, the $1,500 H.O.R.S.E event, where he bested a field of 861 other players and banked $258,960.

A sweep of the two H.O.R.S.E. events is an incredibly impressive feat, reminiscent of Jeff Lisandro‘s 3-bracelt sweep of the 7-Card Stud events back in 2009. That means he exhibited tremendous proficiency across 5 different poker disciplines, including Razz, 7-Card Stud, 7-Card Stud High Low, Texas Hold’em and Omaha Hi Low.

This now makes it 14 years running where the WSOP has had a double bracelet winner – an incredible feat in and of itself, especially when one considers how much the fields have grown over the last decade and a half. Schneider’s latest win continues the prevalent trend from this summer’s series in which previous bracelet winners have struck gold yet again. Notably, Mike “The Mouth” Matusow won his 4th bracelet while David Chiu collected his 5th piece of WSOP hardware. Other repeat winners have included Cliff Josephy, Mark Radoja, Athanasios Polychronopoulos, and David Kitai, each of whom have notched their 2nd career bracelet over the last few weeks of tournament poker action.

With half of this summer’s World Series of Poker in the record books, the trend for experienced pros to once again step into the winner’s circle certainly doesn’t bode well for recreational players just hoping to break through for a decent score. It begs the question of whether we’ll see more of the same over the next 30-odd WSOP events, or if new poker faces will rise to the top of the crop.