In just under two weeks, mixed games will take center stage in the poker world as the first ever PGT Mixed Games series will be held under the bright lights of the PokerGO Studio. A host of non-Texas Hold’em games will be the on the menu, with a total of eight tournaments to be staged from February 4-11 at buy-ins ranging from $5,300 all the way up to $25,500. In addition, a couple of $1,425 mixed game satellites (H.O.R.S.E. and 8-game mix) will be held on the two days prior, in which players can win seats into the higher-buy-in tournaments of their choice.

While obviously not as popular as the ubiquitous Texas Hold’em is in poker rooms around the world, mixed games are often considered to be the “true test” of a poker player’s all-around capabilities. Notably, the $50,000 Poker Players Championship contested at the World Series of Poker is a mixed game affair, awarding not just a bracelet but also the coveted Chip Reese Trophy. Typically, if mixed games are being spread in a poker room, it’s for high stakes, with mixes of $200/$400 all the way up to $4,000/$8,00 (and sometimes even higher) not uncommon on the Las Vegas Strip.

A mixed game tournament or two is often added to tournament series schedules at various events around the world, and of course the WSOP holds numerous mixed game bracelet events each year, but the PGT Mixed Games series represents the first time there’s a dedicated high buy-in series of poker tournaments devoted exclusively to mixed games.

Here at Cardplayer Lifestyle, we’ve always been big fans of and strong advocates for mixed games, and it’s wonderful to see the PGT spotlighting them. Ahead of the PGT Mixed Games series we spoke to its planner, PokerGO’s Senior Content & Live Reporting Manager Tim Duckworth, as well as three Poker Hall of Famers, Daniel Negreanu, Eli Elezra, and PokerGO President Mori Eskandani.

Let’s Give It a Shot

When I asked Duckworth what gave PGT the impetus to try and stage a series of mixed game tournaments for the first time, he replied that “the idea of running it began during the 2022 WSOP. Players expressed a desire for a dedicated series, and from there I began working on the idea. It started with a simple survey to mixed game players asking for their input on dates, different schedules, the ideal championship game, and how we should track hands and game changes.”

The players responded enthusiastically, with over 70 responses being submitted. From there, Duckworth drafted a tentative schedule which, after a few tweaks and iterations over the subsequent months, ended up constituting the official PGT Mixed Games series.

“The popularity and interest in mixed games have likely never been greater” said Eskandani, who himself is known to enjoy high stakes mixed cash games. “The mixed game tournaments that have been part of the PGT have produced great numbers and we received so much positive feedback that it became a no-brainer to offer a dedicated mixed-game series in the tour’s third season” he added. 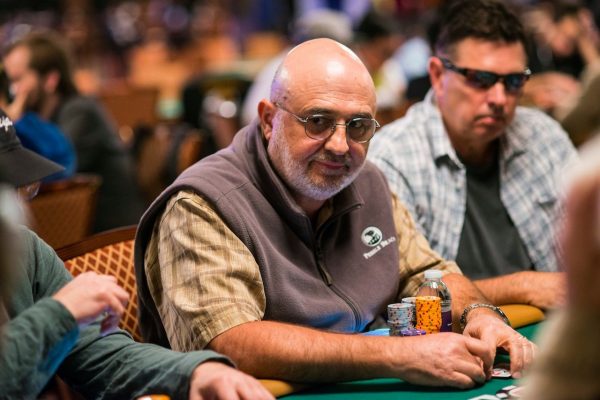 If You Build It, Will They Come?

Quite literally without precedent in the poker world, PGT’s Mixed Games series is by definition experimental, and the company is hoping for a good turnout.

“I’m hopeful that the players who are regulars in the big buy-in mixed events are the WSOP will be in attendance for PGT Mixed Games. This series is designed to cater to high rollers who play mixed games and condensing all the events into one schedule makes it easier for players to come out and play,” said Duckworth.

His theory makes sense. Many players who’d otherwise be interested in mixed games might otherwise be hesitant to travel out for “just” one or two mixed game tournaments. A whole slate of them, on the other hand, could have a compounding effect to boost attendee numbers.

Asked to name names of which players he thinks will show up, Duckworth said that “the Vegas-based guys such as Daniel Negreanu, David “ODB” Baker, Eli Elezra, Jeremy Ausmus, John Monnette, Nick Schulman, and even our own PokerGO President, Mori Eskandani, are all expected to play. I really hope that we’ll be able to lure players based outside of Las Vegas to come as well, including Shaun Deeb, Yuval Bronshtein, Adam Friedman, Mike Wattel, Bryce Yockey, and 2022 WSOP Player of the Year Dan Zack.”

While he’s excited to take a seat at the felt himself, Eskandani treaded a bit more cautiously when it came to predicting the final turnout. “It’s always hard to know exactly who is going to show up to a tournament series. That said, there’s been enough positive reception regarding the first-ever PGT Mixed Games that we’re expecting a full house at the PokerGO Studio. Our team has been hard at work for several months of planning and player outreach in an effort to put together the best mixed-game series possible, and we anticipate we’ll see an excellent mix of big names, high-stakes tournament and cash players alike, shot takers, and plenty of PGT regulars.” 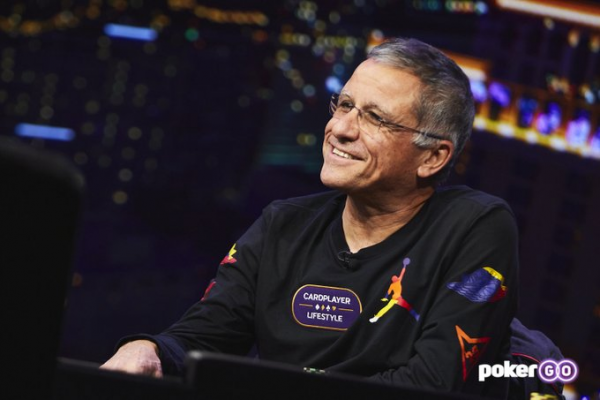 Elezra is confident that “we’ll be able to get at least 40 for most of the events. I personally know at least 20 people who will come – not just from Vegas, also from Arizona, New York and San Diego.” Negreanu is slightly more bullish on projected attendance, saying that “I do think it will be a success. I’m hearing lots of buzz from within the mixed game community and even some side betting pools. I think if the events average 50 entrants across the board that would be a really solid showing.”

A Closer Look at the Schedule

As mentioned, a great deal of thought went into constructing the schedule. As per Eskandani, “the PGT focuses on high-stakes poker tournaments, and that’s what players will be getting for the first-ever PGT Mixed Games series with buy-ins from $5,300 to $25,500. Leveraging extensive player outreach, our team has crafted a very appealing schedule to include a variety of events. H.O.R.S.E., 8-Game, Triple Stud, Triple Draw Mix, Big Bet Mix, Dealer’s Choice, 10-Game, and No-Limit 2-7 Single Draw are all being offered, plus the great team at ARIA Resort & Casino are putting on two $1,425 satellites right before the series to give more players a shot at competing.” 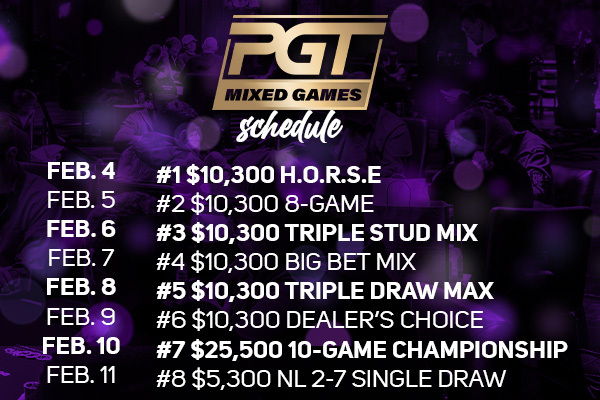 With such a diverse menu of games, naturally each player will have their eye on a personal favorite, but feedback from the three Poker Hall of Famers we spoke to indicates that the crown jewel lies at the end of the schedule. “I really like the $25k 10-game event specifically because it has badugi in it” Elezra said. “Among the $10k events, I’m eager to play in the triple stud mix. I’m playing in every single one of these and I’m gunning to be the player of the series,” the 5-time WSOP bracelet winner added.

“Personally, I cannot wait to see the $25,500 10-Game Championship. That’s quite the premier event that should be a must-play for any serious high-stakes mixed-game player,” said Eskandani. Negreanu echoed those sentiments as well noting “I’d have to say the event that excites me most is the final event, the $25k 10-Game Championship, as it’s very likely to decide the overall series winner and I like all the games.”

We’re adding $25,000 for the player who earns the most PGT points over the course of the series.

The fact that the PGT Mixed Games series is even taking place is already a positive development for the poker world and an indicator of progress and overall growth.

“This is so good for the poker community,” said Elezra. Way back in the day, Barry Greenstein used to say ‘if you want to be a complete player, you should start playing mixed games with us.’ I think even among the big high rollers, everyone realizes this, too. Cary Katz and Steve Zolotow play in the mix events; you’d never think they would, but I like to see it. I’m excited to show the poker world that poker isn’t just about No Limit Hold’em,” he added.

For his part, Duckworth is excited that more players will get the opportunity to play in the PokerGO Studio for the first time, noting that “There is a vast majority of mixed game players who have never experienced the PokerGO Studio, and that is about to change. The privacy that the PokerGO Studio offers, combined with the excellent service from the ARIA Poker Room team will be a treat for these players.”

Eskandani concurred, stating that “On the PGT, we strive to celebrate the best-performing tournament players in the world, which we have successfully done through offerings such as the Poker Masters, U.S. Poker Open, PokerGO Cup, and more. It’s only right that we also provide a platform for high-stakes mixed-game players to showcase their talents.”

Of course one metric of success will be the number of people who show up to play. Beyond that, there are other metrics, too.

Negreanu, a frequent player — and winner — in the PokerGO Studio was quick to point out how the PGT Mixes Games would be different that other series he’s played there. “It’s a totally different environment with a very different crew of people entering these events. Outside of me personally, there isn’t a ton of crossover between the two worlds. For limit events, the atmosphere is typically casual with lots of friendly, and not so friendly banter.” 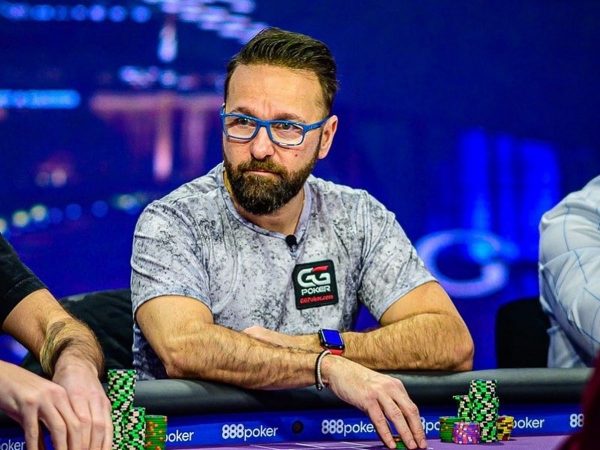 With $25,000 and a trophy added for the player who accumulates the most PGT points during the series, one thing is certain: mixed game poker is ready to shine bright!