One of poker’s most celebrated tournament series is marking a major milestone this week, as the European Poker Tour moves online for the very first time. Owing to the continued care needing to be taken with regards to organizing live events, officials at PokerStars felt that the time was right to offer the first ever online version of their marquee poker event series. 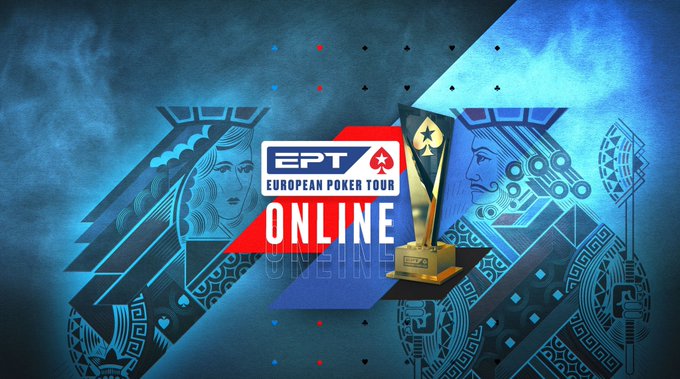 The 40-event series began this past Sunday, November 8, and will continue running until the “Last Chance” event next week Tuesday, November 17. Half of the events will be high buy-in affairs, to be complemented by “mini buy-in” counterparts, such that players with bankrolls of all sizes can take part in the festivities.

While there’s plenty of great poker action to look forward to, this newest evolution of the EPT also gives us the opportunity to look back at the fabled series and what’s made it so great over the years.

The European Poker Tour is one of the longest-tenured tournament series in the world, having begun in Barcelona in 2004, the year after Chris Moneymaker won the World Series of Poker Main Event.

Over its 16 years of existence, there have been 126 EPT Festivals held. Save for two instances, there’s been a different Main Event winner each time, the lone exceptions being Mikalai Pobal and Vicky Coren. A true sign of its prestige, the EPT has awarded an astounding 163 prizes  worth at least $1 million, creating scores upon scores of millionaires over the past decade and a half plus.

To gain a deeper appreciation for everything the EPT has stood for since its inception, we asked a number of longtime PokerStars stalwarts to share their best memories of the series during their tenure with the company.

I love the live events because we create something which makes players, dealers, media and us happy. I guess looking at all this there is one thing that connects it all – it is the people. The greatest memory of the EPT, while we can’t have the EPT Live, is the people, the community and the fun. The EPT family. 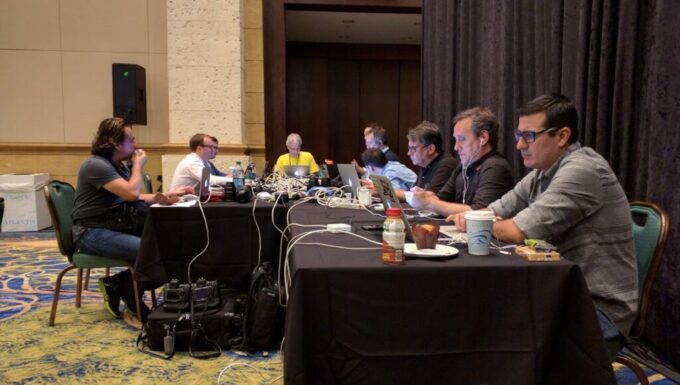 Members of the PokerStars blogging team working at a live event

Chris Moneymaker: Bungee jumping in Sochi, losing a bet and having to swim in some European sea in the coldest water that ever existed on earth, having my wife and father with me in Monaco, and racing Liv Boeree down a slide to explain gravity (I don’t know why I was picked).

Andre Akkari: My favourite moment was in the EPT Barcelona when I saw QQ, 5 left, all in, against AQ. My worst moment was the river!

Kalidou Sow: My best moment, I’m three left on the EPT Prague, I have top straight against bottom straight, and my opponent goes all in…

Fintan Hand: Being on the rail for my mate’s third place finish in London 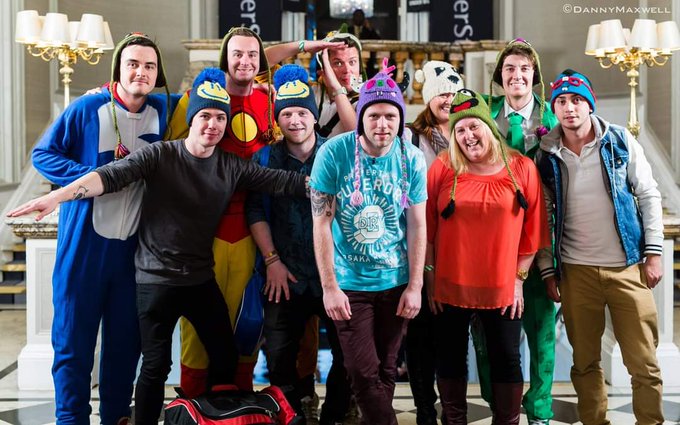 Felix Schneiders: My favourite moment will be the ‘Every time the seven is coming’ with Dönig and Watnlos. Literally everyone on Twitch thinks of it when they see a 7 hitting hard on the felt.

Naturally, there are oodles and oodles of memories associated with the European Poker Tour, and the live event series is sure to return in a big way in the future once “the coast is clear” pandemic-wise. In the meanwhile, new memories and moments are set to be made in this first-ever online version of the EPT.

As mentioned a score of high buy-in events will be mirrored by a score of low-buy-in events, featuring contests in NL Hold’em, PLO, 6+ Hold’em, and 8-Game. Tens of millions of dollars in guaranteed prize pools will be sure to attract legions of players, eager to win the famous “spadies” (physical trophies will be sent to all the event winners) and become part of poker lore.

For the fans, just as with the Stadium Series and WCOOP that took place earlier this year, the EPT Online will also feature cards-up coverage, brought to you by the legendary commentary team of James Hartigan and Joe Stapleton.

You guys!! The first EVER European Poker Tour ONLINE festival is underway, and me and @J_Hartigan and a bunch of legit superstars (@GriffinBenger, @SquidPoker, @MariaHo) will be covering it LIVE – same as it ever was.

For those of you looking to tune in to the coverage, you can see the full broadcast schedule below. 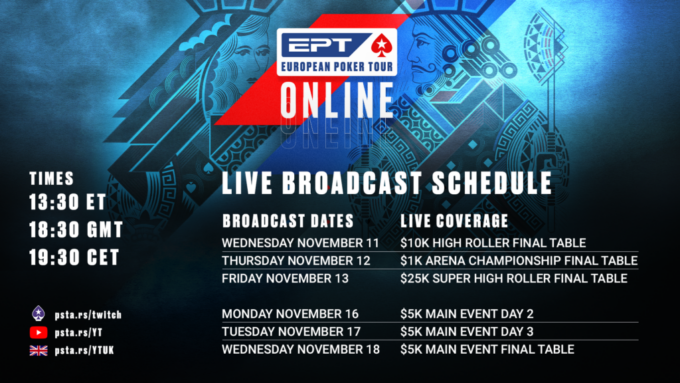