Josh Arieh, 2021 WSOP Player of the Year, discusses his early days in poker and the pool halls.

In this episode of The Bernard Lee Poker Show on the Cardplayer Lifestyle Podcast Family, Bernard Lee interviews Josh Arieh, 2021 WSOP Player of the Year.

At the start of this week’s interview, Josh discusses winning the 2021 WSOP Player of the Year. The Atlanta native talks about how his early success in poker, his 3rd place finish at the 2004 WSOP Main Event, and two previous bracelets in 1999 and 2005. Josh reflects on how he got started in poker in a pool hall and the games he played starting out in the 1990’s, especially Omaha. Then, he talks about his first WSOP bracelet win in 1999.

During the second part of this week’s interview, Josh remembers the Moneymaker Boom and Josh’s involvement at the time. He also discusses the effect of Black Friday on his life and the world of poker in Atlanta. Josh explains his work with PocketFives and their staking platform. Finally, Bernard describes and Josh explains the incredible hand versus Bryce Yockey in the 2019 WSOP $50,000 Poker Player’s Championship. 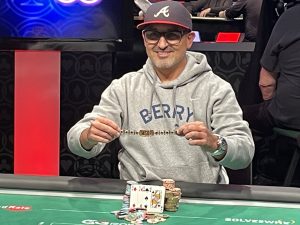