When the dealer has yet to peel off the river card and your tournament life is on the line, you don’t walk away from the table yet. But you sure as hell stand up, realizing the gravity of the moment… and pray for your ONE TIME! 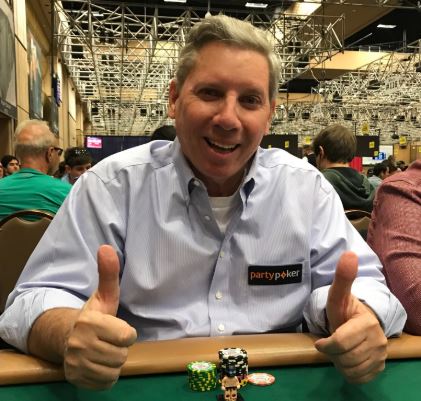 I made my first trip out to the WSOP together with my Dad in 2016. It wasn’t meant to be a working trip for me, but rather just a very special, once-in-a-lifetime, father-son poker vacation.

Mike Sexton’s great autobiography, Life’s a Gamble, had just come out though and D&B Poker publisher Dan Addelman, along with Mike’s first wife, Pam, were coordinating media interviews, so I jumped at the opportunity.

Mike didn’t know me from a hole in the wall, so you can only imagine how incredulous I was to read his first email response to me.

You invited a complete stranger TO YOUR HOUSE to interview you?! Who does that?!

Logistics ended up working out better for us to meet in the WSOP Media Room. Looking back, I’m embarrassed at how ill-prepared I was. I had a few questions scribbled down in a notebook. I used my cellphone, connected to a tiny tripod, to broadcast the interview on Facebook Live. Sadly, only a tiny 10-second snippet of that footage remains, but at least I’ve still got the interview transcript.

What a contrast it was, indeed. A doe-eyed rookie stumbling and bumbling nervously through one of his first ever in-person interviews while his father watched from the sidelines. On the other side of the proverbial mic sat one of poker’s greatest ambassadors, impeccably well suited up, totally at ease, all smiles, happy to answer as many questions as the rookie threw at him, and of course hitting each answer out of the park.

The few minutes you sat with me and my Dad, and the pictures you so graciously took with us, ended up being one of the absolute highlights of our trip to Las Vegas. And to top it all off, you even gifted me a signed copy of your book. What an absolute class act!

To this day, I still remember the feeling of us parting ways, followed by my Dad and I turning to each other, simultaneously saying “Oh my G-d; did that just happen?!”

On that trip, I interviewed @Mike_partypoker – was nervous enough conducting an in-person interview (I barely had any experience), let alone having my Dad watch me… but I remember how proud he looked and how excited he was to take a picture with Mike. #MyFirstWSOP pic.twitter.com/W8rpz539oS

A Deep Impact and a Brilliant Legacy

In retrospect, I only wish I had made more of an effort and indeed taken you up on that offer to come to your house, Mike. I wish I had had the pleasure of getting to know you personally just a little bit better over the last few years that I’ve been active in the poker media scene. I wish I had more stories to tell.

Linda Johnson’s tweets shook the poker world to its core. Your inner circle has obviously known of your condition for a while, but the overwhelming majority of us only just found out, and we are reeling.

Mike Sexton is poker’s greatest ambassadors. He authorized this tweet. He has only wanted to deliver positive messages so he kept his health problems private. Mike has been battling prostate cancer that has recently spread to other organs. He began in-home hospice a month ago.

Jan Fisher and I read your tweets to Mike Sexton today and he asked me to thank you all so much for your love and support. He is too tired to personally answer emails, texts, and tweets but he wants you to know he is touched by them. Mike has requested privacy at this rough time.

In hindsight, the World Poker Tour recently honoring you by permanently affixing your name to its Champions Cup ­– now the Mike Sexton WPT Champions Cup – becomes a moment that much more special.

Only now realizing that you’ve been fighting a dreadful disease this past while, it’s heartwarming all over again to know that we’ve had another opportunity to express our love and admiration for all you’ve done.

And of course, true to form, you acknowledged the moment like the champion you are:

I wrote a blog on why I feel so honored the @WPT re-named the WPT Champions Cup after me. Basically, my entire (business) career happened because I had a dream over 25 years ago. You can read about it here. #partypoker #wpt #MikeSextonWPTChampionscup https://t.co/HOVLT0LCdu

We Love You, Mike

Watching the tributes pour in from all corners of the globe over the last few hours has been surreal. Story after story after story keeps emerging of how you’ve brightened so many of our lives. Whether via the TV screen or at the felt, the joy you’ve brought to the poker world is your lasting legacy.

Mike, you are the kind of poker player who knows how to smile regardless of what card comes on the river. It’s that special quality – that ever-present smile – that has endeared you to every single person you’ve met and that has resonated so strongly over your lengthy career in our game.

The entire poker world is standing with you on your rail right now, Mike, praying for ONE MORE TIME! Please know, Mike, from all of us, that whatever card the dealer peels off, you’ve played an indescribably beautiful game that has inspired us all.