Those were the actual words that fell out of my mouth as I entered the Seminole Hard Rock Hollywood poker room and saw its warm massive surroundings for the first time. From the second I walked in, I was impressed, and as with many aspects of life, first impressions are important. Poker rooms included!

But would the steak live up to the initial sizzle of the spacious 45-table room, especially on what promised to be one of its busiest days of the year?

While I’m here for the WPT Rock N Roll Poker Open, it’s also Black Friday, the busiest shopping and promotional day of the year. The Seminole Hard Rock poker room was well aware of this and loaded a high-hand promotion onto Black Friday and the following Saturday where they gave away $1,000 every 20 minutes from noon ‘til midnight! That’s $36,000 a day, twice!

An action-packed day was in store for not just the players, but the staff as well, as by early afternoon, every one of the 45 tables was full of players engaging in cash games ranging in stakes from $1/2 to $50/100 NL with Pot Limit Omaha games ranging from $2/2 up to $25/50, with an $8/16 Omaha 8-or-Better game sprinkled in as well.

A day THAT busy provides many challenges for the staff, but credit to everyone from floor staff, to dealers, to servers; everyone was fantastic, leading to my confirmation that indeed the steak lived up to that initial sizzle.

The Poker Room Itself

So, getting back to that initial reaction of mine. That came from not just the size of the room, but from the warm décor and classy vibe, which can be tough to capture in a large room.

The primarily dark brown wooden walls house a room with well-spaced tables – again not necessarily something you find in a large 45-table room where real estate is critical, especially on days as busy as this weekend.

Going with the theme of the Hard Rock Hotel and Casino, the walls are adorned with cool artwork featuring musicians as characters on playing cards, like John Lennon in the picture below as the ace of diamonds. 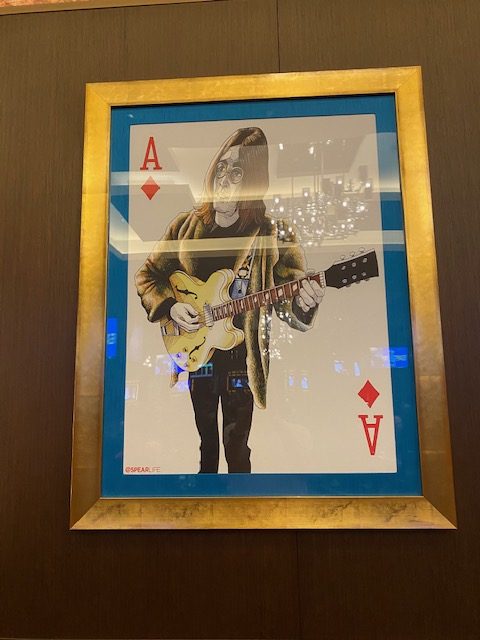 A dress from ‘Poker Face’ singer Lady Gaga also hangs in the entrance to the room. 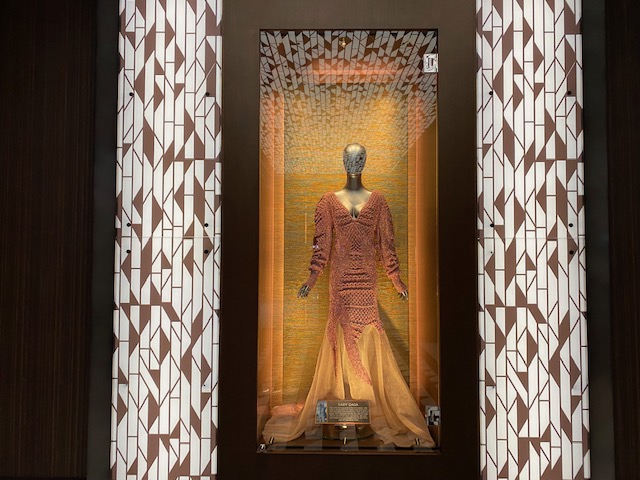 Player comfort has been prioritized, not just by the spacing of the tables, but by sticking with 8-handed play (again, they could easily insist on 9-handed, but have chosen to keep to a more spacious and comfortable seating of 8-handed), along with comfortable, high-backed swiveling chairs.

Equipment quality is great as well, with automatic shufflers at every table, clean, new felts with a nice level of compression, USB ports at every seat, and – my personal favorite – Faded Spade playing cards, with their unique card faces and satisfying snap as you peel and release. 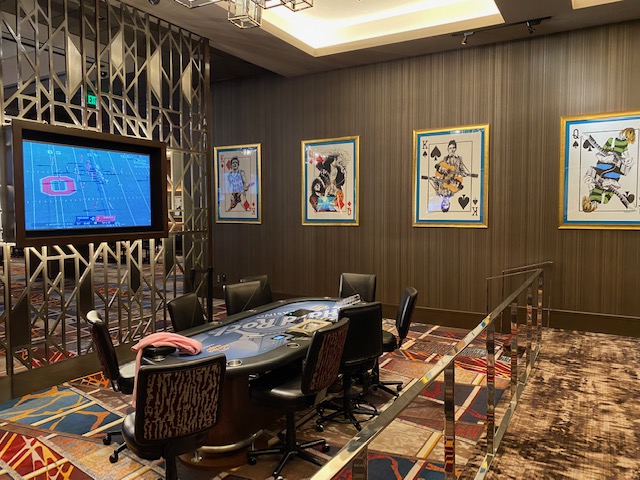 I’d like to be able to regale you with tales of wild pots, huge wins (or at least a huge but entertaining loss), but unfortunately, over approximately nine hours of play at $1/2 and $2/5 No-Limit Texas Hold’em across three sessions, I was never up or down more than a couple hundred bucks, with the final tally of the day being -$15, with no high hand bonus anywhere near me. So, we won’t talk about that.

I will say that the players were a good mix of tight-aggressive, loose-passive, and weak-tight players, mostly standard for low-stakes games. Above all, however, players were friendly and I didn’t have a single unpleasant opponent at any of my tables. 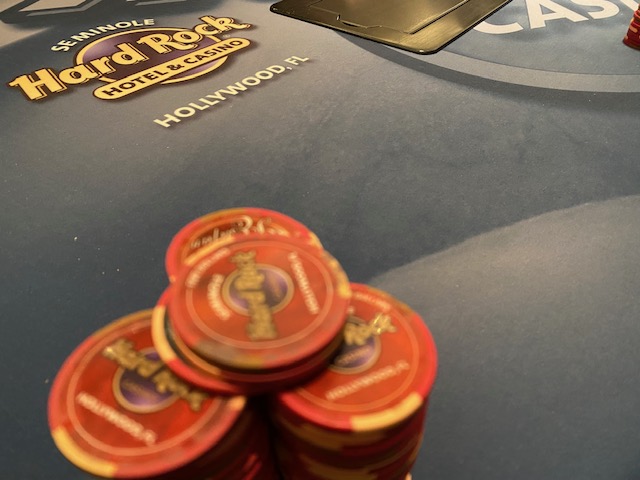 Of note, the final of my three sessions in the day was a late night 3:30 a.m. run to the room after waking up and not being able to sleep. Friday late night / early morning in a poker room should be ripe with a tired and non-sober variety of players, but they appeared few and far between in my venture there. There were only a couple of well-lubricated players at my table who busted shortly after my arrival only to be replaced by dealers from neighboring casinos who were capable players.

So yeah, no easy late-night money for me. Regardless, each session was enjoyable with good crews of players at all times of the day.

As mentioned earlier, a promotional weekend like this with a jam-packed room throughout the day is certainly a challenge for every member of a room’s staff, but the Seminole Hard Rock crew crushed it.

When I first arrived at approximately 11:30 am, the $1/2 No-Limit list was nearly 50 players deep with half the room already full. The room was well prepared for what was to come, as (expecting that I may have a bit of a wait ahead of me) I took off briefly only to return 20 minutes later having missed my call… and saw that 10(!) more tables had been filled in that time. The registration desk recognized me and put me back at the top of the list, and not five minutes later, another batch of tables were opened and I was seated. 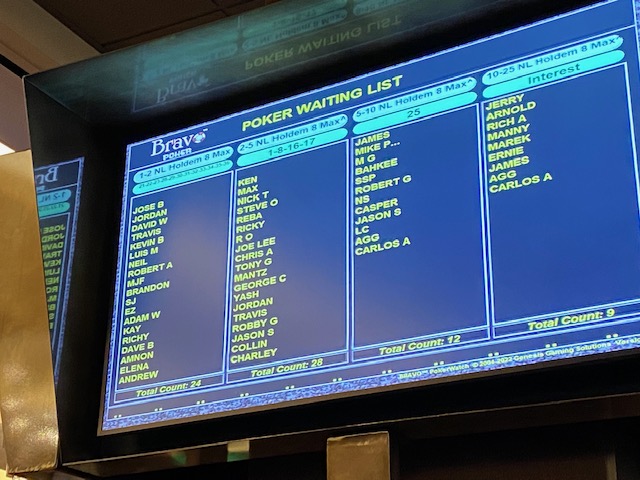 After taking a two-hour break to watch the USA-England World Cup game, I returned for session number two, and while the room was full, the list was short, and it wasn’t 15 minutes until enough players had left and I was seated again.

For my late-night session, 22 tables were still in play at 4 am, and I was able to hop into a game immediately.

While initial buy-ins were encouraged to be purchased from the cage because of the volume of players in the room, chip runners were readily available both for initial buy-ins and rebuys when necessary.

Again, on a day as busy as this the depth of dealers can be challenged, but my experience saw a quality dealer hop into the box every half an hour. Games were well controlled, hands were dealt quickly, and house rules were enforced efficiently and politely. The only real challenge came from a pair of players who repeatedly violated the English-only at the table rule, and after multiple violations they had to be warned more sternly, at which point, they adhered to the rule.

Servers were doing laps of the room regularly, with wait times for cocktails much shorter than I would have expected on a day with a packed house.

From top to bottom, every member of the poker room staff is to be commended for an outstanding effort to make the playing experience as enjoyable as possible for the players. 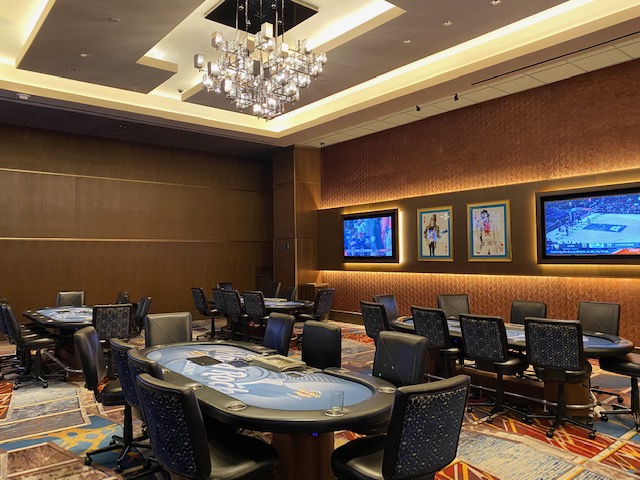 Despite an uneventful day financially at the tables, my experience at the Seminole Hard Rock Hollywood poker room left an indelible impression, quickly becoming one of my absolute favorite rooms I’ve ever played in.

I’d heartily recommend it as a must-visit for any poker players traveling through South Florida, and one I’ll certainly be visiting again.

Like, immediately. I mean I’m here for another few days!