What do Doyle Brunson, Phil Hellmuth, Phil Ivey, Johnny Chan, Erik Seidel, and President Barack Obama all have in common? They will all be playing in a special poker tournament on Air Force One today. Obama, an admitted poker fan, invited the top 5 all-time WSOP bracelet winners to join him for some 6-handed action on a flight from Las Vegas to Atlantic City this afternoon. 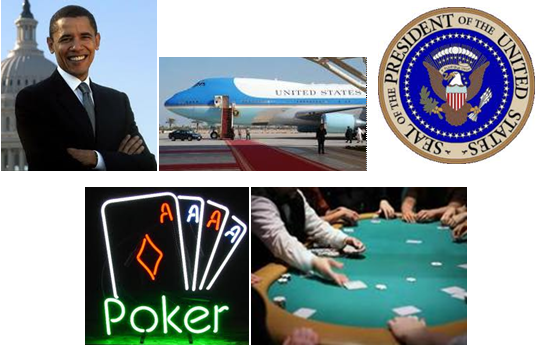 In a White House press release, the President was quoted as saying that “this special flight is meant to draw attention to the issue of regulating online poker in the United States. The fact is that this country is facing a serious deficit and that taxing and regulating online poker could help to alleviate our federal budget shortfalls… I look forward to playing some cards with poker’s greats… it should be a lot of fun.”

Playing poker with the President of the United States is also sure to be a career highlight for all the poker pros. After receiving his invitation in the mail, Doyle Brunson released a statement that “Never in my wildest dreams did I ever think poker would go this mainstream. To have the opportunity to ante up with a sitting President of the United States is unquestionably the pinnacle of my 50-some-odd years playing poker.”

The stakes for the tournament were not disclosed, but Cardplayer Lifestyle was able to obtain some extra information from a White House source, who spoke on condition of anonymity. Apparently, the tournament will be a winner-take-all affair, with each participant putting up a WSOP bracelet for the prize pool. President Obama, in lieu of a bracelet, will be putting up a special edition deck of cards with each card featuring the Presidential Seal and Obama’s autograph on the back.

Oh, and by the way – Happy April Fools Day from your friends here at the Cardplayer Lifestyle poker blog :-).

The president is going to be a fish!