A couple weeks ago, a PokerStars representative was kind enough to reach out and offer Cardplayer Lifestyle an exclusive infographic for publication related to the company’s game integrity efforts. Upon viewing the infographic, it hit me how it was the first time the company had been so open in publicly revealing numbers illustrating their efforts on the game integrity front. The infographic itself practically begged for numerous questions to be asked, especially as the issues of bots and collusion have been so hotly discussed in recent weeks and months among members of the poker community, both professional and recreational players as well as within the industry.

While I pay plenty of attention to industry developments and had a number of questions of my own, I felt Cardplayer Lifestyle’s audience, and the community as a whole, would best be served by my consulting with someone who actually plays on the site (which I cannot do from here in Israel). As such, I want to thank one of our contributing writers, Mike Patrick, for taking the time to put together a fantastic slate of questions.

Furthermore, I want to thank and commend the PokerStars Gaming Integrity Department for their willingness to open up and share their answers with us and the greater community of poker players.

Below is the infographic, followed by some exceptional and eye-opening responses to our queries. 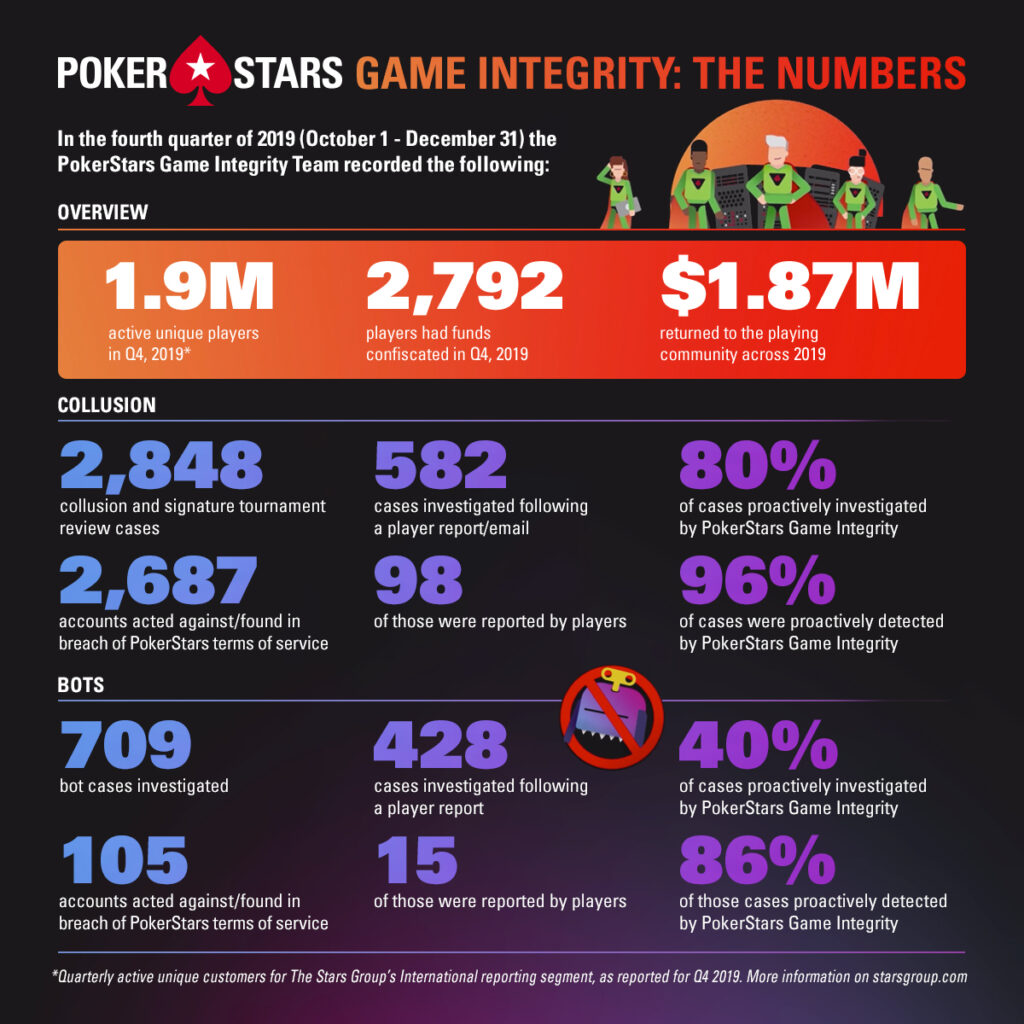 Why did PokerStars decide to begin releasing this information now? Did the company’s decision have anything to do with competitor sites previously making their figures available? Moreover, you mentioned in your communication with us that these numbers will be released quarterly from now on. Perhaps doing so monthly could give interested parties / players more regular numbers to compare and track progress?

Our intention here is to reassure players that they have the full force of more than 50 of the industry’s finest programmers, analysts and ex-pro players looking after their best interests at the tables. Obviously, there are some details about our processes that we can’t share, but the more we arm players with the information they need to make the right decisions on where to play, the better. That goes for us, as well as our competitors.

The information we’re sharing has been in the works for some time. Our Game Integrity team’s KPIs are separate from commercial goals and are exclusively targeted at keeping our games safe. These are reviewed every year to make sure they’re relevant to current challenges.

These are big numbers we’re sharing with our players, so it’s also important to put them into context. One of the best ways to do that is against some of the big numbers we report as part of a publicly listed company.

So, we do intend to share more in the future. For now, it’s simply a question of context, scale and practicality.

According to the infographic, the percentage of reviewed collusion cases that are acted upon is 94% (2,687 / 2,848). How much of this is related to poker houses / stables, and what else are the numbers attributed to?

Each case is treated on an individual basis. We don’t generally monitor which players are part of a stable, so it’s not possible to provide an estimate here.

How is a case of players at the same table communicating with each other tracked and confirmed as collusion?

To avoid giving away valuable information to potential colluders, we can’t go into too much detail on how we detect and prove cases of collusion or attempted collusion. Rest assured, though, the number of incidents of collusion is small relative to the number of players we host at PokerStars and our investigators draw on a huge number of data points during their investigations. It’s fascinating to watch.

In terms of how we arrive at a conclusion, our investigations are based on a peer-review system, which is to say that one team member initially conducts an investigation using all the expertise and tools at their disposal. They reach a decision and the case is passed to another team member with a recommendation. Team member two then conducts another thorough review. If their conclusion doesn’t match up with the initial investigation, the case is passed to a third investigator and together they arrive at a final decision.

There is a much higher entry threshold for those who want to try to use a bot than there is for players who engage in types of soft play and collusion with friends here and there. Naturally, this leads to a higher number of cases where we investigate collusion, as reflected in the numbers here.

Regardless of the kind of infraction, however, we approach each case with the utmost seriousness. That goes for those we detect ourselves as well as those submitted to us by our players.

We invest millions of dollars in game integrity and we’ve been building our expertise for almost two decades. We draw on our experience of more than 200 billion hands dealt and use highly advanced tools including machine learning to stay ahead of technical advances and equip our game integrity experts with everything they need to come to a satisfactory conclusion and meet our primary objectives: offering the best playing experience, providing the most rigorous customer protection, and delivering the highest standards of game integrity.

Only 15% (105 / 709) of bot investigations are acted against.  Why is this percentage so low? What qualifies a suspected bot account of being cleared?

As we mentioned earlier, we investigate all allegations of wrongdoing, whether we detect them ourselves or they’re submitted to us. What a player believes to be a bot based on a relatively small number of hands might very well look different when we look at the complete picture. A low percentage of cases acted against versus cases investigated doesn’t necessarily indicate a lack of evidence to punish wrongdoing. It simply indicates that we investigated an allegation or red-flag and concluded that no action needed to be taken.

It’s also important to note that the number of such cases at PokerStars is relatively small, especially when compared to the number of players on the site.

Is there the possibility of any cleared accounts being miscategorized, and actually being bots?

The tools we use to detect and investigate such cases are multi-faceted, incredibly sophisticated, and always improving. No system will ever be right 100% of the time, but our goal is to get ever closer to that number.

If we find evidence of wrongdoing, we always act.

Only 15 of the 709 acted-against bot investigations come from the 428 player reports. How seriously are player reports taken, and how much time and resources are impeded upon by players reporting bad beats and blaming them on bots?

Player reports are investigated just as seriously as cases we’ve identified ourselves.

Sometimes, of course, players might mistake a bad beat for something else, and while that takes a little extra time, it’s what we’re here for. We have the numbers, the expertise and the tools we need to work through them.

Really, we’re just grateful that a player has taken time out of their day to do something to help protect the rest of the poker community, and we’re glad they know they have someone to go to for help.

What other aspects of game integrity are prioritized highest at PokerStars?

Whether it’s collusion, the use of bots, or targeting other players, ultimately the end goal of any malicious behaviour is the same: to gain an unfair advantage over other players in an attempt to make money. So, when it comes to investigating breaches of our terms of service, we treat every case equally. It’s the fairest thing to do.

As competitor sites ban the use of HUDs or integrate a version of a HUD in their software, what consideration to banning HUDs do you give? Do you fear it could negatively impact traffic if you were to ban HUDs?

The majority of our players don’t use any kind of third-party tool, but the conversation about their use is always an interesting debate. Some are legitimate and help players train and explore the game. Others, however, are geared at giving players an unfair advantage over others, which undermines the spirit of poker.

Each operator has its own opinion when it comes to the use of HUDs. Our vision is to limit the use of tools that give undue insight into certain real-time situations. This is why we don’t ban HUDs outright, but we do prohibit certain functions that a HUD can provide. If a HUD vendor does not comply with our rules, their software will be put on our blacklist.