The month of December on PokerGO saw the conclusion of the World Series of Poker Europe, along with the debut of two new events including the RGPS: All-Stars ProAM and PokerGO Tour Championship.

With 2021 now in the rearview mirror, attention is turned to 2022 and the debut of another new tournament series on PokerGO with Stairway To Millions. Plus, the return of High Stakes Duel is set for later in the month as Tom Dwan takes on Phil Hellmuth in Round 3 for the $400,000 prize pool. 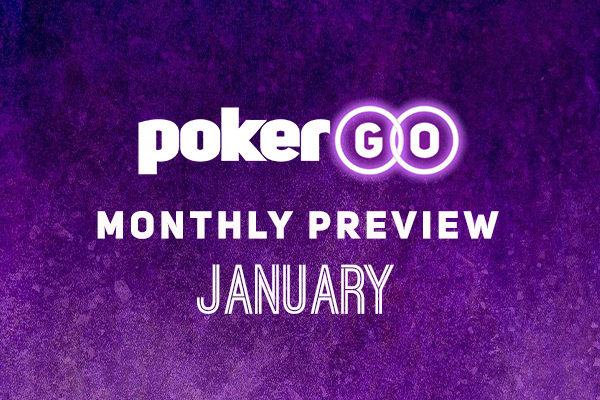 The newest event to be introduced by PokerGO will give players with a variety of bankrolls a chance to play on a live-streamed final table inside the PokerGO Studio. Stairway To Millions will begin on January 12 with eight events beginning at a buy-in of $1,000 and climbing to $100,000. There is also a total of $3 million in prize pool guarantees spread across the eight events.

All events will play down to the final table with those players returning the following day to conclude the event on PokerGO.com. Anyone that cashes will receive entry into the following day’s event.

High Stakes Duel III is returning this month with Tom Dwan in the winner’s seat following his Round 2 victory over Phil Hellmuth. Dwan will be playing for the $400,000 prize pool against Hellmuth who will be seeking revenge after Dwan ruined his seven-match win streak that included three wins each against Antonio Esfandiari and Daniel Negreanu, and one over Fox Sports 1’s Nick Wright.

Dwan and Hellmuth will face-off for the $400,000 prize pool, and for the first time in High Stakes Duel history, there will be a Round 4. If Dwan manages to defeat Hellmuth again, he will have reached the three consecutive match threshold and will progress to Round 4 where $800,000 will on the line for Dwan and his opponent.

What Did You Miss in December?

The World Series of Poker Europe crowned a champion in hometown hero Josef Gulas Jr. who collected €1,276,712 in prize money for triumphing over the biggest WSOP Europe Main Event field of all-time.

The season-ending RGPS: All-Stars ProAM would see a field full of qualifiers, poker professionals, celebrities, and industry notables as Day 1 played down to the final table. Garry Gates, Ebony Kenney, and Danielle Andersen were a few of the notables making it through to the final day, but it would be Florida’s Raminder Singh emerging victorious to win the $10,560 first-place prize.