Dirty Poker – that’s the title of a black-covered book I was given by Carl P., with whom I have become friends at the local senior center. We met when I gave a talk about the benefits of playing poker (other than the money you might win). He also donated a miniature deck of cards as a prize at our Seniors’ Poker Group.

Dirty Poker is all about cheating at poker. It was written in 2006 by Richard Marcus who, apparently, has made cheating in games of chance as his life’s career. Marcus claims to know all the ways to cheat. 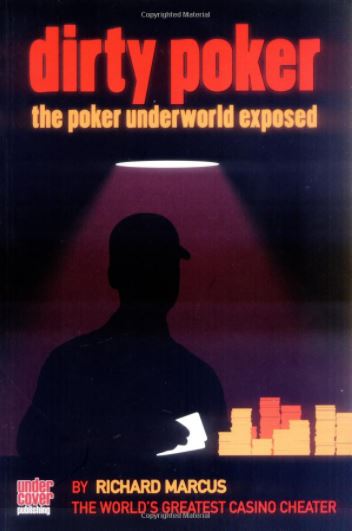 Have you ever wondered if you had been cheated during a poker game – especially when you are a big loser? Do you know about collusion, marked cards, and other possible ways to cheat? According to Marcus, cheating in poker is most common in higher stakes games. While most cheating occurs in private games, it also happens in card rooms, casinos, and online.

I imagine that if this book had been written nowadays rather than 12 years ago, it would’ve covered more “recent” topics like the safety of playing at Bitcoin Poker sites. Regardless, just because it’s an “older” book doesn’t mean its content is too dated. Of course, there have been great technological advancements that have made security in both live and online poker games far better, tighter, and more impenetrable these days than back in 2006. Nonetheless, as per the book’s title, at the very least Marcus provides us with an intriguing look at poker’s “underworld” of days past.

To better understand what Dirty Poker is all about (you can purchase it on Amazon, by the way), let’s look at the chapter headings. I will add a few pertinent comments:

Chapter One: “Who are Today’s Poker Cheats?”

Chapter Four: “Why Professionals Cheat; The Psychology of Poker Cheating”

Chapter Five: “The Evolution of Poker Cheating; A History of Who Cheats and Why”

Virtually all forms of cheating may occur in home games, according to Marcus. “Marked cards” are easily created. “Stripped cards” are shaved on one side, so adjacent unshaved cards protrude ever so slightly. A “card mechanic” can slide back the top card in the deck and deal out the next. “Palming chips” is a way to sneak chips out of the pot. “Anglers” use opportunities to gain key information, thus enjoying an edge. (Some might say that the Esther Bluff is a method of angling – to get into your opponent’s mind.) Watch out for a player who “misdeclares” his hand at the showdown and his opponent obliges by mucking his hand putting it out of play – one that would have taken the pot. And, of course, there are also collusion scams. (Ed. Note: This is perhaps the section of the book that remains most relevant.)

Chapter Nine: “Where Will It Go from Here?”

In George Epstein’s next column, Part II, he elaborates on collusion – the most common form of cheating at the poker table – and other forms of cheating. Be warned…