Okay – admittedly, it’s a bit surreal to be writing a poker blog entry about something that happened to me, as I mostly cover happenings in the poker world. But what happened to me last night simply begs for some sort of a headline. 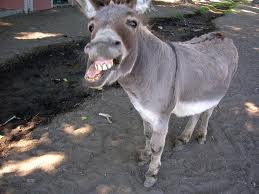 So I’m driving home from a poker game (in which I won $100) and it’s about 2:30 a.m. On the way to my town, we pass by a small village, located just to the right of the road. While driving uphill, all of a sudden, a donkey runs from the village straight out to the middle of the road.

Shocked, I immediately swerve to avoid hitting the donkey, but lose all control of the car. I crash into a barrier, do a full 180-degree turn while skidding about 50 yards down the road, and crash again into concrete staircase (ouch!). Thankfully, the side airbag deployed and aside from some shoulder pain, I’m doing fine. The car, however, was essentially totaled.

My friend, who played in the game as well, was driving behind me and saw me swerve, but was also caught off guard by the donkey (who hadn’t moved an inch!!!). He drove right into the donkey, which cracked his windshield and busted up the passenger’s side of his car, but thankfully he escaped with no injury whatsoever.

The donkey? Apparently completely unfazed (and with nary a scratch on it), just walked away down the road as if nothing had happened.

Moral of the story? Sometimes, no matter how in control of a situation you might be, whether at the poker table or on the road, there’s simply nothing you can do to avoid bad luck, and the donk will walk away the winner.

Do you like it when I share some personal poker stories? Let me know in the comments section below. If so, perhaps I’ll consider doing so more often in the future.

I agree with the moral of the story, but was that a bionic donkey or was your friend driving a mini cooper ? 🙂