Home POKER OP-EDS Poker as an Olympic Sport? Here's The Only Way It Could Ever Happen
POKER OP-EDS

Poker as an Olympic Sport? Here’s The Only Way It Could Ever Happen

This evening, London time, most of the world will be watching the Opening Ceremonies of the Olympic Games. Every four years, the best athletes from around the world gather together to compete for supremacy and glory in dozens of different sports disciplines. The sport of poker, however, is on the outside looking in. 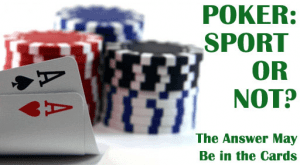 Poker IS an Internationally Recognized Sport

In 2010, the International Mind Sports Association (IMSA) accepted poker as a game of skill. Since the International Olympic Committee recognizes the IMSA, poker thus qualifies, at least in principle, for inclusion into the Games.

In practice, just like other “more traditional” sports, poker incorporates talent, endurance, and strategy, especially in tournament format. Moreover, the most prestigious poker tournaments played around the world see an ingathering of the best players in search of titles, much like tennis and golf (tennis is of course an Olympic sport and golf will be for the first time in 2016).

If the article written by ESPN’s Gary Wise a couple years ago is anything to go by, however, most poker personalities believe that the concept of Olympic poker is too far-fetched. 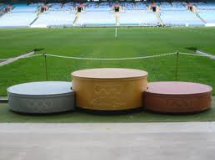 No pro poker player has ever ascended an Olympic podium

‘Cuz It’s All About the Money

Unlike other sports, the ultimate barometer of success in poker is primarily defined by money won. If you’re a professional poker player, titles and bracelets are great to have – career goals even – but the bottom line is the size of your bankroll. Whereas fans of most sports reference how many titles an individual or team has won to know who’s the best, poker fans inevitably look to the all-time list of career earnings, atop which currently sits Big Drop for One Drop winner Antonio Esfandiari.

And that, my friends, is exactly what’s preventing poker from obtaining Olympics-ready status.

But NOT at the Olympics

For poker to ever appear on the Olympic stage, for once it has to NOT be about the money but rather about pure competition and national pride. Every Olympian who makes a living as a professional in their sport chooses to forego the idea of large prize purses when it comes to the idea of competing at the Games, including multimillionaire NBA players. The idea of bringing home a medal for one’s home country resonates as far more powerful – and that’s something the players and the poker community as a whole would have to accept.

If somehow that were to happen, we’ve got some great ideas as to how Olympic poker competition should look.

More on that in our next poker blog post…