Ignition Casino has been around since late 2016, but its history actually goes back way before that. You see, Ignition was formed from the existing poker room of Bovada, itself a descendant of the long-lived and respected Bodog sportsbook, casino, and poker site.

The Bodog poker room got its start in the early 2000s. In the crowded field engendered by the poker boom of that era, it was basically a medium-sized operator without much to distinguish itself. However, following the passage of the UIGEA in 2006 and Black Friday in 2011, it became one of the few organizations still serving the USA gray market under its newly created brand, Bovada.

Bovada quickly became the largest offshore poker site serving the United States, and when Ignition purchased Bovada’s poker-related assets in the latter half of 2016, this new poker room inherited this distinction as well. Although Bovada has since re-entered the USA online poker market, its partner site Ignition remains also. Bovada and Ignition have the highest player traffic of any online poker site now open to Americans.

Although controversial at first, Ignition’s recreational player model is probably responsible for a fair share of its success. First instituted in 2011 on Bovada, it is a significant differentiator between Ignition (along with its sister sites) and other, more run-of-the-mill internet poker rooms.

Under this policy, no player is ever identified by screenname, instead being referred to by a randomly generated player number. Thus, tracking packages like Holdem Manager and Poker Tracker cannot bring up long-term stats on anyone. Moreover, table selecting is impossible because the software automatically finds a seat for players in cash games after they select what game and stakes they would like to play. Both of these elements combine to prevent casual users from being fleeced too rapidly by professional card sharks, and it leads to some very soft tables.

Ignition actually serves Australia in addition to the United States, having opened its doors to The Land Down Under in July 2017. Besides poker games, it also has a robust casino section. The Bodog Network has since been renamed PaiWangLuo, and this is the network that Ignition is a part of today. 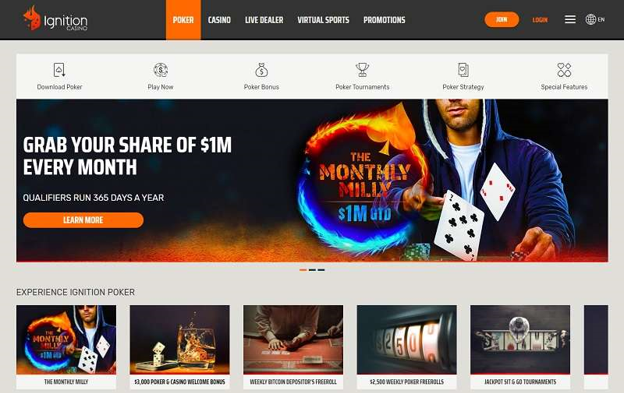 Unlike some of its competitors that feature online satellites to major live events, like the World Series of Poker, Ignition Poker keeps its endeavors focused on providing card games over the internet. This is probably part of a deliberate strategy to keep a low profile and avoid running afoul of officials in various countries who might look askance at an offshore gaming site sending players to live tournaments held in these territories.

Ignition has a plethora of tournaments for players of all bankroll sizes from MTTs costing a dollar or less to those that require hundreds of dollars to enter. Many of these tourneys come with sizable guarantees attached, leading to a schedule with more than $2 million in guaranteed prizes every week.

There are few rebuy and add-on tournaments on the menu. Most of the contests are freezeouts although sometimes re-entry is allowed. Apart from the largest guaranteed events, the late registration periods tend to be no more than a couple of hours, so MTTs generally play down to a winner more quickly than at many other sites.

Once a month, Ignition hosts a Monthly Milly: a $500 + $35 event that boasts a guarantee of $1 million. There have been shortfalls in participation in the Monthly Milly before, leading to six-figure overlays.

A few times a year, there’s a tournament series, like the Black Diamond Poker Open and the Golden Spade Poker Open, at Ignition Poker. These consist of dozens of events, sometimes more than 100, and total prize pools that can climb into the eight-figure range.

Whenever there are big tourneys coming up at Ignition, opportunities to win seats for less through satellites abound. These qualifiers are generally divided into two types: satellite multi-table tournaments and SNG steps.

There are four types of big-bet ring game poker variants spread at Ignition. The most popular is NL Hold’em, followed by PL Omaha and PL Omaha/8. Blind levels run from $0.02/$0.05 to $10/$20. Table sizes are six-max and heads-up. There are also nine-player games but only for NLHE.

Speaking of lobbies, the regular cash games don’t have any. It’s not possible to observe any tables or even view what games and stakes are running. There are no waitlists.

The way seating works is that a user must choose the game type, betting structure, table size, and stakes that they want to play. Then the software seats them at a matching table or opens a new one.

Another type of cash game is fast-fold Zone Poker. This is reminiscent of RUSH Poker at the old Full Tilt or Zoom at PokerStars. Whenever you fold a hand in Zone, you move immediately to a new table against different opponents and begin a new hand.

Zone Poker is offered in NLHE, PLO, and PLO/8 forms. Stakes run from $0.02/$0.05 to $2.50/$5.00, but every type of game is not offered at every blind level. Unlike with standard cash games, Zone stakes and pools are viewable in a lobby, which shows how many people are active in each pool. However, if there are more than 50 individuals playing in a single Zone pool, this information is displayed just as “50+”.

Though the Bodog Group used to dabble in select partnerships with a few prominent players, such as David Williams and Evelyn Ng, those days are behind it. Ignition also elects to focus its marketing efforts in other directions, and sponsorship of big-name pros is not really practiced here.

Upon making an initial deposit at Ignition, customers get a 150% up to $1,500 bonus if they use crypto-currency. The crypto coins supported are Bitcoin, Bitcoin Cash, and Litecoin. The bonus for non-crypto depositors is 100% up to $1,000.

This bonus isn’t granted upfront; rather, it’s unlocked by a player collecting Ignition Miles during the 30 days after their bonus is issued. 30 Miles is sufficient to unlock $1 of bonus money, and every dollar in rake or tournament fees paid generates 15 Miles.

The rate of earning Miles in Jackpot Sit & Go is different at 1.5 Miles per dollar of buy in. Calculations show that this form of lottery poker actually serves to clear the welcome bonus at a faster rate than ring games, normal SNGs, or multi-table tournaments.

There is also a distinct casino bonus that’s the same size as the bonus for poker.

Playing Ignition Poker on Your Devices

The standard and oldest way to access Ignition Poker is by downloading the software, for either PC or Mac, and running it on a desktop computer. In addition, there’s a web-based poker client. It works with iOS, Android, and virtually every other operating system in existence that has a modern web browser. 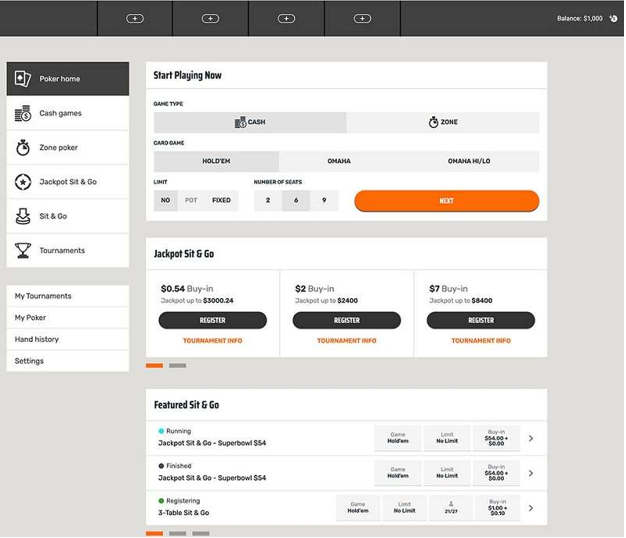 The web poker room initially had only a few types of poker present, but since its launch, it has been slowly expanded until it now contains all the games and tournaments that are present on the desktop version.

Ignition Poker is licensed by Curacao eGaming. This license allows it to transact in various areas around the world. Right now, Ignition only accepts players from the United States and Australia, but this is because of its own business decisions rather than any restrictions imposed by its licensing jurisdiction.

Ignition Casino was originally licensed by the Kahnawake Gaming Commission, but this didn’t last too long. Kahnawake soon announced that it would no longer license entities that transacted in the US market, so Ignition had to obtain licensure elsewhere.

Ignition is owned by Lynton Limited, a name that is also associated with Slots.lv and Cafe Casino. The structure of this organization is purposefully obscure, and there’s hardly any information about it on the internet.

It is relatively well-known in industry circles that Lynton Limited is heavily associated with Bovada and Bodog. Ignition is part of the same group of companies that tend to have similar games, promotions, and cashier functionality. Therefore, the gaming experience at Ignition is very close to that at Bodog, Bovada, and the other interrelated operators.

Answer: Yes, Ignition has done business with US customers since its inception, and it has not reversed this policy at any point since then. The only exceptions are four states whose residents are prohibited from playing at this site: Delaware, Maryland, New Jersey, Nevada.

Answer: Yes, it’s possible to enjoy multiple games at the same time at Ignition Poker. However, there’s a limitation of no more than four cash game tables open at once. The corresponding figure for tournaments and sit-n-goes is 20 tables active at a time, which is likely enough to satisfy even the most hardcore MTT grinder. In the web poker client, however, the upper cap is four tables of any type simultaneously.

Answer: Yes, there is a system of rewards for frequent Ignition players. However, the entire idea of rewarding regulars kind of goes counter to the recreational-friendly philosophy of this room. Thus, it may come as no surprise that there isn’t much value associated with this program. Customers can trade in their Ignition Miles for tournament tickets and casino bonuses, but the rate of exchange is pretty negligible, amounting in most cases to less than 1% of the rake paid.

Answer: The key to releasing the signup bonus lies in the Ignition Miles that are earned any time rake is paid or a tournament is bought into. Whenever 30 Miles are collected, a $1 portion of the welcome bonus turns into unrestricted cash and is added to the user’s real money balance. 15 Miles are awarded for every $1 contributed in rake or paid in SNG or tournament fees. 1.5 Miles are awarded per $1 buyin in Jackpot Sit & Go games. The bonus expires after 30 days, and the remainder of the bonus that has not been redeemed by that time is forfeit.

Question: Can I wager my welcome bonus on casino games?

Answer: No, it’s impossible to wager the poker bonus in the casino. However, there is a separate casino bonus that’s added to your account when you make your first deposit. It is a 150% up to $1,500 match as long as you deposit with crypto-currency. For those who choose to use more traditional cashier methods, this drops to a 100% up to $1,000 casino bonus.