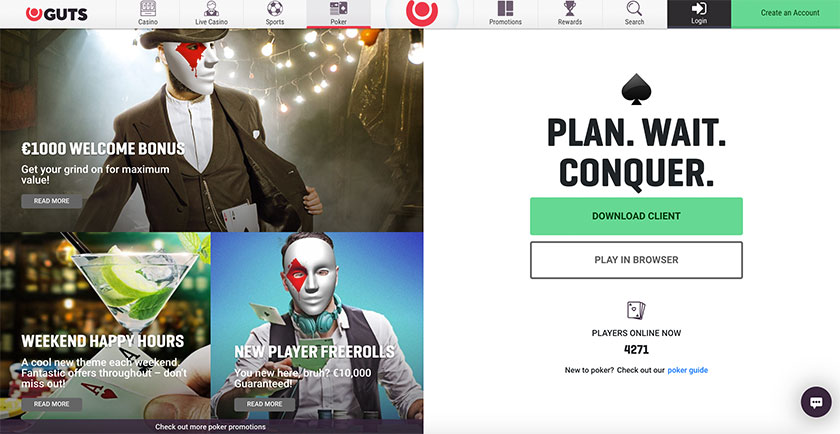 Compared to its competitors, Guts Poker’s history is not exactly as extensive. The current iteration of the Guts brand only started its operations in 2013 and, at that time, it only featured an online casino section. Eventually, the brand began offering poker room play in 2016. Since the time the brand’s poker room went live, it has gradually found itself gaining more players. A big reason for this is quite possibly due to the brand’s ownership and management. As of this writing, Guts is operated by Malta-based MT SecureTrade Limited, which is a subsidiary of Norway’s Gaming Innovations Group Inc. Other than the brand’s top-notch management, another reason for the brand’s increase in popularity since it started operations is its use of Microgaming Poker software.

It should also be noted that EveryMatrix used to own the Guts.com prior to Guts Gaming Ltd. (now MT SecureTrade Limited) secured it back in 2012. Similar to now, the EveryMatrix-managed Guts back then also featured a poker room, online casino, as well as a sportsbook section. When the brand and domain were relinquished in 2011 though, the players found their accounts migrated to JetBull (another EveryMatrix-managed brand).

While it might be relatively new, players can already expect to get a chance to join live tournaments affiliated with Guts Poker. Thanks to being part of the Microgaming Poker Network, the poker room is able to offer packages for events in the MPN Poker Tour. For example, players who registered with the poker roomhad the chance to participate in the Prague leg of the MPNPT. The Main Event of this leg of the tour had a guaranteed prize of €200,000 and players could qualify by winning the satellite tournaments held by the poker room. If they managed to win the satellites, players could enjoy a €1,500 MPNPT Package which included a €550 entry to the Main Event, a €55 entry for the side event, €200 in travel expenses, and accommodation for four nights at the Hotel Grandium.

Other than the MPN Poker Tour legs, the poker room is also affiliated with The Battle of Malta. This is a yearly poker tournament held in Malta that has a whopping €1 million in guaranteed prizes for players. Much like with the MPNPT, the poker room also has satellites that players can join to win a €1,500 package (similar with what they can get from winning the MPNPT satellites) for the tournament’s Main Event. 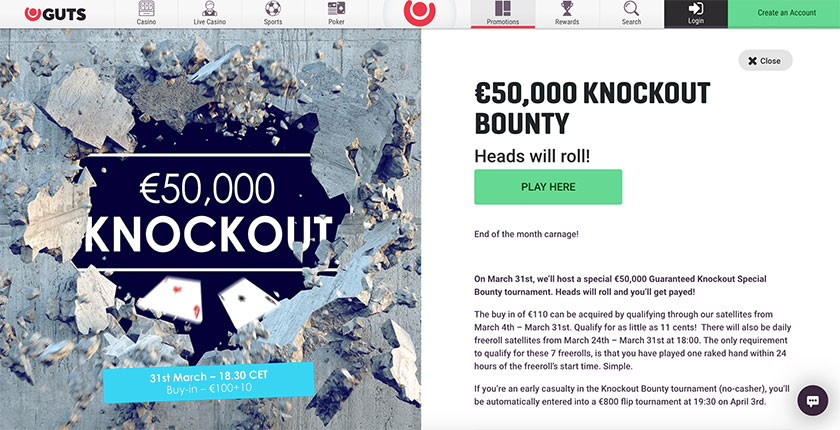 Players who might not be too keen on joining live tournaments would still enjoy Guts Poker thanks to its wide range of online tournaments (and cash games). If they’ve just registered, players can take advantage of the poker room’s New Player Freerolls. By joining these set of tournaments, new players will have the chance to boost their bankrolls for next to nothing. In order to join though, the poker room will require players to fund their accounts first. On their first deposit, players will then receive 28 tickets that they can use to join the €50 New Player Freeroll Level 1 Tournaments that are available on a daily basis (over the course of four weeks). After they’ve played 10 hands of Texas Hold’em, the poker room will then award players with eight tickets for the New Player Freeroll Level 2 Tournaments that are available twice a week and run over the course of four weeks (similar to the Level 1 Tournaments).

Aside from the New Player Freerolls, Guts Poker also offers Fish Royale. This tournament is held daily with a minimal buy-in of €3.30. While each event in the tournament series offers €300 in guaranteed prizes, there is a special feature that allows players to instantly win a €1,500 MPN Poker Tour package (similar to the one they’ll get by winning satellites), namely by hitting a Royal Flush at any time during the tournament.

Players who want to join more online tournaments can also try out Fish Party Sit & Go tournaments (a staple of MPN skins). Gameplay is going to be a little different but these progressive jackpot tables are still going to be rewarding for even for casual players. Other than these, players can also check out the poker room client for a host of regular daily tournaments that they can join for as low as €.50. 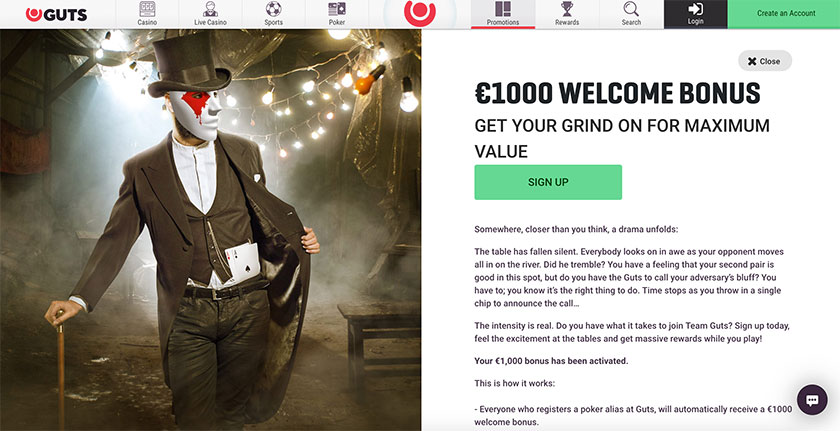 Guts Poker’s welcome bonus offer has largely stayed the same since the poker room debuted. After registering with the poker room, players will get a generous bonus package. This package consists of a bonus that can rise to €1,000 as well as the tickets for the New Player Freerolls mentioned earlier. It should be noted though that players aren’t given the €1,000 bonus outright. Instead, the poker room will release the bonus in increments of €5. To process the release of an increment, players will first need to generate a total of €25 in rake. Another important feature of this welcome offer is that the poker room will only give players 60 days to complete the bonus. Of course, this is to be expected from poker rooms when it comes to bonuses like these. Considering the bonuses released don’t have any wagering requirements, however, this offer is still very much in favor of players. Once a bonus increment is released, players will have the freedom to withdraw it anytime or use it for buy-ins.

While players can also access the Instant Play client on their mobile devices’ browsers, a dedicated Guts Poker app is still unavailable. Much like on desktops/laptops, mobile Instant Play is going to be limited. It should be noted though that there is still a chance the poker room will come up with a dedicated app on mobile. After all, the poker room has only been in operation for around 2-3 years. With the poker room (and the brand in general) continuing its steady growth, a dedicated mobile app could be developed to accommodate more players who wish to access it on the go. For now though, the Guts Poker mobile experience is still good enough for casual and even seasoned players.

In terms of licensing, Guts Poker is a lot like other brands owned and managed by the Gaming Innovation Group through MT SecureTrade Limited. The poker room (as well as other sections like the online casino and sportsbook) is able to operate on a license issued and regulated by the Malta Gaming Authority as well as the UK Gambling Commission. Thanks to these licenses, the brand is able to accept players from the UK as well as from Scandinavian countries such as Norway, Sweden, and Finland.

Aside from renaming the company, the new ownership also bought the Guts.com domain from EveryMatrix NV and established a fully owned gaming subsidiary called Guts Gaming Ltd. In 2013, the new Guts.com was launched and it initially offered sports betting and online casino services for players. Eventually Guts Gaming Ltd. got renamed to MT SecureTrade Limited and went on to obtain licenses from the Malta Gaming Authority and the UK Gambling Commission in 2014. The licenses meant that the company was now a bona fide gaming operator.

By 2015, the Gaming Innovation Group managed to get listed in the Oslo Stock Exchange. The following year, the company launched another online casino brand in Rizk.com and also acquired a sports betting company called OddsModel AS. Aside from these, perhaps the most significant move the company made that year (2016) was its €54 million acquisition of Betit Holdings. As of 2017, the company’s market value on the Oslo Stock Exchange was set at more than NOK4 million.

Answer: Since GiG and MT SecureTrade Limited does not have a license to operate in the United States of America and its territories, players from that country are unfortunately not allowed to register with the poker room.

Answer: As explained earlier, Guts Poker is able to support multi-tabling provided players access the poker room through its dedicated client. Sadly, this feature does not extend to Instant Play (either for desktops/laptops or on mobile). Buy-ins are going to be limited to just one table at a time if players are using their mobile or desktop/laptop browsers to access the poker room.

Answer: Players automatically become a part of the Guts Loyalty Program the moment they register and deposit funds to their poker room accounts. The program has four levels with players starting at Silver then progressing to Gold, Platinum, and finally Diamond. To progress, players will need to fulfill the Loyalty Points requirements of a level. This is easily done by playing in real money tournaments and/or cash games available in the poker room. As they progress, players will get to enjoy cashback commensurate to their levels. Getting to Silver will net players a 10% Cash Rewards cashback while those who manage to progress to Gold, Platinum, and Diamond, will enjoy cashbacks of 15%, 20%, and 30%, respectively.

Answer: Unlike casino bonuses, Guts Poker’s welcome bonus is not given immediately to qualifying players. Instead, the poker room releases the bonus in increments of €5. For a release to be processed, players will need to have generated at least €25 in rake. Additionally, the poker room will only give players 60 days to fully collect the bonus. If players are unable to claim the full bonus by the time allotted, the remaining bonus amount will be forfeited. As for the released bonus increments, players can do whatever they wish with what they receive. The bonus money is credited as cash and has no wagering requirements. This means that players can opt to withdraw the cash straight to their preferred payment method or they can use it as buy-ins for the poker room’s tournaments and cash games.