Mixing It Up with Poker’s Finest

If you ever start speaking with me about poker, you’ll likely know within the first minute or so of our conversation that I absolutely love mixed games. I’ve been playing in a Dealer’s Choice mixed game each week as a member of my Dad’s home game group for the better part of 15 years. Recently, my own home game group has warmed to the concept of playing “not just boring old Hold’em,” too. I’ve done my best to promote mixed games via Cardplayer Lifestyle, including this memorable write-up from a couple years ago detailing how a low-stakes Vegas mixed game is the ultimate in poker fun.

Unfortunately, the player pool of mixed game aficionados is still far smaller than we’d like it to be, so it takes considerably more effort to get a game going, even in Las Vegas in the midst of the World Series of Poker. I realized earlier this summer, however, that with enough advanced notice and promotion, it could be possible to attract a sizable number of mixed game enthusiasts to participate in a dedicated Dealer’s Choice cash game evening.

Thus was born the idea of me “hosting” a game for the first time. 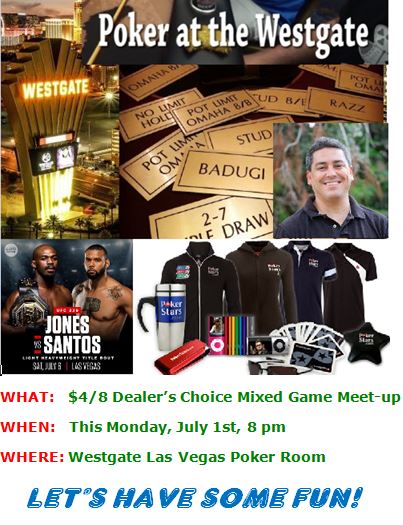 My “work” began two weeks ahead of time. When gathering together a couple dozen people, you want to make sure tables are free and that the dealers at the selected venue knew how to deal all of the games. Fortunately, I was able to secure the right poker room to host the event. Thanks so much to Jay Corpron and Chuck Palermo, from the Westgate Hotel Casino and Resort, for kindly opening up your venue to us.

Anyone who has ever hosted an event of any type knows that food and drink most certainly help facilitate better attendance. Quite frankly, I didn’t wish to be out of pocket supplying refreshments for the group. Enter PokerStars. Not only was the company happy to provide pizza and dessert for the attendees, they also were kind enough to voluntarily offer some value-added prizes:

Pizza at the @WestgateVegas … And dessert… And $4/8 mixed games 😃

Come one, come all… 2 tables running so far.

Giving away some cool prizes in the next couple hours, too

Thanks @PokerStars for supporting this evening! 🙏 pic.twitter.com/H7y2Vd6Cpu

The combination of of free food, some fun mixed game poker, and the possibility of winning cool prizes did, indeed draw people out of the woodwork. Throughout the course of the evening approximately 25 people came out to play. We had two full tables running pretty much the entire night, save for the last 90 minutes (between 3:00-4:30am). I’d say that any game running from 8pm for eight-and-a-half hours could be deemed a success.

Congrats to @schmengieBG, winner of a $150 @PokerStars Store gift card!

The $4/8 mixed game fun continues at the @WestgateVegas… Plenty of 🍕 still here for the consuming 😃 pic.twitter.com/NYTAeEIlma

Congratulations to @MollyAnneMossey , winner of the $250 @PokerStars Store voucher.

As per the title of this post, I had the good fortune of playing with some of poker’s finest on that lovely night. That’s not to say that half the attendees were bracelet winners (THAT happened in the first WSOP bracelet event I played in…), but rather that some incredibly nice and friendly people showed up at the tables.

I had fun reconnecting with friends with whom I’d played mixed games in the past, as well as meeting people for the first time with whom I’d long been in contact via social media. I also had the good fortune of meeting Matt Hansen, who has during the past month become Cardplayer Lifestyle’s newest contributing writer.

The mood was upbeat, the conversations spirited, the play action-packed, and the volume loud; just like a mixed game meetup ought to be.

And then at 11pm a special guest made an appearance…

He refuses to take a seat, but he came to commentate our $4/8 and berate the winner of every pot…

For a full hour, Norman Chad mingled with our crowd and plainly put just enhanced our group’s collective experience. I’d like to give a huge public thank you to Norman for showing up to lend his support to the initiative. Beyond meaning a lot to me personally, his presence genuinely boosted the mood of each and every participant.

The First of MANY Mixed Games to Come

When you’ve never hosted a public event of this nature before, anxiety tends to run high. Will enough people show up? Will the refreshments arrive on time? Will people enjoy themselves?

After wrapping up a meetup game that would by all accounts be declared “successful,” however, you’re abuzz with adrenaline and excitement. You immediately want to do it all over again.

The chilled, fun-filled atmosphere is addictive; you want to recreate it over and over again. You want the next event to be bigger and even better. You want to fill twice or three times as many tables.

As often as possible.

Anywhere that mixed game enthusiasts are ready to gather together. 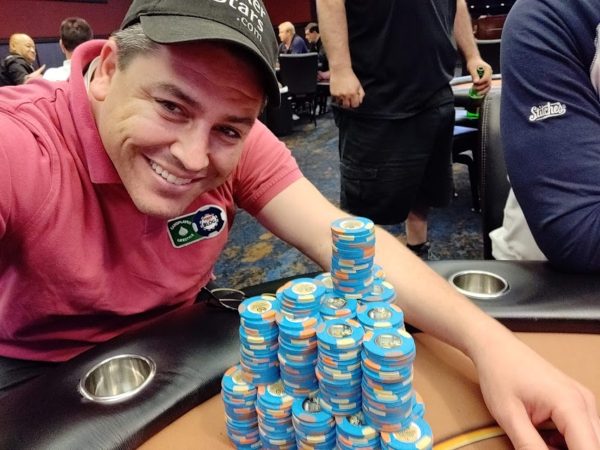 I even won some money to boot #goodtimes