Day 2 of the 2022 Mixed Game Festival II at Resorts World Las Vegas has come to an end, and Robbie Strazynski’s second celebration of poker variants is a smash hit. 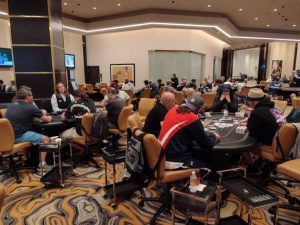 The second day of the five-day festival saw an impressive FOUR tables with simultaneous $4/8 cash game action at one point, with a notable visit from Bernard Lee and several members of the poker community. A cavalcade of new games were on offer, and Robbie even won a Razz hand!

It was bound to happen sooner than later.

I called Razz on Robbie!

Everyone is having a great time at @PokerLifeMedia‘s Mixed Game Festival!

The festival kicked off on Monday morning and by the early afternoon there were already two full tables in play; that’s in addition to the regular $8/16 mixed game that meets at Resorts World throughout the week. The gathering quickly jumped to three tables, and by late in the evening there were four tables of $4/$8 mixed games in play.

Among the steady stream of visitors were mixed game fans and members of the poker community who were in search of a break from the WSOP grind. Others were looking for a chance to catch up with old friends. PokerNews photographers Alex Rome and Hayley Hochstetler stopped by, along with PokerNews Editor Will Shillibier and Cardplayer Lifestyle contributors Christina Bradfield and social media director Chad McVean.

Longtime poker media personality and radio show host Bernard Lee was in attendance to meet with fans and sign copies of his book, Poker Satellite Success. The 2017 WSOP $1,500 No-Limit 2-7 Lowball runner-up took the time to chat and share some of the wisdom that helped earn him a lifetime total of $2.4 million in tournaments. He eventually made his way back to the WSOP, but not before promising to return to jump into the mix and splash around a bit.

Thanks for having me! Enjoyed it! I’ll be back to play some 2-7 triple draw.

The medley of variants at the Mixed Game Festival never disappoints, and Monday was no exception.

In addition to Open-Faced Chinese poker, fans were treated to some 3-2-1.

We’ve got 3-2-1 going at our table, or as our dealer Katharine informed us, Chowaha!

And a twist on the ever-so-popular Razz:

A very intense game of Action Razz, which is a fun variant of @cardplayerlife‘s favorite game.

In yet another unforeseen twist, Robbie Strazynski enjoyed a rare moment at the tables.

“I won a razz hand!” the Cardplayer Lifestyle founder yelled, before dragging the rare pot in the stud game variant. 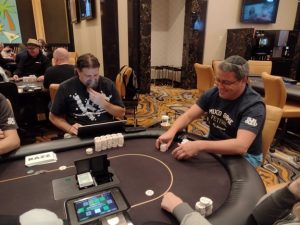 Giving away a $100 voucher to the @PokerStars Store.

But the giveaways don’t end there. Players are also eligible to win a PokerStars Live Event prize package that includes a €400 buy-in, as well as flights and hotel for a European Road to the PSPC event! Players at the Mixed Game Festival earn an entry for each hour of play before the randomized drawing is held on Thursday, June 16.

In addition to the opportunity to win great prizes, mixed game fans have more opportunities to mingle with high-caliber players this week. WSOP bracelet winner Chris Wallace is scheduled stop by on Tuesday to sign copies of his brand new book Getting Started with HORSE, which was co-written with Michael and Robert Mizrachi.

WSOP Main Event champion Greg Raymer is scheduled stop by on Wednesday to sign his book Fossilman’s Winning Tournament Strategies, and he will have a chance to revisit his HORSE tournament victory for a Platinum Pass in the first edition of the Mixed Games Festival last autumn.

On Thursday, Poker Hall of Famer Eli Elezra is scheduled to stop by to sign copies of his autobiography Pulling the Trigger and meet with fans on the final day of the festival.

Be sure to stop by Resorts World Las Vegas all week long for your chance to learn new poker variants and win some fabulous prizes while meeting some of the game’s greats! 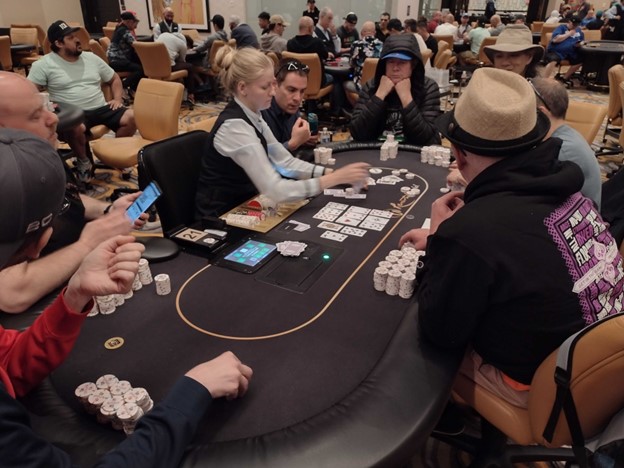