Our second mixed game festival got off to a roaring start! The action started at 11:00 o’clock in the morning and almost immediately we got two tables of $4/8 dealer’s choice poker going. 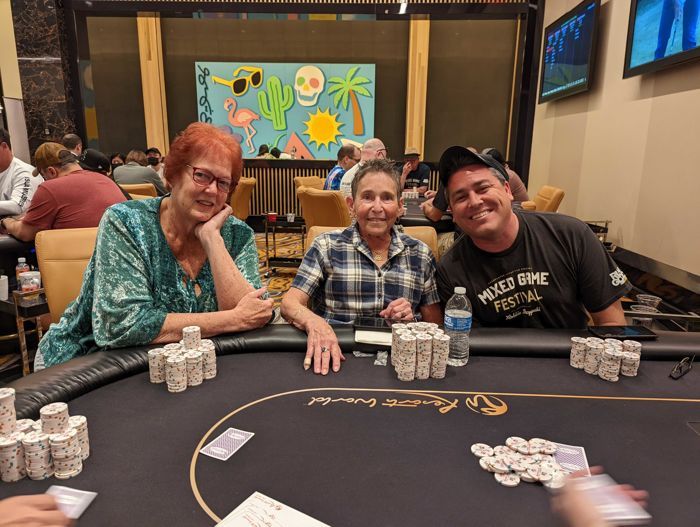 Also present were are social media director Chad McVean and Calum Grant, a past Cardplayer Lifestyle contributor who (shot the great picture above and) now writes full-time for PokerNews.

His excellent “Day 1” article can be read here: https://t.co/zrbsSQWzpr pic.twitter.com/1pw5NbDzKc

A third table, an $8/16 mix, was also running for hours on end, and players rotated and switched among the three games throughout the day. besides the regular local mixed game lovers, numerous participants flew in from around the country as well as from north of the border, in Canada. It was also wonderful to see Martin Smith, who flew in all the way from Malta for his first ever trip to Las Vegas, specifically play in our festival.

Should I tell @CGrantSport that I’m going to play event 48???

But he’s right, the mixed games festival was the thing that really convinced me to come! https://t.co/6uMmIkeEHE

Chips were flying across the felt at the resorts world poker room at a frenetic pace, and players got to enjoy a number of old mixed game favorites as well as learn some new variants of the game we all love including but not limited to “Oma-jack”, “Watermelon”, and more!

Beyond the poker we also staged a number of spontaneous giveaways including bespoke, limited edition, T-shirts from RunGoodGear, Hoodies from PokerGO, and gift bags from BBO Poker Tables which got delivered in person by the company’s founder George Chao.

Thanks for always showing us such great support! 🙏 pic.twitter.com/Gh3uHHc28A

WSOP bracelet winners Dylan Linde and Dominick Sarle showed up to play the night shift, as the shenanigans lasted well into the wee hours of the morning.

I logged 15 hours of play until I had to turn in for the night, but one table was still going when I left.

The excitement was palpable throughout the room and it was very clear from the noise emanating from our section that the fun was to be had in the dealer’s choice mix as opposed to the “regular old Texas Hold’em” tables. 😊

And this is only Day 1 😊 pic.twitter.com/1paCoG8QhG

Today, Day 2, we’ll see poker media personality Bernard Lee come in for a book signing, plus he’ll be helping to kick off the action with some good old fashioned triple draw!

He’s also going to stay and play some 2-7 Triple Draw!

Join us for some fun! pic.twitter.com/6Bk9Le5Iwv

The fun will keep on rolling until Thursday, when we’ll randomly select our grand prize winner (you get one entry in the drawing for every hour of cash game play logged), who will get a PokerStars Live Event Package to a Road to PSPC Event in one of eight European countries (flight and accommodation), plus a €400 seat into an event where they could go on to win a Platinum Pass valued at $30,000!