Lessons from My First Time Running a Poker Tour

My new tour, Next Level Poker, ran its first event on Thanksgiving weekend at Diamond Jo Worth Casino in Northwoods, Iowa. It was a beta test of sorts for us, a chance to make sure that everything works well and to get an idea of exactly how much work this tour is going to be. Most of it went well, a few things didn’t, and we learned a lot more than I ever expected. I’m really glad we did it because there are some things you can’t learn without actually doing them.

Our first lesson was about scheduling. Autumn is tournament season in the Midwest. In the summer and spring people are usually outdoors enjoying the weather and hunting, fishing, or just spending time at their cabin on the lake. For some reason everyone I know in Minnesota has a cabin on the lake. In the winter, a bad storm can completely ruin a tournament series when everyone stays home rather than braving icy roads. As such, every card room and poker tour schedules their events in the fall, hoping for cold weather that isn’t bad enough to keep players away.

This left us with very few open weekends. As the new kid on the block, we certainly didn’t want to go up against one of established competitors or schedule against something that another card room was already running and draw some of their crowd away. If we anger a card room in the area, they may never schedule an event with us and it would hurt our turnout as well.

The only weekend that didn’t already have an event nearby was Thanksgiving weekend. We really had no idea whether the holiday weekend would affect our turnout significantly because sometimes scheduling things when people have time off helps create a bigger field. And, honestly, we still don’t know how much of an effect it really had because there were so many other things affecting the size of the field. We definitely know that some people didn’t show up because it was a holiday weekend.

The size of the field was our only real issue and it helped us discover how important the domino effect is in creating big fields. A small field stays small, but if word gets out that there will be a big field, everyone wants to play and the field grows quickly. If an event draws a big field, the next one will almost always be bigger. I can’t count the number of times I’ve been at a tournament as a player and heard “How many people did they get for this last year?”

Of course, not every table in a poker room is dedicated to tournament play. Minnesota, where the majority of our players came from, doesn’t offer no-limit games. The bets are capped at $100, so anyone who wants to play bigger than $1/2 blinds can’t get what they crave at home. We brought in enough players that some very good $1/2 and $2/5 no-limit games were running at a place where $2/5 is a rarity and the players who drove south to the venue from Minnesota were excited to see the bigger games. With a small field and a juicy cash game scene, many of our players chose to play cash instead of the tournament. As such, the field never really grew to the size we wanted. If we had had 50 players in our first flight, we could have had a nice crowd, but the critical mass never happened and we had a fairly small group taking part in our $750 main event.

Diamond Jo had a ton of cash games running, which is good for them, so we weren’t heartbroken over the small field, but a bigger turnout would have been a lot more fun. Some of this was also due to our main event featuring a larger buy-in than the card room usually has, and many of the locals were not interested in buying in for $750. A $350 buy-in would have lured in a lot more players from the area. In the future we will be smarter about tailoring our buy-in size to the venue, something that most tours don’t do at all. Our competitors tend to run the same events at every stop, with the same buy-in levels. Once we are better established we might be able to do this, but our willingness to tailor things to the local players might also be another thing that sets us apart.

The players, many of whom were serious pro or semi-pro tournament players, loved the structure. Over and over again I heard about how good the structure was, and the stacks were deep at the final table which makes for a good broadcast.

The structure was amazing!! To have 16 entries in a day 1 and play through level 12 and still have 5 guys left who all still had over 20 bigs is great! Left for a lot of short handed action all day and not a shove fest. For such few entries the structure made tournament great!

We were able to refine our broadcast and end up with a good-looking production as well. As an amateur photographer I know how important lighting is, but in a live broadcast I can’t go back and fix things in Photoshop like I can with still photographs. Now I know how important it is to test all the lighting with live cameras and players in seats, a lesson I learned after the lighting on some players appeared  too dark in the broadcast of our first event.

We were also happy with the response to our trophy. I fought with my business partner over the trophy and now I’m glad that he won that argument because the huge 3D trophy with the Blue Shark Optics logo on it was very well received. Our winner didn’t even want to wait for his customized version to be shipped and simply took our display copy home with him after the event.

Most tours that offer a significant trophy take money out of the prize pool to pay for it, sometimes much more than the trophy costs. We don’t want to do that, nor do we want to charge a higher rake or take any money out of the prize pool other than the entry fee. This means that we are on the hook for an expensive custom-made trophy at every event, but if players love it, it’s money well spent.

Congratulations to the winner of our @BlueSharkOptics Championship, Max Bergquist! pic.twitter.com/zSuXNTqFuZ

We also learned that most players care less about the rake than we ever expected. As a tournament grinder I typically avoided events with a high rake and seeing an event like ours I would have made it a point to play and compliment the tour operators on it, hoping that they would continue to keep the rake low. While players commented on the structure, the trophy, the field size, and the broadcast, not a single one mentioned the fact that we charged less rake than our competitors, didn’t charge a 3% fee for staff (this was covered from the rake), and didn’t take a trophy fee. Clearly the rake is just less important to players than we expected. Overall, we charged between 20-40% less juice than our competitors and no one seemed to care.

We will continue to fight for lower costs to players and more money going directly into the prize pool, but now we know that this won’t be a primary reason that players support us. We are banking on the fact that good structures, a good broadcast, a pretty trophy, and all the extras we offer from sponsor giveaways will be enough to draw players.

Players don’t often think of the operator having to “pay a rake,” but we learned (the hard way) that there is a mountain of paperwork and expense involved. I knew it wasn’t cheap, but having to pay for vendor licenses and background checks, getting an Iowa business license, and a host of other fees and red tape was a bit of a surprise. I would have guessed that the amount would be less than half of what it was. Our merchandise table didn’t make back 10% of the fees that we paid to be able to sell things at the venue.

We also discovered that some of the extras we offered, like free batteries to charge your phone at the tables, were not as heavily used as we expected. Some people tried on the Blue Shark eye wear we offered and purchased them after wearing them for the day, and a few more took advantage of the free phone chargers, but the response was less than we expected. We did get a good response to our gear from our clothing partner DGen Wear. The stuff was great and people liked it.

We also got a good response to the broadcast where players happy to know that their family and friends could watch them at the final table. By the time the main event rolled around, we had designed a slick broadcast with important information on the screen including payouts and player names. If major sports always have the time and score on the screen, why shouldn’t we? Most viewers agreed. A few complained about the lack of hole cards, but the Iowa gaming Commission doesn’t allow hole cards to be broadcast and we think it went well without them.

The response to our contests was also unexpected. Our simple retweet contest got over 100 entries, but very few players offered up pics of their local home game to try to win a seat. The Facebook contest got the biggest response, and we definitely learned some things from that. Notably that people don’t get much poker information from print media these days and that sites that list poker tournaments, like HendonMob’s tournament list, are their primary source of information.

The two graphs below indicate the response to our two-question quiz that 126 players answered in order to enter the contest. I also found it interesting that so few players listed field size as the most important factor when it appeared to be the biggest factor for many of the players who showed up at the event and then chose not to play. The very small section of the pie for rake numbers reinforces how little importance players seem to put on this. They may complain about it, but it isn’t a big deciding factor in whether they play an event. 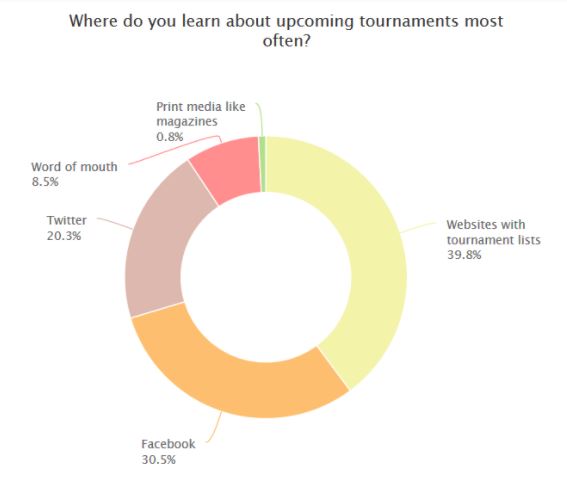 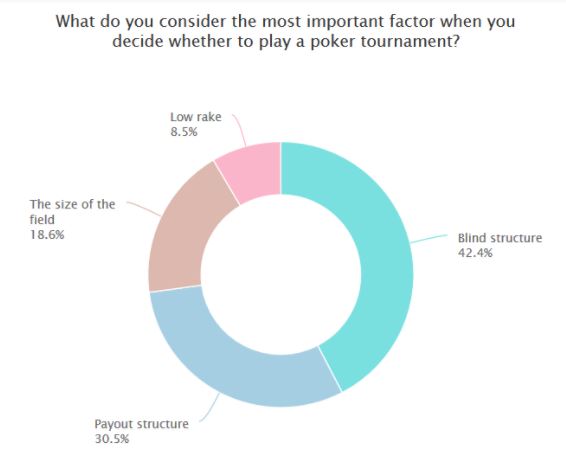 We had a lot of fun, worked our butts off, and met some great people from the local area. The staff at Diamond Jo was amazing and incredibly helpful, and we hope to be back there again soon. And all three of us made a profit in the cash games, so you know they were soft!

From all of us at Next Level Poker, have a great holiday season and we hope to see you at our next event!