Once in a while we’ll be discussing some of the hands that take place on season 6  of High Stakes Poker. The Mori Eskandani-produced gem of a poker TV show continues to trailblaze and bring us poker fans along for the ride at some of the most entertaining and intriguing poker games ever held. With pots regularly climbing into the six-figure range, it’s absolutely riveting to watch. Ah, and those lovely bricks of cash. DROOL!

But first, let’s discuss new host Kara Scott. Scott, known to those who watch the WSOP as “Kara Scott Chad” – so named by admirer and fellow color commentator Norman Chad – replaced A.J. Benza as Gabe Kaplan’s new broadcast partner. An exceptionally talented broadcaster, Kara has been known to perform well at the poker felt, too.

Honestly, while I can’t argue that it’s a lot more pleasant to see her onscreen (no offense A.J.), I kind of miss Benza’s straight man complement to Kaplan’s comedic wit. The two had a great patter and banter back and forth over five great seasons of HSP, that I’ll miss. I imagine I’m not the only poker fan who feels this way either. Hopefully he’ll rejoin the broadcasting team at some point in the future. 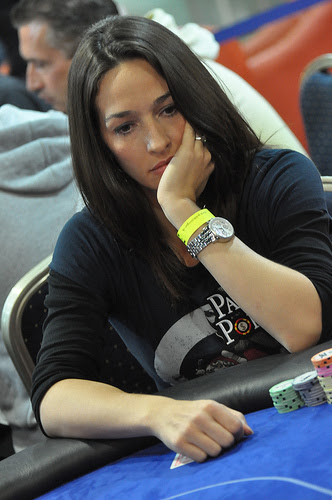 I guess it makes sense to give Kara Scott a chance though. Her sit-down chats with the players are a nice addition to the show, similar to the hostess talks with players on Poker After Dark. I guess the producers saw a winning segment and are trying to duplicate its success. In that regard, they ought to be commended; the show is already spectacular and here they are still tinkering with ways to improve it further.

Speaking of new additions to the show, I like that in addition to odds calculators, High Stakes Poker has begun showing the number of outs a player has, along with the specific outs (on the top of the screen) in showdown situations. This is a great educational add-on that is sure to please poker novices eager to learn more about the game. So many of us don’t have the time or patience to sign up to the best poker training sites and study the game seriously, so watching shows like High Stakes Poker is a great way to passively improve our own games. One small flaw with the current screen layout, however, is that it doesn’t eliminate cards we’ve seen dealt to other players in the hand – same problem for the odds calculator – but perhaps they’ll get that kink worked out at some point.

By far, High Stakes Poker is the best poker show. I hope that it continues airing for many years to come.

Favorite moment of 1st episode: When Phil Hellmuth busted out! You gotta love when someone who feels so strongly that they deserve to win has a rough time… especially against players from Northern Europe 🙂

In future poker articles, we’ll be continuing to recap our favorite High Stakes Poker episodes along with listing the highlights of each show.