In the Name of the Father, the Son… and the Poker

My Dad first taught me how to play poker when I was a little kid. Hold’em wasn’t really a thing, but 5-card draw and 7-card stud were simply delightful.

I very much AM an OG though, LOL…. that’s me, my Dad, and my grandpa playing 5-card draw pic.twitter.com/Qt77UBag49

Back when we used to live in Los Angeles, Dad used to play in a long-running home poker game with my uncle, older cousin, and their close-knit group of friends. There was a “rotating host”, with the game being held at a different player’s house each week. Whenever Dad hosted the game, it was up in the room on top of the garage. There was always a massive spread of food and drink — everything from a deli platter to cookies, cakes, soft drinks, and adult beverages — and the raucous noise from the room never failed to seep out back into our house. I always found some excuse or another to go “visit” for a few minutes. The games and pretty poker chips just enchanted me.

The Mirage opened just after I turned eight years old. The debut of the first-of-its-kind megaresort marked the beginning of Las Vegas’ “family fun” period. Indeed, up to half a dozen times each year, our family would drive out to Las Vegas for weekend getaways. My brothers and I would enjoy the pool and the arcade games, while Mom would play slots and Dad would play poker. We tended to stay at the Mirage and Treasure Island; after all, why waste all those comped room offers we’d regularly get in the mail? Luck tended to smile upon my parents, as it seemed they always left the casinos with more than they had arrived.

The first time I ever played poker with my Dad for real money was when I was 16 years old. A number of older cousins, uncles and my Dad got together to play and I was watching. Dad asked me if I wanted to join. Terrified, but excited beyond belief, I said “I don’t have any money here, Dad; you know that.” He said “don’t worry, son; I’ll pay.” I had the absolute best time of my life. I also lost $90, which might as well have been $1 million. Dad didn’t care though; he was happy his son had a good time.

As poker started booming around the world in mid-2003, I got caught up in the frenzy, too. I started organizing nickel-and-dime home games as well as the occasional tournament. My Dad and I ended up seated next to each other in the first charity poker tournament I ran, back in 2004. 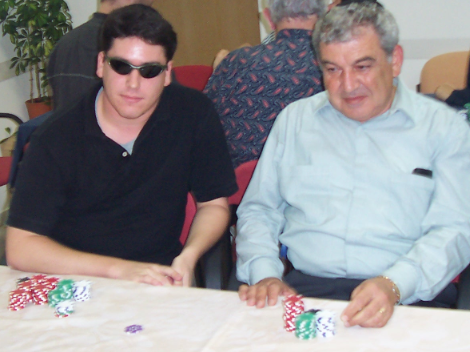 My Dad’s home game group here in Israel initially formed right around that time as well. They didn’t just play hold’em though. They played all the mixed games (and then some!). Best of all, I was invited to join them!

It’s a rough estimate, but considering the game has mostly been running on an approximately weekly basis, I’m pretty certain that he and I have probably played a good few thousand hours of poker together over the years.

Sometimes he takes a break and sometimes I take a break, but through thick and thin, Dad’s always been there with me, both at and away from the poker tables.

My Dad hasn’t played poker for 6 months. He finally returned to the home game tonight.

Living here in Israel, however, we never really had the chance to play together outside of those home games. In fact, only just twice prior to this month had I ever had the good fortune to play poker with my Dad in a proper poker room. Once, for about an hour, in 2016 at Harrah’s Las Vegas and this past summer for about three hours at the Borgata in Atlantic City.

What a special opportunity to play poker at @BorgataPoker with my Dad. ❤️

Gonna hold on to this memory for a long time. pic.twitter.com/2iLDB1dP0i

We obviously both love poker, but part and parcel of what I enjoy so much about playing in the home game is that I get to spend all that time with my Dad.

For years, the best part of playing in my Dad’s home poker game has always been the few minutes we talk at the end before saying goodnight to each other.

Never thought to take a picture of it until now.

So important to remember the good times.

Dad Taught Me to Play the Hand I’m Dealt

For the first couple weeks of February, I was working very hard on hopefully being able to stage our second ever Cardplayer Lifestyle Poker Mixed Game Festival in Las Vegas.

Everything was proceeding swimmingly and we were literally one signature away from moving forward with it. Unfortunately, right at the last minute, due to unforeseen circumstances, it fell through. It was supposed to have taken place between March 6-10. Alas, we’ll have to wait until this summer…

A couple days after that happened, I had a really nice extended lunch date with my Dad. He had been absent from our home games for a little while, so we hadn’t had a chance to see each other much over the last couple of months. During lunch, I mentioned to him what had happened, about how we were THIS close to locking in the festival. He empathized with me, but there was also something else uniquely different in his look that gave me pause.

Sensing something, I spontaneously asked: “Dad, just out of curiosity, would you want to come to Las Vegas with me in a couple weeks?”

His eyes lit up like I hadn’t seen in a long time. “What do you mean, Robbie?” he asked. “I mean, me and you, together, for a week, just spending time together, enjoying each other’s company on vacation… and playing lots of poker,” I responded.

A smile spread across his face. “I would love that” he said.

Fast forward a bit… and with the blessings of two of the most amazing women in the world — Dad’s wife Judy and my wife Miriam — we were all set to go.

By that night, literally within just a few hours, I had tickets, hotels, and a rental car all booked. That might sound trivial, but when you live 7,500 miles away in Israel it’s a pretty darn big deal! 😃

Life is short. Create experiences so you can have treasured memories with those you love. ❤️

If you see us there, come get yourself a free @PokerLifeMedia patch. 😃🛫 pic.twitter.com/qgCdq6Kk35 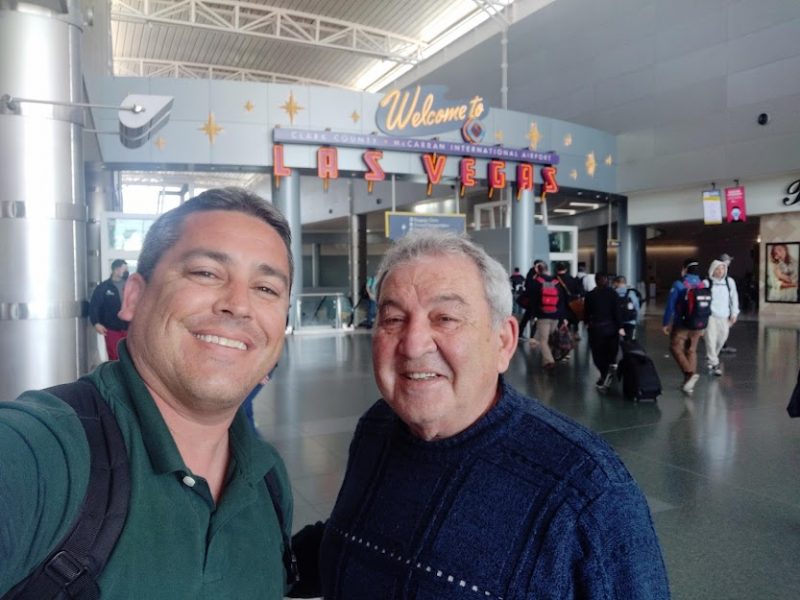 A Star-Studded Poker Trip of a Lifetime

Dad was also there to escort me to my first WSOP in 2016. Now, the roles were suddenly reversed; it was finally time for me to take Dad on a trip to Las Vegas.

As much as he loves playing the game, Dad’s a fan, too. He’s loved watching all those episodes of the WSOP and High Stakes Poker over the years. He’s also been my biggest cheerleader ever since I broke into the industry with Cardplayer Lifestyle. As I’ve chronicled my poker media journey over the last few years, I’ve basked in the glow of Dad’s pride. His positive feedback and unending encouragement always means the world to me. Now, I’d get to personally introduce him to poker’s superstars.

Dad taught me how to play poker when I was 8 years old. He loves playing and is a big fan, too!

He’s having a blast, getting to meet Poker Hall of Famers @phil_hellmuth, @FirstLadyPoker and @elielezra1 and a future one in @AriEngelPoker. 🏆 pic.twitter.com/7ya33OZr87

He gets mobbed every single time he’s playing poker on every single break, and without fail always says yes, with a smile, to every picture request and demand on his time.

On our special father-son trip, Daniel took a few minutes to make my Dad’s day.

I also got to introduce Dad to so many of the good friends I’ve made in the industry, players and media folks alike. Talk about worlds colliding; it’s so cool he’s met them and they’ve met him. It’s like everyone somehow knows me on a deeper level now that they know each other.

And BOY did we play a lot of poker! Dozens of hours of hold’em and mixed games, from Bally’s to Caesars to Resorts World to the Golden Nugget and back. Dad even got to play in his first ever poker tournament, the $160 Nightly $3K Guarantee at Resorts World (finishing in 9th place out of 21 players). 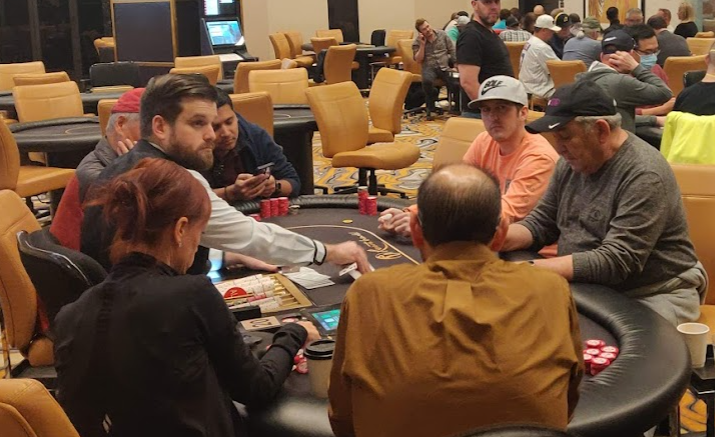 When we’re at home, Dad and I are both unfortunately relatively sedentary throughout the day, he in his office and me working from home. Not so in Las Vegas. Besides all the poker we played, we traversed the city, walking the Strip from Wynn and Encore to the Venetian to the Forum Shops at Caesars to the Mirage to Paris and back. The city quite simply energized us and recharged our depleted batteries.

We also dined at some of the great kosher restaurants in Summerlin, did our Target supply run (we don’t have those in Israel), hit up the Mob Museum, and even made it out to a spectacular scenic drive in Red Rock Canyon.

Fueling up with Dad before doing some poker celebrity sightseeing at the @WynnPoker Millions. 😃 pic.twitter.com/xUHyMRZJNJ

I wonder if someday there will be a @TheHendonMob museum in Vegas? ☺️ pic.twitter.com/S2yhkryqPa

Plus, walking up and down the Strip, having great food, and loving Red Rock Canyon.

There’ll Be Time Enough for Countin’, When the Dealin’s Done

And here I sit once again, back in my chair at home, reflecting on those seven magical days Dad and I had together. He and I probably spent more time together during that week than we had in the previous year.

Beyond everything I already mentioned, we also had a number of special, very personal moments together the gravity and magnitude of which are impossible to capture with mere words…

To be sure, my poker bankroll has seen better days. Prior to the trip, I was at an all-time high, but I unfortunately didn’t have even a single winning session. When you combine that with all the trip costs, I definitely took quite a hit.

But my parents taught me to appreciate experiences over things. Would I rather have a few  — OK, more than a few, 😂 — extra hundred dollar bills sitting in an envelope here at home, or have had the once-in-a-lifetime poker trip with my Dad to cherish forever?

Driving back towards the city from Red Rock Canyon, during an unexpected moment of silence, I began tearing up… kind of like I am again right now.

Dad noticed and lovingly scolded me about crying while we were on vacation.

And that’s what it’s all about folks.

Dad taught me how to play poker, but he also taught me so much more. And I’m grateful that as a 40-year-old, I still have my 73-year-old father to keep teaching me about life…

… and to play poker with. 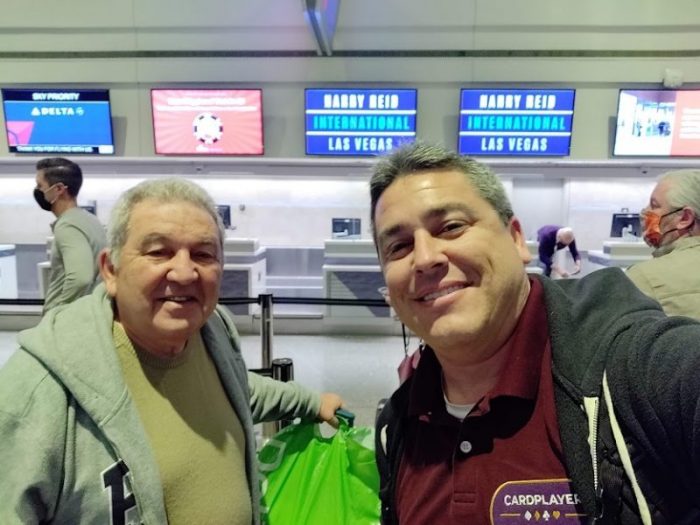