In Poker, Timing Is Everything

The first movie my wife (back then we were just dating) and I saw together was Sliding Doors. In a nutshell, the movie portrayed two separate tracks of what life looked like for someone based on whether or not she ended up making it in time for her train to depart the station. In other words, it played out a butterfly effect-type of scenario of how one specific event made (or didn’t make) a whole series of subsequent differences in that person’s life.

I was reminded of this last night, while driving from Los Angeles to Las Vegas. I had departed LA about 9pm, and was making incredible time, set to arrive in Las Vegas a scant four hours or so later. Approximately five miles from the California/Nevada state line, however, “an event” happened. All of a sudden, the line of cars heading eastbound came to a grinding halt. Some of us got out to see what was up; we could see police cars and a fire engine approximately a mile up ahead. Beyond that were the gleaming lights of Whiskey Pete’s.

The World Series of being stopped on I-15, 5 miles from the Nevada state line, for the last hour… due to an accident #runbad pic.twitter.com/fzdpelhXgB

Clearly, something had happened. I started to get annoyed; here I was, specifically not having stopped since the outset of my drive such that I could make it to where I’m staying in Vegas in time to get a good night’s sleep, and “fate had the nerve” to interfere with my plans.

We stood out there, in the middle of 98-degree desert heat, just waiting for things to clear up. It could be a few minutes, an hour, a few hours… nobody knew what to expect.

After trying my best to fill the time talking with people on the phone, finally about an hour later, traffic started moving again. I re-commenced my Vegas-bound drive. As the lights of Sin City appeared on the horizon, I decided that instead of heading to my home base, I’d head over to Aria for an hour of poker… I needed to blow off a little steam. 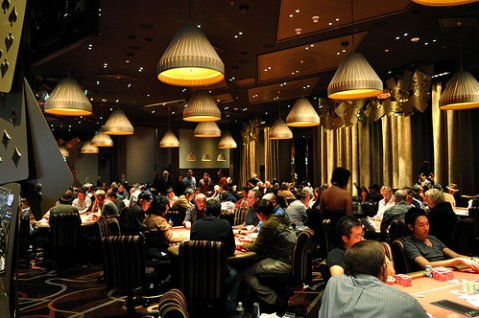 I left my car with the valet, letting him know I’d probably only be there for approximately an hour, and walked right into the poker room, about 300 feet away. I had never played at Aria before and was in search of a $1/2 NLHE table. I figured I’d just buy in for $100 and hope to either “double or nothing” within an hour, then head to sleep.

Check out how Aria Poker Room is innovating on social media!

The floorperson told me that they spread $1/3 (not $1/2) and they had an immediate seat open at three tables, I could pick whichever I wanted. I selected the table closest to me. Looking at the stacks at the table, I realized that I’d need to buy in for $200 to feel comfortable. I did so and was dealt my first hand.

Before I continue, let me just disclaim that I know that neither of my actions up to this point are standard. I’m no professional poker player. I was coming off five hours of driving. I can come up with every excuse in the book, but I had no real REASON for playing the hand the way I did.

The flop came down A87 rainbow. The big blind opened for $35. I took a look at him and knew I had him. I looked left, then decided to make it $80. The third player folded, and action moved back to the big blind who announced that he was all in (he had me covered by a few dollars). I insta-called.

The moment of truth.

He nervously asked if I had a set, and while I answered “no” I knew that I had him beat. I tabled my hand and he simultaneously showed his AQ offsuit. The board ran out clean and, just like that, I had doubled up.

He got up complaining about how badly he runs; I suppose I couldn’t blame him, given the circumstances. While stacking my chips, it occurred to me that in one hand I had “accomplished” even more than I had originally set out to do and could walk away with a tidy $215 profit for literally “no work at all”. I’ve never “hit and run” in my life, but given that I hadn’t really taken anyone else’s money at the table, I didn’t feel badly at all.

I politely excused myself, cashed in my chips, and returned to the valet before he had even had the chance to finish parking my car. I told him what had just happened, tipped him a couple bucks for listening to my story and laughing along with me, and drove home thinking about how, indeed, in poker, timing is everything.

Back in good old Vegas…. you can always count on it for a great story… and I’ve already got one after 1 hour here… stay tuned. ?

I am glad reading your article that you omitted some of the components when you told me about the hand you played. I’m glad you don’t usually play AK first in that way! Glad you made quick work of them but more importantly, glad you stuck to your plan and doubled up and went home to get some rest! Well done!

Thanks, Jan! Always good to have a legend in my corner rooting for me 🙂