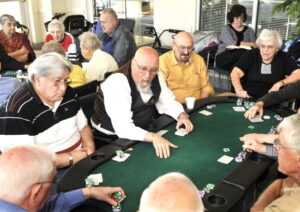 Poker has become a great passion for me over the 50 plus years I have been playing. Although it has been a turbulent sea of change, I’m a lifelong player. Always will be. But the fact is finding a good game isn’t what it used to be. When I was a younger man, it felt good, going from casino to casino, one club to another or one basement to another just to get in on a game. That lifestyle even sounds kind of glamorous to some now. But I wasn’t a professional gambler. That meant no matter how far I drove or how much I won, the next day I was getting up and going to work. It didn’t feel so bad back then. Like I said, I was younger.

By time I reached my forties, it didn’t wear me out mentally as it took its toll physically, mostly with time being too limited of a commodity to spread around. I was still loving the game. I’ll always love the game. Only now I had a wife, two daughters, a mortgage and other adult type responsibilities. Working my way to upper-level management put me in a position where I couldn’t pretend I wasn’t fatigued, well devastatingly tired, from being up all night psyching out opponents then driving home. It takes a lot out of you. Still, I was loving the game! I’ll always love the game. I wasn’t giving up until it got tired of me.

One afternoon in March I was home with the kids. My oldest daughter inadvertently introduced me to the prospect of playing poker at an online casino with real money that day. We had computers at the office but my responsibilities didn’t require I use one, so I left what I did not understand to it’s own. I was still reviewing manual blueprints and using old fashioned, low-tech resources to get my work done. Today I couldn’t imagine letting an hour pass without checking my mobile phone . Looking back it could have been an abacus and some chalk compared to what we can accomplish online. I can’t say whether that’s good or bad. It’s just the way things have turned over the years.

At this time I was spending less time looking for a game of poker and more time worrying about our financial situation and the family in general. Gas was expensive and my wife was a little anxious about me going out almost every night and being away for the bulk of the weekend. So my little one ends up showing me email and explaining why I needed it. She showed me how she used the computer to get homework assignments done without having to lug 200 lbs. to the library.

In time, I also learned how to browse the Internet, use a search engine, and play games like Solitaire, Spider Solitaire and Hearts on the computer. There was also this Napster thing if I was interested in listening to music…

One day I was sitting there playing Solitaire over and over and over, getting extremely frustrated at the fact that while I may have been losing more than I won, I still wasn’t feeling challenged. For reasons beyond that, and perhaps a miraculous intervention I can’t remember today, it eventually culminated with me to going into Explorer, or maybe was it Netscape, who knows. What I did next was the game changer. I typed two words: ‘play poker.’

The first time my wife saw me sitting there playing a hand, I don’t know if she was relieved or concerned. Probably a little of both. There was a time I may have been a little too easygoing about how my love for poker affected us, but those days were long gone. My family was the most important thing in the world and I was beyond letting the cards jeopardize that. My wife was also sweet enough to know that stopping cold turkey wasn’t in my blood. That would have been as risky as letting me run wild with the bank account, sadly.

Online gambling then wasn’t what it is now. Developers like Microgaming have created virtual casinos with a smorgasbord of player options. Baccarat, slots, blackjack, roulette and, of course, poker, are all available in formats that are as realistic as the experience gets. Online gambling is big business and the sites are competing as much as the ones in Las Vegas have been long before computers were around. They’re flashing big lights and offering incentives and welcome bonuses to get you into their lobby so they can claim you as a ‘member’. As a guy who has been to some of the biggest casinos in the world, let me tell you I’m impressed by what the Net has to offer.

When I first hit the keyboard though, there were only a few players out there. I believe that InterCasino may have been the first to accept actual cash to wager from the very start. Starnet was licensing Internet gaming systems in exchange for a share of licensee revenue. I bet that’s a lot of income. Microgaming soon after released the first progressive jackpot slot. Me? After a few conversations with the wife, I was getting my fix at places like Planet Poker, PokerStars and Party Poker.

I didn’t think I’d welcome the solitary aspect of playing from home if you would have asked me before. Instead, I appreciated it much more. The truth is, outside of friendly games, there isn’t a lot of camaraderie at the table. If anything, there’s usually enough tension to cut with a knife, especially at tournaments when a lot of money is at stake. I haven’t met many high stakes players that had a lot of love for a good conversation with other players while in the middle of a hand.

My game is Texas Hold ‘Em and I could find a game at my convenience. As the tech advanced and my gaming options opened up, it really grew on me. No getting in the car and burning gas, no waiting for a spot to open at the table, no concerns about safety when you’re walking around with large amounts of cash (sometimes in the seediest neighborhood), no getting dressed, no dark shades to hide my eyes, no smoke or sticky things that the previous visitors have left behind. I suppose the hippies could say, “Save a tree, gamble online.”

I can focus as little as I want without giving away my position. I can ‘multi-table,’ playing more than one hand at a time. (Unheard of in poker before the Internet). Even without having opponents in front of me, I could still see their tells. I can take poker notes, naked mind you. I can track passive players through screen names and searches. I don’t even have to hide my reveals!

I still have a lot of friends in the world of poker. Not like the old days where I’d walk into a casino in another country and shake a familiar hand and get a free drink. Today, I get out enough to play a few hands, or engage in a tournament, closer to home, but that’s it. The rest is all online. Once or twice a year I hit one of the big Vegas casinos and get the old-time rush. Memories…

After the hammer fell on Black Friday, the United States online poker apocalypse, the industry froze up. Only recently has online poker and casino gaming become legalized again in New Jersey, Nevada (online poker only), and Delaware. Thankfully I live in Delaware (I know the market is small, but hey – at least it’s legal!), but next time I visit Vegas I intend to give the new WSOP.com a shot.

Yet I can’t get enough of sitting down in my home office whenever I want to play a few hands or maybe try a few slot pulls. And I love the fact that I can stop when any of my grandkids show up for a surprise visit or when the world, meaning my wife and family need me.