The World Series of Poker has only just completed an 88-event live spectacular in Las Vegas as the famous poker festival brought the curtain down on a 17-year stay at the Rio Hotel & Casino in Las Vegas. As the dust settles on the news that the WSOP will be moving to Bally’s and Paris from May 2022, the World Series of Poker Europe has just kicked off in Rozvadov on the Czech/German border.

If you’re travelling from the United States (or elsewhere in the world) to Central Europe, how can you prepare and should your arrangements be tweaked due to any factors that are unlike those in Sin City? Let’s look at how you can put yourself in the best place to win big in the biggest cardroom in Europe. 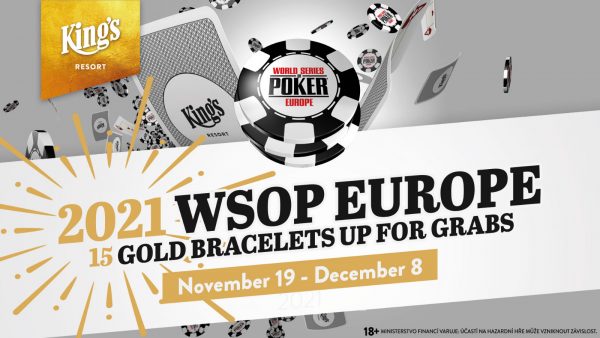 While Las Vegas is an open plan city with endless places to eat on your way to and from the Rio, Rozvadov is very much a ‘one stop shop’. If you’ve never been to Rozvadov before, you might be surprised to learn that everything you want isn’t just in walking distance but probably card-folding distance from the front door.

Convenient to travel to, Rozvadov and King’s Casino is absolutely set up for poker, so there are way fewer distractions to your planning. As with Las Vegas, getting into any kind of routine can only benefit you, so if you have researched the start times of each event within your schedule, then you’ll know exactly when you have to turn up. It’s highly unlikely that you’ll be far from your seat.

The flip side of Rozvadov being the polar opposite of Las Vegas is that your entertainment options are much more limited. It’s not that there are a few less nightclub and only three dozen restaurants rather than a hundred. There are very few options at all. If you’re more of a two-tournaments-and-club kind of player who lives for parties and the nightlife, then the Czech/German town is probably not for you.

With the WSOPE taking place between November 19 and December 8, there are 15 WSOPE bracelet events, with over €11 million in guaranteed prize pools. Rozvadov is situated between Prague and Munich, so for Central European players based in Austria or the Czech Republic — a growing number of players — there is an ease of travel and a convenience to the area that is second to none. Just don’t expect any kind of night out like a tour of the Strip if you bust early.

One of the biggest issues players from other geographic locations often mention is the ability — or lack thereof — obtaining euros. Changing currencies is a problem any traveling poker player knows about and being prepared is crucial. Checking out how many events you’re going to be playing on the schedule is crucial.

Many players from Europe will have euros available for dollars or online currency if you are a prolific poker player, so if you have currencies outside of cash, then there may be a way of swapping in your currency and obtaining the currency accepted by King’s Casino without jumping through quite as many hoops as before.

You can now buy in and get paid out using your Luxon Pay #eWallet. Please visit the King’s Resort cash desk or contact our 24/7 Customer Service team for further details💸 pic.twitter.com/JVICxqIzJg

There’s no getting around it: attending any live poker event these days starts with a check of the necessary arrangements you must make around COVID-19. Fully vaccinated players are permitted to attend WSOP events, with these players needing to have been vaccinated a minimum of 14 days before attending the WSOPE. The acceptable vaccines are Moderna, Novavax, Pfizer, Sanofi-GSK, AstraZeneca and CureVac and upon attending King’s, you must show proof of taking two shots via your EU Digital COVID Certificate. If you have taken the Johnson & Johnson/Janssen Pharmaceuticals, then only one shot is taken, and thereby needs to be proved as such.

If you have contracted COVID-19 but recovered in the 180 days prior to your arrival — of particular interest to several U.S. players whose end of WSOP plans were altered after they tested positive near the end of the WSOP in Vegas — then you also need to prove it. Unvaccinated players have to show a PCR test that was taken less than three days before you arrive at the WSOPE. You can also show proof of a negative ‘anti-gen’ test that must be taken less than 24 hours before you arrive at the WSOPE.

We ensure and check that every single guest is either vaccinated, tested negative or recovered from covid-19 (with a recovery certificate and recovered within the past 180 days). There is no entry for anyone without fulfilling one of the three options.

5. No Player of the Year

The WSOP Player of the Year race has been gathering pace over in Las Vegas, but if you’re railing the last couple of events at the Rio in the mistaken belief that those top of the leaderboard challengers will be hot-footing it to the Czech Republic, then you need to be put right.

The 2021 WSOP Player of the Year race is restricted to the U.S.-based WSOP. Up to and including the final 88th live event, players can only gain points towards the eventual Player of the Year title in events held in Las Vegas, and the competition is almost over. This is due to the restrictions it would put on some players who are unable to travel for health reasons. As it stands, there are no plans to have a separate POY race in Rozvadov, which seems a shame, but may change in future years.