This recap will mostly center on Daniel Negreanu and how ridiculously badly he runs on High Stakes Poker. Aside for some funny jokes and commentary by Gabe Kaplan, there simply isn’t too much good poker action this episode that didn’t involve Negreanu.

Kid Poker seems to have changed up his poker strategy a bit and is playing a bit more aggressive than usual. While sometimes this works for him, other times it doesn’t. Interestingly, I note that, almost every time, Daniel bets the flop and checks the turn… That’s a kind of play most people pounce on… his facial expressions don’t imply he’s trying to check raise either… he’s really playing poorly in my opinion. Where’s the Daniel Negreanu I remember?! 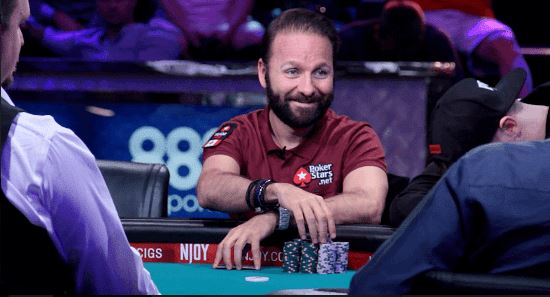 Mike “The Mouth” Matusow slowplays KK preflop and it turns golden for him.

Eli Elezra raised to $5k preflop and Daniel Negreanu comes along as well with 9-8 of clubs. A flop of 9-K-9 is PERFECT for the Mouth, and if you’ve ever seen any High Stakes Poker, you know Negreanu’s in deep trouble. By the looks of things, it appeared Negreanu was focusing mainly on his own flopped trip 9s and hoping that Matusow just had top pair. Mike’s excellent slowplay paid off big dividends for $330K. What kills me is Daniel’s fatal flaw emerging yet again: Based on facial reaction, Negreanu seems to suspect he might be beat ALREADY when Mike raised $40k on the turn, but he clearly RELUCTANTLY! said all-in… Listen to his voice and it sounds like he knows he’s beat… Anyhow, Daniel’s now officially down $500,000 this season… So far…

After Negreanu makes a little money back (from ElkY), he looks down at 10-10 and locks up with Matusow again, who holds A-Q suited clubs this time around. I found it interesting that Negreanu checked dark after calling the Mouth’s raise to $45K. This not only gave Matusow the advantage to act first, but also indicates that Negreanu wasn’t VERY strong. Mike hit the flop well – even without a made hand, according to the poker statistics, he’s ahead of Negreanu’s overpair to the flop. Mike takes advantage perfectly and forces Daniel to be the one to make the tough decision. Even though it could be said that Negreanu made a good tough call, he agrees, clearly already thinking the worst will happen, to run it twice.

The war of words between the two poker pros as the rest of the hand plays out is nothing less than television gold: “always good to win the first one”. Daniel got unlucky on the river both times. But what’s another few hundred thousand dollars to someone who’s won millions at the felt? Some compensation…

Anyhow, despite his horrible luck, Negreanu rebuys again for another $200K… not something I would do if I was running that badly and so verbally lacking confidence and saying how badly I’d been running. We’ll see what misfortunes await Kid Poker in the next episode…