As our pre-event column predicted, this year’s NBC Heads Up National Poker Championship sure was entertaining! While the event won’t be aired for a little while (mark your calendars for Sunday, April 18th people!), the final tournament bracket indicates that there were plenty of awesome matchups and some surprising winners over the course of the matches played.

If you have a look at the final bracket below, you’ll see that there were a good few upsets that casual poker fans and TV viewers might not have expected. Even if someone was easily outplayed, that didn’t necessarily mean they wouldn’t advanced, as poker’s “luck factor” always plays a part no matter how good you are at the gane. 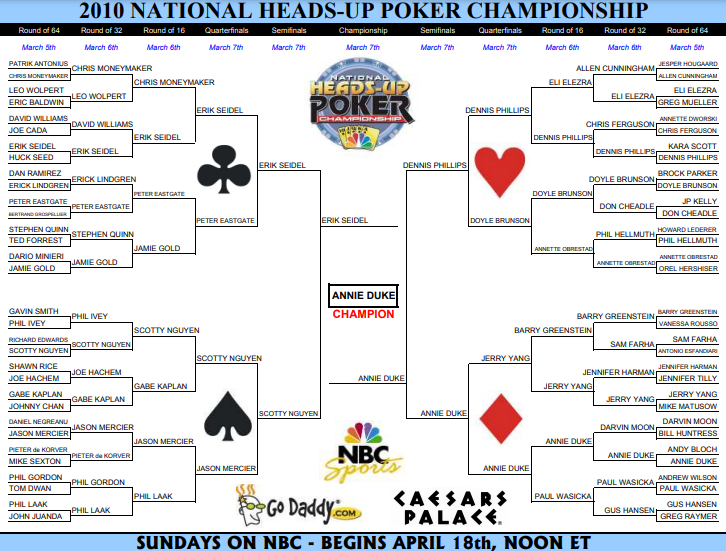 Perhaps the biggest surprise was November Niner Dennis Phillips advancing to the Final Four of the 64-player bracket. To be sure, he’s a known name, but Phillips is no professional poker player. Kudos to him, though, as he outperformed many far more decorated poker professionals.

The winner of the prestigious event was Annie Duke. It could be argued that the win “revives” her poker career. While she’s been a “name” player for a while already, the woman formerly best known as Howard “The Professor” Lederer’s sister hasn’t posted any memorable results as of late.

The event is unique in its format, as well as (to borrow an old NBC slogan) “Must See TV”. What makes the Heads Up Championship a major event each year is not just the $500,000 payday it awards to the winner, but, more importantly, a national TV audience eager to learn some household names.

In this writer’s humble opinion, however, on the poker playing level, I’d say that luck plays a much larger role than skill in this particular format than in a traditional poker tournament (not to mention a cash game). In poker, any player can win a hand against any other player on any given day. With a random draw dictating the opponents you’d face, even the top players might find themselves facing other players who they simply can’t get a good read on. Alternatively, the chips might fall in such a way that someone like Phil Ivey might just be able to mow down a bunch of online qualifiers on his way to the final match.

The 64-person bracket consisted of a who’s who of the poker world. Hall of Famers, legends, cash game beasts, tournament grinders — it had it all. While Duke’s emergence from the field certainly set her apart, that doesn’t necessarily indicate she’s “the best” of them all. After all, cards can be fickle and players keep on improving, as they take advantage of the material offered at some of the best poker training sites.

Despite the major luck factor, thus far at least, big “name” players have prevailed for six straight years in this exclusive tournament. In any event, congratulations to Annie Duke – who just guaranteed her name and face will stand out for another few years to come. 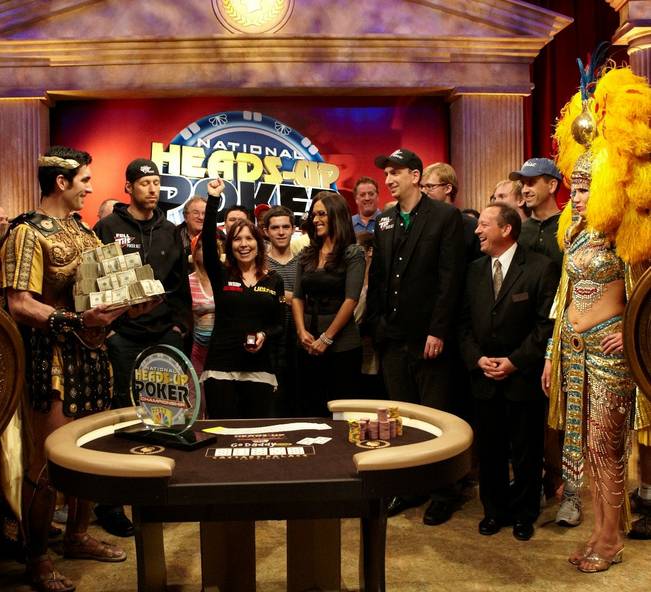