A Brad Owen Meet-Up Game, with Some WPT Flair

Like hundreds of thousands other people out there, I’ve been a fan of Brad Owen’s for while now. The man behind poker’s most popular YouTube vlog has made his way to industry prominence over the last few years through his incredibly engaging and humorous video content, all while remaining true to his authentic, humble self. It’s these wholesome, endearing qualities that make him so relatable, and a perfect fit for his new role as World Poker Tour ambassador. 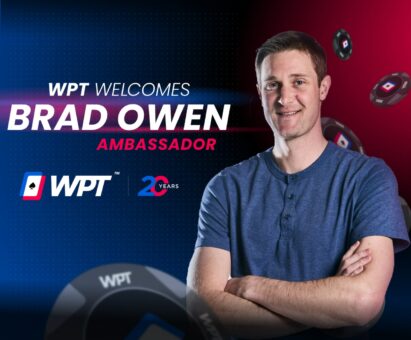 While the Main Event of the 2022 World Poker Tour Choctaw stop begins today, the festivities could be said to have kicked off yesterday with Brad’s meet-up game (MUG). Brad, along with Andrew Neeme, has hosted dozens of meet-up games over the last few years, where he has the opportunity to directly engage and play poker with his fans. Said poker sessions are often followed up by a postgame hangout at a nearby bar, during which lots of fun stories are exchanged, and lots of spirits are imbibed.

I arrived on the scene yesterday at the tail end of the meet-up game, in time to catch Brad playing at his ninth and tenth tables of the day. I had never attended a MUG in person, and it was pretty cool to see the open seat 5 at each table, reserved for his arrival. Plainly put, the man is a genuine poker rock star.

It was very impressive watching him balance so many things simultaneously: playing in competitive cash games, bantering with the other players at each table, agreeing to every autograph and selfie request (I counted a little over half a dozen in the 45 minutes or so that I was watching from the sidelines), and also filming for what will likely be another future vlog episode. All told, the meet up game lasted an extra 90 minutes beyond the planned five hours it was advertised for, with close to a dozen $2/5 cash game tables running throughout.

Many of us who’ve been around in poker media for a while have openly wondered what sort of magic sauce this industry needs to attract the next generation of players born after the “Moneymaker era.” While watching the poker action from a distance, I had the opportunity to speak with Shane, a dealer here in the permanent Choctaw casino poker room. Just 22 years old, Shane has been working here since late last year and said that he was a massive fan of Brad’s vlogs.

Shane was off-duty yesterday, but he specifically showed up in order to meet Brad and get his autograph. As an employee, he is not permitted to play poker on property, but that did not deter him from hanging around and waiting for Brad to free up for a couple moments. Shane got even more than he had hoped for, getting to sit and shoot the breeze with Brad for a good 15 minutes while sharing an alcoholic beverage. Shane also told me quite a bit about the poker room, which I hope to share with you in a future article.

I also had the chance to speak with Jose (pictured above). A beaming countenance among the numerous happy faces in the crowd, Jose told me at length about how he came to be in attendance at this MUG. “My daughter is about to graduate high school and we’ve just got so much going on at home over these couple of weeks. I live about two hours away but when I saw that the meet-up game was happening right here at Choctaw I asked my wife it was OK for me to drive out, even though things are crazy busy for us. She said yes, and I’ve been here for two days. I’m driving home right after this, but I just really wanted to meet Brad and play some poker with him after watching so many of his videos.”

Jose continued, “When I got here there were already 67 players on the list and I was nervous that I wouldn’t get the opportunity to play with Brad, but I did and it was awesome! I’m down $100 for the trip but had a fantastic time.”

So what about that WPT flair that I mentioned in the title? It was most certainly there! As Brad pivoted from one table to the next and posed for one fan photo after another, a World Poker Tour videographer, Lizzie, was on hand capturing it all. I’m sure we can expect to see a brilliantly produced video recap highlight reel in the near future.

If there’s one thing the World Poker Tour knows how to do exceptionally well (note: they do a LOT of things exceptionally well 😃), it’s put on a show. Beyond the open bar, MUG attendees were treated to a full buffet lunch/dinner in The League Sports Bar area, with a vast array of delectable options to choose from. It’s often said that the way to people’s hearts go through their stomachs; so let me tell you: the WPT and Brad Owen sure touched a lot of hearts yesterday.

Brad’s got a smile that could launch 1,000 chips, and it remained firmly plastered across his face as he told me before we parted ways that he was “down $650” on the day. And it wasn’t just the “2 or 3” beers talking either; here was a man genuinely just as happy to be there as the hordes of poker-playing vlog fans who came out to see him in person.

To think that this is just the beginning of Brad’s ambassadorship for one of the leading poker industry brands brings a smile to my face, too. Good things are happening with the WPT, and – as the company president Adam Pliska loves to say – the best is yet to come.