With the online poker legislative landscape deadlocked in the United States while unregulated sites continue to make their services available to US citizens unabated, many poker players are turning to Virtual Private Networks (VPNs) to compete in real money games. By connecting to a VPN, you can hide your real life location and make it appear as if you are logging on to real money online gambling sites from a different region; one where online poker is properly legalized and regulated. 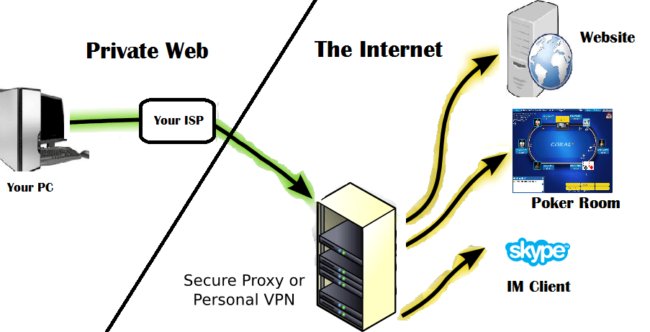 While here at Cardplayer Lifestyle we support efforts to legalize and regulate online poker throughout the United States (as well as other jurisdictions where it’s currently outlawed), we’re aware that many online poker enthusiasts living in jurisdictions where it’s not allowed cannot resist the temptation to play. All we can really do, then, is encourage you to keep your wits about you and take proper precautions.

*Important Editor’s Note: Please note that if you DO choose to use a VPN to play online poker from a jurisdiction in which it’s illegal to do so, you risk losing all of your funds.

With that said, using a VPN also helps protect real money wagerers from persistent hackers who are constantly on the prowl on their quest to obtain data illegally. Thus, even people playing online poker from a jurisdiction where such activity is already legalized and regulated might consider availing themselves of such a service. It goes without saying that we’re in favor of maintaining the most secure possible environment in which to play poker online.

Other articles often cite the same list of the best VPNs in 2017 to use to play online poker, but we’ve got another four solid options worth considering.

VPN Area is a top-rated Virtual Private Network that also touts a high speed Internet connection by sending your information through a private server, which in many cases will greatly enhance your Internet speed.

The monthly flat rate for VPN Area is $9.90; however, you can obtain this service for as little as $4.92 per month by opting for the $59 yearly fee.

VPN Area has servers in 69 countries, offers AES-256 encryption, and allows you to connect from up to six devices with unlimited bandwidth.

Boleh VPN offers military grade 256 bit AES encryption that protects your network from unwanted intrusion. The VPN promotes that fact that it operates in a country that is not obligated to comply with FVEY (Five Eyes) guidelines. Your data and location are protected while connected to Boleh VPN.

Boleh VPN offers new customers a $9.99 monthly rate or, if you’re just looking to try it out for a short while, a 7-day trail package for $3.70. They also offer a money-saving yearly service, which comes at a price of $79.99.

Allow yourself to “breathe the real Internet” by using Air VPN. This service makes it possible for customers to block everyone from criminals to governments from accessing your information.

Air VPN has short-term options for as little as €1 (three days) or you can gain monthly access for €7. A yearly subscription costs €54. You can also choose to pay for the service using Bitcoin.

This is a great option for customers who wish to play online poker from countries within the European Union since it offers its products in the regional fiat currency. Just like most of its competitors, Air VPN offers state-of-the-art encryption.

VPN AC is a Virtual Private Network service that its website claims is “secure, fast and reliable.” Available in over 20 countries, this VPN comes with a yearly price tag of $58, which works out to $4.80 per month. Customers who instead opt for the monthly service can do so for $9; there are also other packages available.

You can use up to six devices to connect to VPN AC while taking advantage of the website’s various tutorials on how to set up and customize your private connection.