Industry legends Vince Van Patten and Isai Scheinberg were recognized Monday for their respective contributions to the poker world, as each pioneer was announced to be a recipient of the 2022 WPT Honors in a tribute ceremony held at the Wynn Las Vegas.

“It is my privilege to share that this year’s WPT Honors Awards recipients will be Vince Van Patten and Isai Scheinberg,” said World Poker Tour CEO Adam Pliska to a captive full Encore Ballroom as Day 1A of the WPT World Championship Main Event was briefly paused for the announcement.

“These two men have both made transformational contributions to the poker community. Isai as a pioneer with his incredible ingenuity and boldness, and Vince with his love and dedication to expanding the game of poker. Both honorees are truly deserving of the award.” 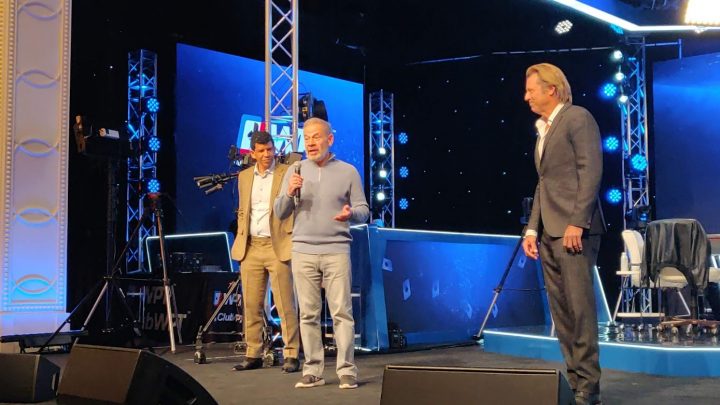 Native New Yorker Vince Van Patten teamed up with the World Poker Tour in 2003, and has represented the brand ever since through his unique presentation of poker content and high profile tournaments in the broadcast booth.

Originally introduced to the game of poker by his father, Dick Van Patten, Vince has been around the game since he was a teenager – even managing a Hollywood home game in the 1990s.

Van Patten expressed gratitude towards the WPT family and executive team upon receiving the WPT Honors nod saying “I am so fortunate to have been a part of this amazing company for 20 years and I have never been more proud of what the WPT has become, than here at the first-ever WPT World Championship at the Wynn. It is an incredible site.”

Through his leadership, aptitude, and love for the game, Scheinberg would go on to vault the online poker business into a worldwide phenomenon during the early to mid-2000s.

The PokerStars online poker business, and subsequently their live events series, became a logical next step for both casual and serious card playing fans around the world who had – up until the early 2000s – dreamed of the online, real money potential of card games after cutting their teeth on the popular offline, click-and-drag Microsoft Solitaire game over the prior decade.

By the time Scheinberg sold the company in 2014 for $4.9 billion, PokerStars had amassed a player base that exceeded 100 million individuals across the globe.

The PokerStars co-founder was on hand to receive the WPT Honors recognition and spoke to the assembled crowd of players and poker media outlets, most of whom had never seen his face or heard his distinct voice before. He fondly recalled that “the first TV advertising PokerStars did was on WPT programming on the Travel Channel. It had a major impact that led to millions of players joining us.”

This year marked the fourth time the World Poker Tour has recognized the ground-breaking achievements of poker players, personalities, and industry executives.

In 2017, Bruno Fitoussi, Linda Johnson, and Mike Sexton became the inaugural recipients of the WPT Honors. The following year, the WPT paid homage to its founders: Lyle Berman and Steve Lipscomb, while industry trailblazer Deb Giardina and tournament director Matt Savage were exalted in 2019 for their leadership in live, on-site poker operations.

Savage hinted that the eventual WPT World Championship at Wynn Las Vegas prize pool could turn out to be “over $20 million”, and based on the impressive Day 1A turnout of 615 players that milestone is well within reach.

Late registration for ‘Day 1C’ of the $10,400 buy-in WPT World Championship 2022 Main Event will be open up to the start of Level 7 on Wednesday, with a $1,100 Milestone Satellite qualifier available for players inside the Wynn Las Vegas Poker Room on December 14th, starting at 12:00 Noon local time.

The WPT World Championship Main Event – ‘Day 1B’ of which is today – is a “freezeout” poker tournament in which multiple re-entries (aside from a single entry per starting flight) are not allowed.

This means that once the late registration period ends for ‘Day 1C’ on Wednesday (following the completion of Level 6) all remaining participants will be locked in to their current chip counts for the remainder of the showcase event.