The cabbie looked out the passenger side window then looked back at me in his rear-view mirror. 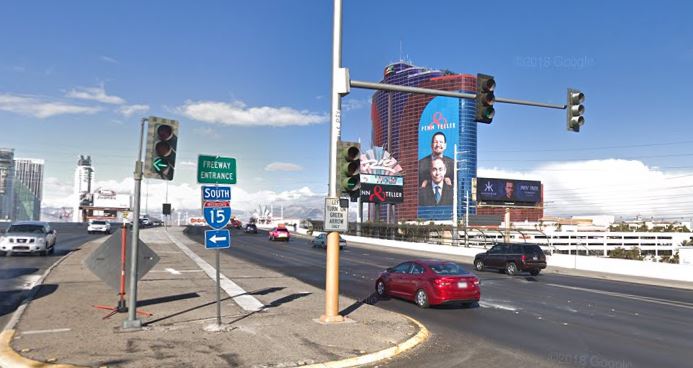 So, how was your first experience playing the WSOP?

I’d always known there’d be some stress and fear associated with it, but the scariest things I could imagine would be facing a big raise for my tournament life, or maybe being 3-bet repeatedly by a pro while I was out of position. Something related to the actual game, not voluntarily putting my life into the hands of a Las Vegas cab driver, giving him the OK to… well, we’ll get there.

In 2009, for the 40th anniversary of the WSOP, they dropped the buy-in of their smallest tournament to $1,000 for the first time. Before the Colossus, the Giant and the Big 50, this was their first attempt at a more recreational friendly price point, and it worked. A massive field was promised, and this recreational player was off to Vegas to be a part of it.

In previous trips to Vegas I’d wandered the halls of the Rio, rubbing shoulders and shaking hands with some of the stars of the poker world. But the closest I’d come to playing an event was a failed attempt at a $150 satellite in 2004, back in the last days of Binion’s as its home.

In 2009 though, the combo of a $1k price point and the 40th anniversary — well that was a clincher. I was a home game hero, an online punter, and a marginal $1-2 NLHE winner, but I’d never really had the bankroll to justify firing a WSOP event, so finally I was going to take a shot… and I couldn’t wait!

READ: How to Compete at the WSOP with a Four-Figure Bankroll

I landed at McCarran International with an anticipation like I’d never had before. Sure, I’d played poker every time I’d been to Vegas previously, but this was different. The mystique and energy of playing your first WSOP event is real, and that begins well before you even set foot in the Rio.

I checked into the Hooters Hotel and Casino (yup, really… and it’s as orange and cheesy as you’d imagine, but hey, it was cheap) the afternoon before the tournament and settled in to have the least Vegas-y first night ever. I studied, watched a movie, ordered a nice salmon and vegetable dinner from room service… OF COURSE NOT! I had friggin’ wings! Then I went to bed early. There was work to be done the next day.

Despite the anticipation raging through my body I actually managed to have a decent sleep and woke up feeling great. Time to start the day with a run on the Strip, grab a smoothie, and then get ready for the big day.

I put on my gym gear, tucked my ID and a few bucks into the Velcro pocket, and embarked onto Tropicana avenue to begin my run. (By the way, if you’ve never experienced a break of day run on the Vegas Strip, I highly recommend it. The combination of comfortable running weather and post-club people watching is phenomenal!)

Following a run to the Wynn and back, I returned feeling energized, strong, and ready to battle. I showered, dressed, loaded up my backpack and headed back downstairs to hail a taxi.

The butterflies kicked in as soon as I saw the Rio in the distance. Here we go! 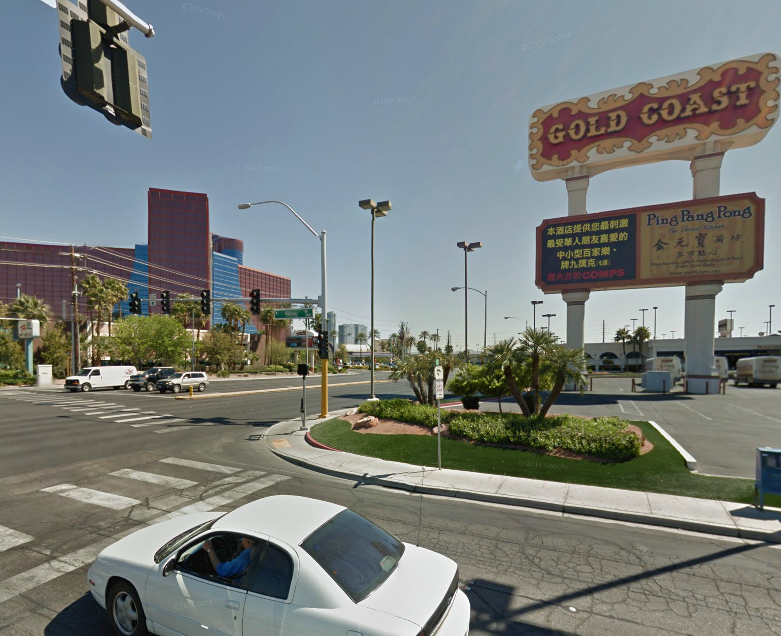 The Rio (left) looming in the distance

The cab pulled up to the back entrance of the Rio convention center with about 20 minutes until cards were in the air. I’d allotted plenty of time to have a few moments to enjoy the anticipation, then try to fight off some of those butterflies before I sat down at my table. As soon as I walked into the building and smelled those Rio hallways, there were even more to fight. Among the buzz of thousands of poker players I found a semi quiet corner, chilled for a few minutes, and then headed toward the Brasilia room.

As I entered the room and was serenaded by ‘Ecstasy of Gold’ for the first time, the butterflies erupted again, and a massive wave of nervous, giddy energy just plowed me. It was awesome.

I sat down, opened my backpack, took the entry slip from my wallet and presented it to the dealer. He pushed my 3,000 in tournament chips forward.

Oh of course, they need my ID, duh. I reached back into my backpack to grab my wallet again and give him my driver’s licence.

It. Wasn’t. Fucking. There.

The butterflies dropped to the pit of my stomach like a blast of pesticide had just been pumped into my gut. They were dead, and I felt sick.

The dealer called a floorman over, and he provided the gory details. My chips would be in play, but I couldn’t play them until I could present ID.

As this was being explained to me, the dulcet tones of Jack Effel came over the loudspeaker announcing that the blinds were 25/25 with 30-minute levels. Shuffle up and deal!

And blind off if you’re a dummy who forgot his ID.

Ecstasy of Gold was replaced in my head by the William Tell Overture as I raced out of the room toward the back entrance and the taxi stand. (Fun fact: at this moment, no one in history ever has, or ever will have, as desperate a desire to get to a Hooters as I did.)

I jumped into the back seat of the first taxi I saw, closed the door and frantically told the driver about my dwindling chip stack and that I needed to get to my beautiful orange hotel as fast as possible.

He looked back at me and with a mischievous, zealous smile proclaimed, “well alright then!”

*Disclaimer: The following actions of both myself and the cab driver I do not necessarily condone. However, at the time, knowing that in 30 minutes I’d be down to a sub 60 BB stack and in an hour under 30, hey man, desperate times!

The cab bolted from the curb onto the windy two-lane exit road from the back of the Rio, but before we could even get close to the Flamingo road exit, a lengthy line of cars in front of us halted our progress.

One lane in, one lane out and not much else. The Lone Ranger music screeched to a halt, until…

The cabbie looked out the passenger side window then looked back at me in his rearview mirror.

Weaving between the stopped cars on his left and the pedestrians jumping out of the way, we squeezed our way toward the main entrance where fortune smiled on us and we actually caught a green light, and from the right turn lane cut everyone off and hung a left toward the freeway!

Across Flamingo and onto the I-15 we raced. The driver hammering the accelerator as we flew toward the Tropicana exit, topping 100 mph before we slowed to pull off. More Fast and Furious-style rungood as we caught the light and turned onto Tropicana, tires squealing. Toward the Strip we went, but a cluster of cars across the five eastbound lanes between New York-New York and Excalibur awaited us.

He swerved into an open far right lane which turned south onto the Strip toward Mandalay Bay. I thought he was either turning toward some back entrance I didn’t know about or was going to just fly right through a red light into 10+ lanes of Las Vegas Blvd. traffic. Oh, dear god.

But no. By some other-worldly Las Vegas cab driver voodoo, without stopping, he knew the light was changing. Red became green and he then swerved back in front of the eastbound traffic as we continued across Tropicana. Frank Bullitt had nothing on this guy!

Back at the hotel in record time, I speed walked through the casino (despite my hurry, I’ve heard running through a casino is frowned upon), sprinted down the hallway to my room, practically kicked the door open and ripped my driver’s licence from my gym shorts. Then it was back downstairs, jump back into the cab and round two of our journey.

If I’d run as well in the tournament as I did in this Hollywood blockbuster of a cab ride, I’d be rocking a bracelet right now. Following a string of glorious green lights, another drag race up the freeway and another tire squealing screech upon arrival back at the Rio, we’d somehow completed this journey in under 20 minutes!

I paid the driver, tipped him an extra $20, ran back into the Rio, burst open the doors to the Brasilia room and returned triumphantly to my seat. I exhaled and showed the dealer my ID as he greeted me with a snicker and a friendly “welcome back, sir”.

As I tried to catch my breath while the rest of the table looked at me with varying levels of hilarity, I cut out my chips and counted. My original 3,000 was now… 2,950.

As for the tournament (oh yeah, that), the excitement of my first WSOP event was a little different than that of my life flashing before my eyes as I flew through the streets of Las Vegas, but once my heart rate returned to normal poker playing levels, it was damn cool.

I got to play with several recognizable players, including Brandon Adams at that opening table, Vanessa Rousso, Barry Shulman, and eventual winner Steve Sung.

I survived Day 1 with a decent stack of 25,000 after tripling up with pocket aces on the final hand of the day, earning myself a bag and a real chance to make the money the next day.

Between the thrill of making Day 2 and thoughts of my little car ride, I didn’t sleep nearly as well that night. But before my futile attempt at it, I made damn sure all my necessary paperwork and ID for Day 2 was in that backpack.

I returned to the Rio the following day weary from lack of sleep, with adrenaline carrying me through the early levels where I probably played way too tight. But I wanted a profile on WSOP.com and my first result on the Hendon Mob. If I could run it up after that, cool. For my bankroll, a min cash was way better than no cash.

After about four hours of play with my stack dwindling to under 10 BB, the bubble burst and the final 620 players from a starting field of 6,012 entrants were in the money. Mission accomplished! 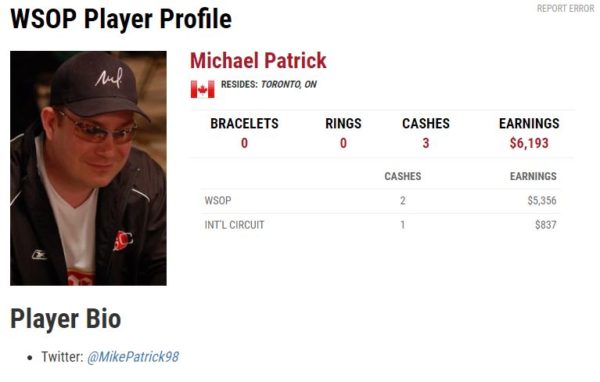 The look of a man who just an hour before this photo was taken was encouraging potential vehicular homicide. | Image credit: WSOP.com

From there I managed to double up and ladder past a min cash, but soon after I got AJ in pre-flop against KQ for my last 15 BB and couldn’t hold. I finished in 507th place for a little over $2,000, along with a new appreciation for Las Vegas cab drivers, and a helluva story. I wished my table mates good luck then headed back into the Rio hallways and to the cash cage to collect my winnings.

After tucking the money into my backpack I walked out to the taxi stand, where a cab was waiting. I hopped into the backseat and was greeted with a smile from an older lady behind the wheel.

“Just back to my hotel. I’m at Hooters. Take your time.”