What the Flop? | Where’s MY Panties?

I’ve gotten into the habit, whenever I go play poker at the Commerce Casino, of writing little notes to myself about the random/fun/straight-up weird stuff that can happen during my day there. For example:

These are notes just for me or to share with one of my family members who’s a poker player, as they’re the only ones who can truly understand what I’m saying. Otherwise, it just sounds like I’m spending my day thinking about the new casinos 2020 will have to offer, or at a weird carnival, on purpose, and sometimes paying money for the random privilege of seeing things like a dim sum/burrito hybrid cart that has a woman saying in a monotonous tone for an hour-“Dim sum, burrito”, until you can’t not hear the refrain and wonder if in fact, I do want a burrito. (There’s always a part of me that could have a burrito for dinner, however, I’m not OK eating a burrito while at the table. I’m trying to draw LESS attention to myself, not more.)

What Kind of Poker Notes Do YOU Take?

I wrote the note above when a player came back to the table after being gone for around 30 minutes. It felt like a long time, but poker time varies – it either flies by or it seems as if mountains can form in the amount of time it takes someone to make a decision or for the next hand to be played. Upon the player’s return, the dealer said at a group level how happy he was that he could smell this player before his shift was over. Being me, I said it depended on what he was smoking, and it was verified that it was “green”.

I never know what my notes are going to say, or even remember them until I read them later on. The cards always come first and sometimes blot other details out of my brain.

Sometimes they’re non sequiturs, like the fact that someone tried to raise themselves in a pot, or that I’m still seeing proof that mullets are alive and well.

However, a few weeks back, I was getting a diet soda for the road at the Commerce Casino gift shop, as I needed some energetic help getting back home while driving on the craptastic road that is the Interstate 5 freeway, and I saw something I’ve never seen while playing poker. I was in line to buy my drink, and a tall man came in and asked the clerk about to ring up my purchase if they had a belt. The clerk, without taking a beat, pointed to the wall. The man walked over tried on one and said “perfect, I’ll take it”. I laughed after he left and said to the clerk, “that’s random, right?” He laughed as well and agreed.

I wondered after I left, what other random items did this gift store have? Mind you, this was a gift store at a CARD club, not a big Vegas hotel gift store. The next time I came in to play cards, I checked out the area with the belts, and in a small square area there were two types of boxer briefs for men, three types of men’s socks, wet wipes, a lint roller and a strawberry air freshener. The combination gave me some…interesting scenarios in my brain, but made me wonder: where’s MY panties? 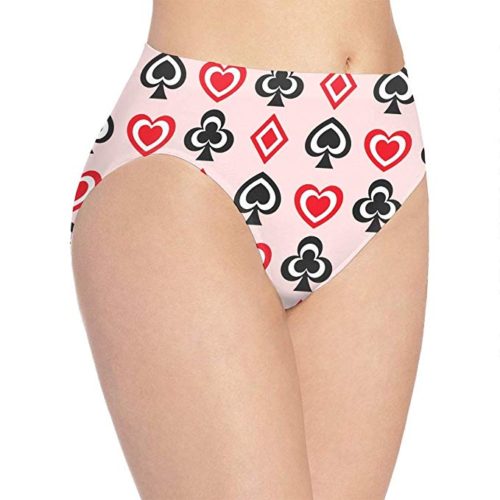 What if I’m on a heater and I desperately need my own extra pair of panties? I mean, the odds of that happening are less than the odds of being dealt a royal flush, but still! They had boxer briefs, but no women’s underwear that I could see in this close-to-the-counter hot zone. All the other items could be used potentially as unisex, and if women’s panties are offensive or incendiary, what about women’s underwear that comes in a tube, usually from a Walmart or a Target?

Women normally carry more gear than the average bear – I myself have an extra tank top, 4 jackets, and more Kleenex than a human being should have in my car, among other items. Also, could the men exchange the comps earned on their players’ cards for this underwear? I want in! Most of me is kidding, and the majority of women would take a hard pass on buying underwear from a poker room gift store. However, I need to do more research into what more is in that gift store. I could call, but what’s the fun in that?

This is part of what I love about poker, I HAVE stories to tell, ones that crack me up, keep me engaged during the moments when I’m so bored at the poker table I wonder why I’m playing at all. I’m not going to see any of this in any other segment of my life, and in between our big moments, moments like these make me glad I’m alive and think this is funny, that this is the sensibility I take with me when I play cards.

What’s the weirdest thing (not disgusting or sexual) you’ve seen in a poker gift shop?