Professional poker is a serious business. Getting to an almost Zen-like state of mind that allows you to know when to hold’em and when to fold’em takes concentration, discipline and stoicism. However, even in the heat of battle, when bets, bluffs and chips are raining down, there’s always room for a joke or two. In fact, over the years, poker has produced some comic moments that will forever raise a smile among those who take a seat at the felt. 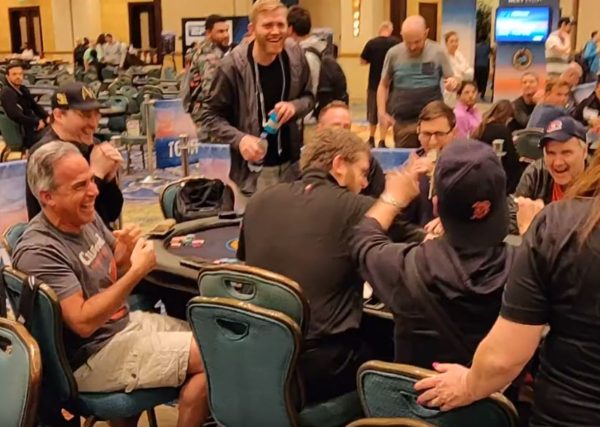 Cliff Josephy, Phil Hellmuth, Norm Macdonald, and others have a laugh at the poker table

Of course, there has always been a subculture of comedy in poker. Texas road gamblers were known to spin a yarn or two and the poker table was the perfect place to hold court. Whether it was a tall tale, a hand that went awry or a quick joke, players have also found time for fun. In fact, comedy can actually be a useful way to disarm your opponents and put them at ease before you launch an attack. If you go to this site covering some of the (cheesiest) poker jokes, you’ll pick up a quip or two.

Of course, you might need more than a one-liner such as “why is gambling banned in Africa? Too many cheetahs”, to distract your opponents and steal a pot. However, jokes can be a great way to create a jovial image. From there, you can start to tell some stories of your own or you can recount some of poker’s funniest stories. To help you spin a yarn, tie your opponent in knots and have them in stitches, we’ve outlined some of the game’s greatest capers. So, without further ado, sit back, relax and let’s have some fun…

There’s always something happening at the WSOP. Usually, it’s amateurs making their fortune and pros adding to their already burgeoning bankrolls. However, there are also times when something unexpected happens, and 2010 was one of those times. With companies seeing the WSOP as a commercial opportunity, an online poker operator tried to enter a chimp into the Main Event.

Clearly inspired by this, Jack Link’s let sasquatch run amok inside the Rio Casino during the 2010 festival. As a headline sponsor, the American beef jerky company had cleared the deal with WSOP officials beforehand. However, it certainly startled players when a 10-foot tall beast went on a rampage across the poker room.

He may not have found it funny at the time, but the poker community was buzzing after Daniel Negreanu bought into the same event 48 times! Never one to shy away from saying what he thinks, Negreanu has produced a number of popular vlogs about his time at the WSOP. However, in 2009 it seems he was more intent on letting his money do the talking.

Hellbent on winning a bracelet, he re-entered a $1,000 tournament 47 times. That, on top of his original buy-in, meant he spent $48,000 trying to win gold. To break even, he needed to finish in the top 10. Not only did he fail in that mission, he failed to make the money at all! To top things off, his old rival Phil Hellmuth went on to win the event.

We love Phil Hellmuth. Despite his tantrums, tears and foul-mouthed tirades, he’s been one of poker’s best ambassadors for years. Naturally, we couldn’t do a rundown of funny moments without mentioning the Poker Brat (multiple times). However, in this review, we’re not going to highlight one of his many, many rants. Instead, we’re going to look at the time he crashed.

Set up as a PR stunt, the incident saw Hellmuth speed across the Rio’s parking lot in a racecar and smash into a concrete post. At the time, there were rumors it was a fake crash. Regardless, the incident made the news and certainly gave everyone a chance to laugh once they discovered Hellmuth wasn’t seriously injured.

He might be the best player in the world, but even Phil Ivey is prone to mistakes. Whether he thinks it’s funny or not is another matter. However, to see the great man let go of a winner does raise an eyebrow or two. The story goes that Ivey didn’t realize there were spades in his hand in that critical WSOP Main Event hand. Unfortunately, the 5s Qh 10s Qs As board did, in fact, give him a flush.

When he was told that his blunder was captured on camera, Ivey wasn’t a happy camper. The viewers, on the other hand, got to chuckle safe in the knowledge that even the greats can make a mistake from time to time.

It’s an oldie, but it’s a goodie. Anyone who knows poker players knows that they love a prop bet. In 1996, Brain Zembic made the ultimate bet and agreed to get breast implants. The stipulation was that he had to keep them for a year to win $100,000. Well, he not only followed through on his side of the bet and cashed $100,000, but he also kept his newfound assets for a lot longer than a year.

If you can’t get a laugh from that story, you may need to work on your delivery. If you can, you may just be able to win over your tablemates, make a few friends at least and pinch a few pots at best.