Recently, we discussed several reasons for raising while playing hold’em: Raising to Thin the Field; Check-Raising (building the pot); Raising for Value; and Raising for Information – to enhance your winnings.  Many players may not be aware of other strategies related to raising, so below are four special cases you ought to be aware of and add to your arsenal. 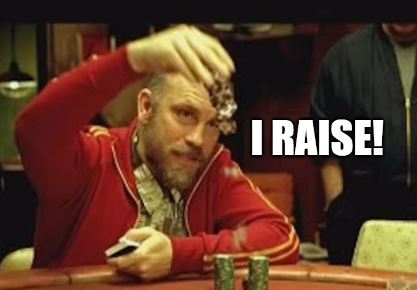 Raising Pre-Flop in a Tight Game

Raising from an early/middle position before the flop with playable non-pairs, and using the Esther Bluff, you are representing a big pair in the hole. That’s what your opponents put you on.

Results: Thinning the field increases your chances to win the pot (hopefully, your hand will improve). Also, after your raise, the remaining players respect and may even fear you. You are in control. Usually, they will check to you on the flop. Then, your continuation-bet may steal the pot. It’s a semi-bluff.

Likewise, pre-flop, if you are in a late position and the betting is folded to you, leaving only the Button and the two blinds, your raise can steal the pot. Not a big pot, but enough to pay for your next blinds. Don’t try this maneuver if there is a loose-aggressive opponent yet to act.

Raising on a Weak Flop

C-betting a weak flop tends to work relatively often. For the same reason, raising a c-bettor on a weak flop can also work out pretty well.

Poker lesson of the day, by my buddy Eugene: “One and done.” A c-bet made on a weak flop – take it down uncontested, or fold. #poker

Two others and you limped to see the flop. It is a weak flop – middle and small cards, unsuited and no connectors. One opponent bets out; you are next to act. You have a playable hand – say J-10 offsuit – that would need to improve to beat your opponents on the showdown. In this case, make your raise using the Esther Bluff.  This may well be enough to force the others out, leaving you the pot.

Reraising Pre-Flop with a Made Hand

Holding A-A, K-K, or Q-Q, there has been an early-position raise. Several players call the raise. Your turn to act. Your reraise will thin the field and/or build the pot. Reducing the number of players in the hand increases your chance of winning.  Those who had already called the original raise, almost certainly will call your reraise, thereby building the pot you expect to win.

Poker Tournaments: When you have a strong hand early, try to build the pot to get ahead of the rest – more pressure for them

Hopefully, cheating never happens in your casino… If two players are colluding (cheating) to build big pots when one of them has a powerful hand, raising is their weapon. On the flop, Player A signals (by a prearranged scheme) to his “partner” (Player B) that he has caught a big hand – say it’s a set of 9s.

Player A, in a middle position, just calls an early-position bet, along with several others. Player B, in a late position, then raises the bet, thereby building the pot when everyone who had already invested a single bet, calls his raise.

On the Turn, with his set of 9s apparently well in the lead, Player A just calls an early-position opening bet along with several others. Then, Player B makes the big raise. Several opponents and Player A call his raise. The pot is growing!

On the River, with no discernible threat to Player A’s set of 9s, after an early-position bet, Player B raises the pot. Two opponents call his raise. Then Player A re-raises. When the action returns to Player B, he shakes his head, and quietly mucks his hand. (He didn’t want anyone to see what he had been raising with.) And the colluding team takes a monster pot.

This article has been brought to you with the support of BusinessInfoNews.com. For more information, please visit their website.