I am pretty sure I have said before that a book I was reviewing at the time changed my life, but this time it didn’t just change my life, it completely 100% altered my entire poker existence. I was one person when I opened to the first page and I was a different person by the last page. I am not exaggerating. I was already a winning player before reading Alex Fitzgerald’s book Exploitative Play in Live Poker: How to Manipulate your Opponents into Making Mistakes, but now I dominate!

I am a relatively new player to the game, so when I say I was already a winning player I don’t mean to say I was banking a few hundred grand annually. Rather I just mean I was slowly increasing my bankroll — and I mean slowly. And when I say that I now dominate I don’t mean I am on par with the superstars of the game; far from it. Rather, I feel excited to have learned plays the superstars have most likely known for years. I am thrilled that my win rate has increased, and I owe it directly to Alex’s book, published by the venerable D&B Poker. 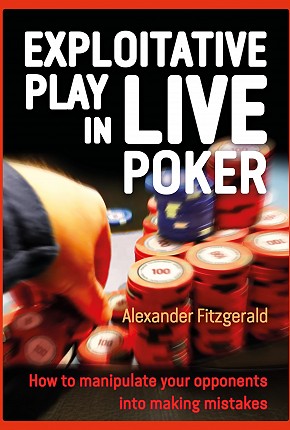 I have studied poker for a little more than five years now, and I have a pretty solid foundation. So, what’s next? Time to start building on the foundation. It isn’t time to stop and take a break, I am just getting started. Everything I learn moving forward takes my play to the next level to where I can start to say I am learning to use some of the tools that the superstars have in their tool box. Start at the ground level and build my way up to the penthouse! Alex’s book is the architect’s blueprints. The thing about it is his book doesn’t read like a complex construction diagram for trained professional carpenters. Instead, it is easy to read and understand, like Lego instructions. If you want the engineering behind it, be sure to check out his other book The Myth of Poker Talent, which I already ordered. I did a review for the video series last year.

Who Is This Poker Book For?

My game was somewhat passive, I would say. I never really used aggression because I didn’t understand when to use it. This book explains what to look for so you can apply well-timed pressure. The result is twofold: first, I get to pick up more blinds per hour without much resistance, and second, the field perceives me as much more of a threat now. They are not trying to steal the blinds from the button or 3-betting my early open nearly as much. If you don’t understand how or why that is a benefit, you need this book really badly!

In the long run, the difference between being a just-above-break-even player and a winning player is precisely the few extra blinds per hour you either pick up or leave behind. This is especially true for you live casino tournament players out there. I am a cash game player so now when I double up on those deep stack clashes, I double up with far more chips in my stack than before because now I am slowly chipping up every orbit whereas before I was more or less just playing my cards. You hear people talking about “playing the player” or “playing your position,” but until you figure out what they are talking about you can’t take advantage and capitalize on it. I once saw a video where someone won a sit and go covering up their hole cards with a sticky note. They were applying the principles illustrated in Alex’s book.

I don’t know about you, but I am never going to be satisfied with where my poker game is. I must admit I don’t know what I don’t know. I have to go out there and find the answers to the questions I don’t even know that I have. I don’t want to just grab any old book from any old shelf and learn any old information. I want to learn the best from the best.

I am telling you: Alex Fitzgerald is the best of the best.

Not only because of his poker knowledge, but because he has a talent for expressing and conveying his poker knowledge to the reader. He speaks my language and I am going to go out on a limb and wager that he speaks your language as well. If you are the kind of person who loves the game of poker so much you read poker blogs like Cardplayer Lifestyle, then I can make that wager with confidence!

Alex doesn’t beat around the bush, he is straight forward and doesn’t get lost following rabbit trails. I also really like the way he challenges his readers. He really pushes me to go for it… or, alternatively, settle for being a “loser.” That kind of encouragement motivates me! I don’t want to be a loser! I don’t want to settle for “passive just above break even.” I want to sit down at the table and dominate. Alex Fitzgerald’s book Exploitative Play in Live Poker: How to Manipulate your Opponents into Making Mistakes gives you the weapons in your arsenal to not only win but dominate the table. After reading this book you will never be the same.