NOTE: AS OF JULY 2020, THE TONYBET POKER ROOM HAS BEEN CLOSED 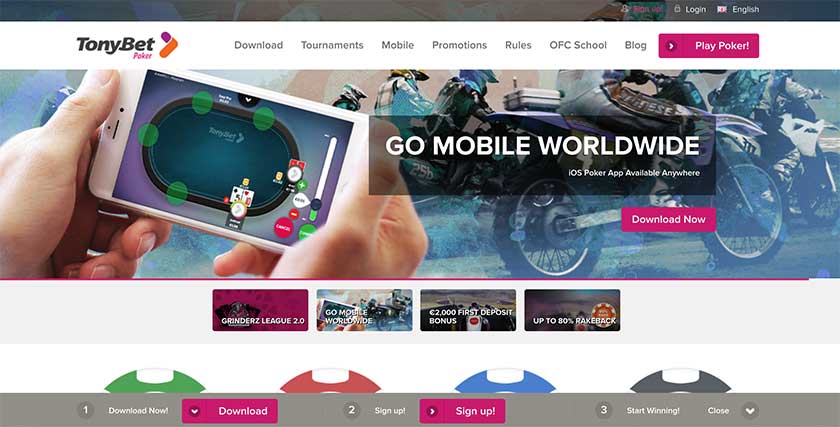 While it was established back in 2009, the TonyBet brand actually dated back earlier to 2003. It was during this time that the OmniBet brand started its operations and grew to become a formidable sports betting platform. Six years after the start of its operations though, Lithuanian poker professional and businessman Antanas “Tony G” Guoga acquired the brand. After the acquisition, Guoga then moved to rebrand the sportsbook to its eventual name. The brand again got acquired in September of 2016 when Betsson (a Swedish company) purchased the company for €6 million. Though Tony G has since moved on to other endeavors he was still considered the face of the brand.

Despite Tony G being well known as a professional poker player, it took the TonyBet brand until 2013 to come up with its own poker room. With that said, the brand did manage to distinguish its poker room from the competition. Aside from just offering popular poker variations like NL Holdem and PL Omaha, the poker room also had a section that featured Chinese and Open-Face Chinese poker variants.

Other than being the only poker room to prominently feature Chinese and OFC poker, TonyBet was also the first to host and promote the World Championship of OFC. This tournament series started out in 2014, a year after the brand debuted its poker room, and continued for a couple years. The last OFC Poker World Championship was scheduled for December of 2017, but our research brought up nothing pertaining to the results of the said event. Cursory searches on Google will only bring up the results for the 2014 and 2015 events.

The 2014 TonyBet OFC Poker World Championship was notable particularly because of the €218,500 prize pool generated by its €10,000 buy-in High Roller event. Additionally, the €1,000 Main Event of the World Championship also managed to gather 135 entries (which was the largest at that time).

Players who weren’t too concerned about the TonyBet OFC Poker Championship could still opt to compete at OFC and plenty of other poker variants in the comfort of their own homes thanks to the numerous online tournaments the poker room offered. There used to be tournaments like the €5 Guaranteed Jasper which had a €.75 buy-in and was available multiple times a day. For players who wanted to try out the poker room but don’t want to spend real money yet, there were Freebuy play money tournaments which featured €25 guaranteed prizes that anyone could join for free.

TonyBet Poker also offered Sit & Go tournaments (Turbo Heads-Up, Super Turbo 6-Max, Turbo 6-Max, 6-Max, and Heads-Up) for players who preferred faster games. Much like the regular tournaments, these SNG tournaments had different buy-ins and prizes. The buy-ins typically ranged from €1 to as much as €50. Depending on the buy-in and the type tournament, players would compete for prizes ranging from €1 all the way up to €95.

Though it had promoted a live tournament series, TonyBet did not have a team of poker professionals or even an individual in its active employ to represent it. More than representing the brand though, Tony G was the brand himself. With that said, for a time (from 2010 to 2017), the brand sponsored the Lithuanian national team as well as some Lithuanian and Estonian basketball clubs, which in a way was an “extension” of the Tony G. brand, as he hails from Lithuania and is Vice President of the country’s Basketball Federation.

TonyBet Poker had a Starter Bonus that players could take advantage of if they wanted more value for their initial deposits. Provided it was their first time depositing on the site, players could make use of this promotion to get a 100% match offer that could go as high as €2,000. It should be noted though that players weren’t going to get the whole bonus amount right away. Instead, the online poker room would give the bonus out in €10 increments. For the site to release an increment, players would need to have generated four times the bonus increment amount in rake.

Players found it relatively easy to access TonyBet Poker. The poker room had a dedicated software client that players could download and install on their desktops/laptops running Mac or Windows. If they preferred to access the poker room on the go, players could opt to download the TonyBet Poker apps for Android and iOS on Google Play and the App Store, respectively.

As with a lot of online casino and poker room brands targeted at the European market, TonyBet Poker had two licenses to operate. The first of these was a license issued and regulated by the UK Gambling Commission that covered the brand’s operations in the UK market. To provide its services to players outside of the UK (Europe and the rest of the world), the TonyBet Poker also held a license to operate issued by the Estonian Tax and Customs Board. Even so, there were still countries that the brand wouldn’t service (e.g., USA).

As mentioned earlier in this review, before it became known as TonyBet, the brand started out as OmniBet, a sportsbook and online casino, and was established in 2003. Sometime in 2009, the OmniBet brand was acquired by Antanas “Tony G” Guoga who then rebranded it to TonyBet. At that point, Guoga was years into a successful professional poker career and was also the owner of several poker-related sites such as pokernews.com and pokeraffiliateworld.com. Initially offering only sports betting and online casino services, the brand soon expanded to offer live betting services on poker games as well. By 2013, the brand eventually rolled out its own poker room.

Unlike most poker rooms though, the brand opted to include Chinese Poker and Open Face Chinese Poker in its offerings. In fact, the poker room’s main selling point was that it was the first to offer these variants (which were popular in countries like Finland and Russia). A year after its debut, the brand started the First World Championship of Open Face Poker, a series that saw Jennifer Shahade winning the inaugural High Roller Event and Mikal Blomlie coming up victorious in the Main Event.

Sweden-based company Betsson eventually acquired the brand on September 8, 2016. Unlike the acquisition of OmniBet though, Betsson had not moved to change the TonyBet brand. As for Tony G, it would seem that he has distanced himself from the brand. With that said, the former poker pro was still visible on the brand’s ‘About’ pages.

Question: Did  the software allow for playing at multiple tables at once?

Answer: The TonyBet Poker software offered multi-tabling support for players who wanted to attempt to get as many hands in as possible during their sessions. Players were given the option to cascade their open tables and organize them in whichever way they wanted.

Question: Was there a VIP & Loyalty rewards program for frequent players?

Answer: To help frequent players get more value for their deposits and gameplay, TonyBet Poker re-instituted its Grinderz League program. This was essentially a leaderboard that rewarded the most active of players. To get the most of this, players needed to gather up points by joining cash games, Sit & Gos, MTTs, and other tournaments. The rake and fees that players accumulate would then be the basis for the poker room’s calculation of their points. If they managed to get to the top 20 on the weekly leaderboards then players would be given an equal share of a €50 prize pool. In addition to this, the poker room also rewarded the top 20 players at the end of the month with shares of an even bigger €3,000 prize pool.

Question: What were the wagering requirements of the signup bonus?

Answer: TonyBet Poker’s starter bonus was arguably one of the simplest in terms of wagering requirements. Similar to a lot of its competitors, the poker room only released players’ bonuses in increments of €10. This increment did not change regardless of the bonus amount availed by the player. In order for these increments to be credited to their accounts, players needed to make sure that they generated four times the bonus amount (€40) in rake and fees. It should be noted though that the poker room would only count rakes and fees generated in real money games, excluding satellite tournaments. Additionally, players were only given 60 days to work through the whole bonus amount. Any pending bonus that went unclaimed after the 60 days was voided. Unlike online casino bonuses, players could  readily withdraw from their accounts even if they still had unclaimed bonuses.

Question: Could I wager my welcome bonus on casino games or on the sportsbook?