Raymer was a fixture in the poker room Wednesday, playing and teaching mixed games, signing copies of his book Fossilman’s Winning Poker Strategies, and regaling tablemates with poker tales from his many years in the game.

Raymer was far from the only poker celebrity to make an appearance for some $4/8 fun, as legendary poker commentator Ali Nejad hopped into the action for a few hours, along with PokerCoaching.com teacher and WSOP bracelet winner Justin Saliba who joined for an evening session. Women in Poker Hall of Fame founder and member Lupe Soto also stopped by, headlining a contingent of women who represented up to 25% of the three tables in play at one point.

With almost any and every game available to be called, a couple of new ones made their way into the mix yesterday from the popular Lodge Poker Club in Round Rock, Texas.

The club owned by poker stars and vloggers Doug Polk, Andrew Neeme, and Brad Owen runs a Wednesday mixed game that has gained some notoriety from Polk’s vlog. A pair of staples from that game, “Fun Under the Gun” (A four-card game which sees the under the gun player choose between Omaha Hi, Omaha 8 or better, or Badugi based on seeing their hole cards) and “Squid Game” (a triple board Limit Omaha Hi game which sees three boards dealt with the board with the lowest river card killed before the final round of betting) were both called and became instant hits, with several players saying they’ll be bringing them back to their home games.

What’s up guys, Mike Patrick here. Sending some love to @DougPolkVids and @LodgePokerClub from the @PokerLifeMedia #MixedGameFestival.
I’ve called Fun Under the Gun and Squid Game and they’re both big hits! pic.twitter.com/5ey4XujH3x

A staple of the Cardplayer Lifestyle Mixed Game Festival is the split-pot five-card game of Oma-jack, which sees players trying to make an Omaha hand by combining two of their hole cards with three cards on the board, then using their remaining three hole cards to make a blackjack hand.

A hand appeared to have three players each making 21 to split half of the pot three-ways, but upon closer reading of the hands, with a straight possible, two of the players had to use their cards to make that straight (which lost to a flush), nullifying their 21s, and sending half of the pot to a single player.

A poor dealer nearly felt the venomous wrath of a HIGHLY disappointed player, who had to settle for vociferously and pointedly mucking their cards in frustration… over losing their 16.667% of the pot. 🙂 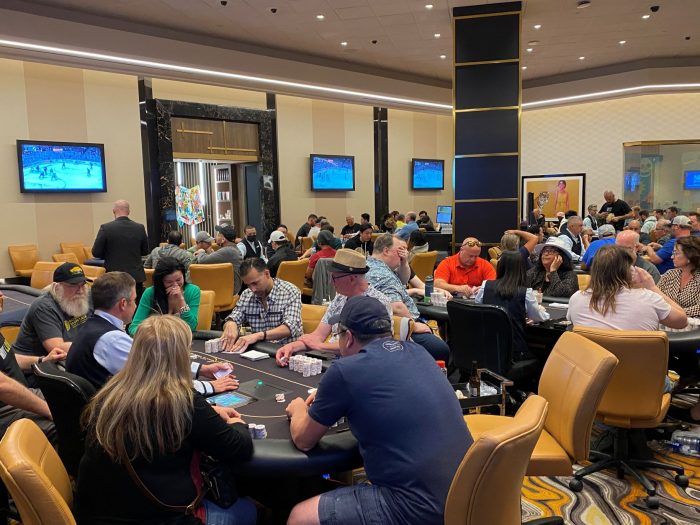 Thursday will see the conclusion of the festival, with the PokerStars Live prize package, that includes flight, hotel, and a 400 euro ticket to a Road to the PSPC ticket in a European city awarded to one lucky player who’s amassed entries into a draw based on their hours of play this week.

That draw will take place in the evening, so there’s still plenty of time to come down to Resorts World, join the fun, enter the draw, and maybe win some great swag from PokerStars, BBO Poker Tables, PokerGO, D & B Publishing, and RunGoodGear.

Poker Hall of Famer Eli Elezra is the day’s headliner, as he’ll be on hand to sign copies of his autobiography, Pulling the Trigger.

The second-ever Cardplayer Lifestyle Mixed Game Festival has been picking up momentum all week and is set to finish on a crescendo on Thursday. If you’re in Las Vegas, be sure to stop by and join in on the fun!

Want to learn what Mixed Games are all about? Check out our comprehensive guide!