Bernard Lee has long been a household name in the poker world. He’s won over $2 million as a player dating back to his deep 2005 WSOP Main Event run (he finished 13th), along with three titles. He’s also one of the most prolific personalities in the poker media, having written 7 years of weekly columns for the Boston Herald, penned 2 poker books (which can be found on his website www.bernardleepoker.com), been a columnist for All In and Card Player magazines, and acting as lead commentator for WSOP and WSOP Circuit events. He’s probably best known, however, as the host of The Bernard Lee Poker Show , which began in 2007) and for his excellent work at ESPN Poker. Finally he is also a team member of RunGoodGear.com. 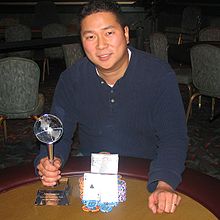 Bernard was kind enough to sit down with us here at Cardplayer Lifestyle for an exclusive interview. As he’s almost always the one asking the questions, it’s nice to be able to “turn the mike around” on him and learn more about one of poker’s most interesting personalities. We hope you enjoy; without further ado…

CPL: You made the transition to being full-time in the poker world in 2005. What did you do beforehand and what’s it like to move from “real world” jobs to become a member of the poker industry?

Bernard Lee: I worked for 12 years in marketing and new business development in the “real world” and, truly enjoyed my job! When I made the decision to transition into the poker world full-time, honestly it was a little scary at first because of the lack of security. However, it was truly a dream opportunity and I haven’t looked back ever since. I have been fortunate to be able to combine playing professional poker with my media opportunities.

CPL: Unlike many who transitioned to full-time play, you made a hybrid move to part-time play + working in the industry. Why not just play full time like so many others and not have to “answer to the man”?

BL: I enjoy the combination of playing full time and also being an integral part of the poker media. It allows me to really enjoy all aspects of the game not only from the playing side of it but also from the reporting and analysis side. Of course, I love playing professional poker against some of the best players in the world on the biggest stages in the world. However, I have also truly come to love being part of the media and reporting on some of the top events in the world of poker.

CPL: You’ve been hosting the Bernard Lee Poker Show for over 6 years. Who are some of your most memorable guest s and why?

BL: I’ve had some fantastic guests over the years including Daniel Negreanu, Mike Sexton, Erik Seidel, and almost all the members of each year’s November Nine. It has always been a privilege to interview superstars including the WSOP main event champions and also the rising young stars of the poker world.

That said, the two people who are really, the most memorable guests; one was Chris Moneymaker.

Before I entered the word of poker full-time, I was a poker fan. Watching Chris Moneymaker like millions of other poker fans, it was really a privilege to be able to talk with him and interview him about the improbable victory in 2003. He is such a down to earth person and since then, we have become good friends.

The other interview that was really memorable was probably the only interview I was a little nervous for, and that was with Doyle Brunson. The “Godfather of Poker” is so iconic and I began my poker learnings through Super System, so talking with Doyle not only about poker but also his life story was really an honor and a privilege.

CPL: You were kind enough to have me on your radio show a couple of times to talk about the Poker Notes Live app. Your excitement for the product was palpable – thank you! Why do you think it’s so critical for live players to take notes?

BL: When I first started playing back in 2005, I was known for taking notes of every single hand I played. I had a little binder that I carried with me from tournament to tournament for about 3–4 years. It was absolutely critical for my learning to go over these notes and to review the hands that I had played, looking at not only the moves that I did well, but also the errors.

Taking notes improved my game so rapidly and really helped me become the player I am today. Therefore, that’s why I think Poker Notes Live is such a valuable tool for any player to have and would truly be advantageous for players to utilize.

CPL: Working for ESPN Poker must have some special perks and grant you access and privileges at big poker events that recreational poker players and fans could only dream of. What are some of the coolest things you’ve been able to do or see as a result of your position in the industry?

BL: Working for ESPN is a dream come true for any sports fan, including myself. One of the fortunate activities that I have been able to enjoy due to working with ESPN and being part of the poker media industry is first and foremost covering the World Series of Poker Main Event Final Table. It has really been one of my poker media highlights of every year. I enjoy going to watch the World Series of Poker not only as a media member but also as a fan.

In addition to that, when ESPN had the Inside Deal show, I really enjoyed working at ESPN headquarters in Bristol, Connecticut and doing the show on the equivalent of the SportsCenter desk. Every single sports fan would love to be part of SportsCenter and I got to live out that dream for a few years.

In addition to that, we were also able to see some special events at ESPN, one of which was the making of the Usain Bolt commercial. It occurred right outside our studio and we were able to watch the taping just after we finished one of our shows.

CPL: Though you unfortunately haven’t won a WSOP bracelet yet, you’ve clearly achieved tremendous success in poker – with millions of dollars won at the felt. What do you think would change for you personally if/when you win a bracelet?

BL: Winning a bracelet is really the goal of any poker player and is truly my goal in poker. I don’t think it would change me personally, but it would definitely satisfy one of my dreams in the world of poker.

CPL: Last year you signed a sponsorship deal with Rungoodgear.com. Please tell us a little bit about why you got involved with that company?

BL: To me, RunGoodGear not only has an excellent and comfortable clothing line, but in addition to that they have a theme that is not only suited for poker but also it’s suited for life. Running good isn’t just in poker, but running good is something that you hope will happen every day for your family, for your friends, and for yourself. 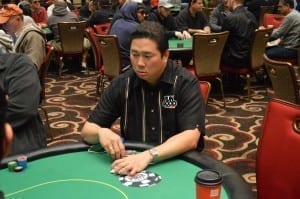 Over the past few years, RunGoodGear has really become one of the solid brands in poker. They’re also hosting a tournament series in March at the Downstream Casino in Oklahoma, where several team pros, including myself, will be in attendance. I will also be holding a couple of free seminars for the participants.  I hope that if anyone is in the area that they come by, play in some of the tournaments, and say hi.

CPL: With all of your poker successes, both at and away from the tables, you’re still just in your early 40s – you’ve got a whole lifetime ahead of you. What more do you hope to accomplish as a player and as a poker media personality?

BL: As a player I would like to continue to improve my game and to have longevity in the game. One thing that I’m proud of is that I’ve been playing since 2005 and I continue to play and be successful at the poker tables.  I hope to continue to evolve with the game and take down some more titles and, as I mentioned previously, to win a WSOP bracelet.

With regard to the poker media, I’d like to be more actively involved, whether it is writing additional columns or commentating live streaming events. I’d also like to continue my radio show by interviewing all the upcoming poker superstars.

CPL: You’re well-known and lauded in the poker community for maintaining an excellent work/play/family life balance. How does Bernard Lee react if one of his children grow up and say they want to be a professional poker player?

BL: I’ve enjoyed being a professional poker player not only on the felt but also off the felt because it really has given me an opportunity to spend a lot of time with my family. I’m able chaperone a lot of school trips and bring my kids to their after-school activities. I’m able to coach my kids in basketball, tennis, and swimming. 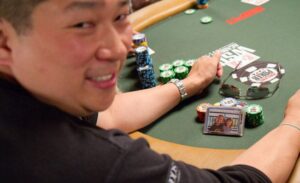 However, if one of my children wanted to become a professional poker player, I would first ask them to complete their education and also get a full-time job.  The reason why I would ask them to do that is so that they would appreciate and value money. Too many times, I have seen young players not understand the value of money because they have not had the opportunity to work for a living. Poker is an industry without guaranteed money, so appreciating poker winnings and saving it for a downswing is critical for future success.

CPL: You’ve done an amazing job over the years at harnessing the power of poker for charity.  Please tell us about the noble charity poker work you do with your Full House Charity.

BL: I feel I’ve been very fortunate to have a dream job. Because of that, I decided a few years ago that I wanted to give back to the community.  To do this for charity, I wanted to combine two of my loves: poker and my family, specifically my children. So, what I have done over the last three years is made sure that I have taken care of underprivileged children in the New England area who would not have had a Merry Christmas or Happy Holidays without help. I have donated goods such as clothing, toys, books, sporting equipment, and many other items in excess of $10,000 each year. I have taken care of over 50 children each year to make sure that they have had a Happy Holiday season.

I am very thankful to RunGoodGear.com and Chili’s restaurants who were the main sponsors for our charity event this year.

CPL: Bernard, we know that you have authored two books. Where can Cardplayer Lifestyle readers find more information about you and your books?

BL: I wrote two books that were compilations of the Boston Herald columns that I wrote for over 7 years. You can find those on my website, www.bernardleepoker.com (where you can also find out more information about me).

Thanks again so much for your time Bernard, from me and from all the poker fans here at Cardplayer Lifestyle.