During my trip to the 2019 European Poker Tour stop in Sochi I had the opportunity to speak with Mikhail Shalamov, a proud member of PokerStars Team Pro Online. As much of Cardplayer Lifestyle’s audience has little to no familiarity with Russia, I thought it would be apropos and interesting to speak with one of Russia’s native sons to learn more about the world’s largest country by land mass. Rather than one of my typical interviews, I thought it would add an element of fun entertainment to utilize a quiz format, and I want to thank Mikhail for being a good sport.

What I actually enjoyed most about our sit down was the banter we had in between questions, during which I also learned a few new things about Russia, the Russian language, and some of the country’s history and most famous personalities. I hope you’ll enjoy watching as well.

A lot of Cardplayer Lifestyle fans aren’t too familiar with Russia and all things Russian, and I wanted to introduce them to a few words, phrases, famous historical figures and sporting personalities. I figured who better to assist me than a native Russian son.

We’ll do this like a game. I’ve got 10 questions here. For every correct answer you get 1 point — and you don’t lose a point if you get an incorrect answer.

Hopefully the viewers at home will learn some things along the way. Now remember, I expect a perfect 10 out of 10, but if you get 8 questions or more correct, you win a prize.

Mikhail: I am always ready.

1. Which of the following phrases means “good morning” in Russian:

Mikhail: Actually it’s none of the above because in Russian it’s said as one word: Dobreutra.

2. If we would like to make a toast to good time in Sochi, in Russian, we would grab a couple of beers and say what?

Mikhail: People who aren’t from Russia always think we say Nadarovie, but that’s not actually the case. There are plenty of phrases we use, but I haven’t been drinking for two-and-a-half months, so I can’t remember the appropriate phrase for saying “cheers” in Russian. Russian don’t need an official phrase in order to drink…

Mikhail: I remember how she looked; she was the tall one… (yes, for a gymnast – she was about 5 feet 4 inches)… if you showed me a picture I would remember. Such a shitty feeling when you know that you know something, but you just can’t remember exactly what it is. Like in poker, you know that you’re beat but you still have to call…

The correct answer is Svetlana Khorkina.

4. What does the word “Sochi” mean in Russian?

Mikhail: I don’t think it means anything… it’s just a name, like the word “Moscow” doesn’t mean anything.

(Fake answer: It means “all-in” – so be careful at the tables here when you say “Sochi”). Of course it doesn’t actually mean anything, but it is a beautiful name for a beautiful city.

5. Which of the following people was NOT a famous Russian tennis player?:

Mikhail: I think we’re flipping here because Davydenko helped us win the David Cup once upon a time… I’m going to guess Nikolai Volkoff.

Yes, that answer is correct, Nikolai was a fictional WWE character and he was actually Yugoslavian.

Of course it’s false, but it DOES sound funny when you say it… 🙂

7. True or False: In the lead up to the 2014 Winter Olympics, Russia invested approximately 50 billion rubles into Sochi’s infrastructure to make appropriate preparations.

Mikhail: I’m going to say “true”… but I think it was invested not only in Sochi infrastructure, but also in the homes of some important politicians. Bottom line, however, I say that yes, it’s true.

Actually, it’s false because it was $50 million dollars; which is over 3.2 trillion in today’s Rubles. And when you go tourning around Sochi as well as in Krasnaya Polyana, you can see the lasting effects of this gigantic investment. Excellent infrastructure, magnificent venues, buildings that are still being used many years after the Olympic Games.

Mikhail:  I actually hadn’t been to Sochi since my childhood. The first time I came to visit as an adult, after the Olympics, it was amazing. Lots of cool hotels, a beautiful built-up shoreline. Sochi Park is also a cool place to hang out with or without your kids…

8. Russians love hockey; it’s a big sport, including here in Sochi. One of the NHL’s most famous players, Alexander Ovechkin is Russian. He was born in:

Mikhail: I’m going to guess Vladivostok because Moscow or St. Petersburg seems like too easy of an answer.

Well, unfortunately the answer is Moscow, but Vladivostok is about an 8- to 9-hour flight from Moscow, perhaps about 10 or 11 hours time difference… it’s in the Far East, near Japan.

9. Nicholas the Great was:

Mikhail: It was definitely the last emperor. I think they shot him and his whole family in my hometown of Yekaterinburg. Also, there is a guy named NicholasDLP (that’s his online screen name on PokerStars), he plays lots of cash games and tournaments online; he’s a great player and I think he even comes to play live here in Sochi.

10. What do all of the following people have in common?:

Mikhail: That’s a hard question; too many people to group together… I’m guessing that none of them have won the WSOP Main Event?

You’re surprisingly very close to the correct answer, which is that none of them was ever any good at Pot Limit Omaha. 🙂

Mikhail, your score was a very respectable 6 out of 10 and for that you win this beautiful Cardplayer Lifestyle patch.

That brings to an end this edition of How Well Do You Know Russia? Thank you again so much to PokerStars team online pro Mikhail Shalamov for playing.

This has been Robbie Strazynski for Cardplayer Lifestyle at the 2019 EPT Sochi. 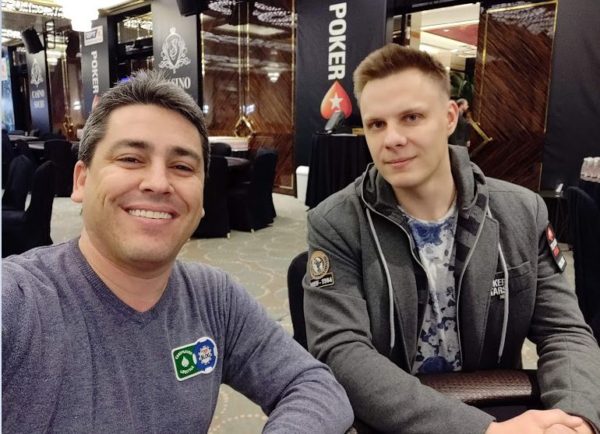