A Glimpse Into the Mind of a Poker Pro

I imagine that a lot of Cardplayer Lifestyle readers probably wonder what the difference is between themselves and a world-class poker player. What separates you from Fedor Holz or Phil Ivey? I used to think I was pretty good at basketball, and for a streetball player I was pretty good. Then I got the chance to play with some ex-NBA players and some serious Division I college players. Apparently I am terrible at basketball.

The experience of playing with serious basketball players was eye-opening. They were incredible. I was used to being the best player on the street courts where I played, and I expected them to be better than I was, but it was like being a child playing with grown men. Playing with the best poker players in the world is a similar experience if you show up to the WSOP after being the best player in your home game or at your local card room. But it doesn’t feel the same.

The luck factor is a part of it – much like you never know if you might win big after receiving free spins at a slot machine. But the biggest contributor to amateurs overestimating their own skills is how much information is hidden. When a pro dribbled around me fast as lightning and dunked (again), I could see his advantage. But when you get outplayed by a poker pro, you often have no idea what happened. You can’t see their cards and you don’t know what their thought process was. You don’t what they saw in your eyes, your body language, or your bet sizing. You may have no idea that they just owned you.

So, my goal with this piece is to give you a look into the world of a serious professional poker player. How they think, what they notice, and the way they make their decisions may be completely foreign to you. Learning these things can obviously help your game, but it can also help you gain an understanding of how the pros play and what their thought processes are. At the very least, hopefully reading this will help you avoid getting trapped by them so often if you play in tournaments with world-class players in the future. 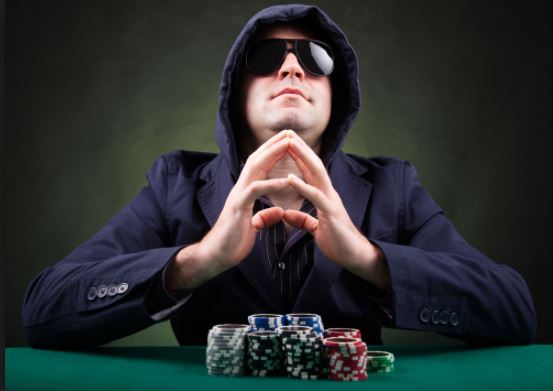 Let’s start with what they see. Every player has a little different skill set, but a good live pro is watching all the time, picking up information that they can use later. If you walk up to the table looking at all the players and their stacks, we notice. If you ask to see someone’s chips, we note that you understand at least something about stack sizes. If someone shows you the winning hand and it still takes you five seconds to throw your cards in the muck, or you feel the need to show them to the table before folding, we remember that you have trouble accepting that your hand is beat and may pay us off in a future hand.

Everything from your clothing to your facial expressions and body language tells us something about you. And it’s unavoidable. You can be less readable, but even that tells us that you have put some work into it and are thinking about covering those things up. If I run into a robot who constantly watches the table and doesn’t speak or move, I know that he is a killer, and I am very careful playing hands with him. But it’s better than being completely readable. I love playing hands with those guys.

A great player doesn’t just glean information about their opponents. They also know how to use it. If I know that you are a thinking and aggressive player, and you three-bet me with 24 big blinds in your stack, I won’t ever go all-in on a four-bet bluff because a player with a serious poker education is almost never going to three-bet fold against me with a stack that short. With 35 big blinds, however, I know they could fold and they may be three-betting light. With a player who appears to be inexperienced or uneducated – a recreational player – I may shove all-in as a semi-bluff in that spot because they may be able to make a bad fold and may overestimate my four-bet shoving range.

Do you know what we are doing when we ask to see your stack? Most recreational players assume that we do that just so we know how much money we are risking or how much we could win if we have the best hand. But it’s much more than that. If you raise my big blind from middle position with a 24 BB stack, I am actually more likely to defend with a hand like 68s than I would if you had 34 big blinds. This is because I have some great moves for my hand against your stack size.

If we assume that you raised to 2.5 big blinds, there will be around 6.5 big blinds in the pot when we see the flop. If I flop a draw, I can check, and when you bet I can move all-in to win a pot of around 10 big blinds right there. If you missed, you fold and I win, which will happen often. But if you call it doesn’t hurt me too badly because you only have another 17 big blinds left in your stack and I have a draw to bust you… unless I see you miss the flop.

One of the most reliable tells in poker is when a recreational player stares through the flop for a few seconds after it falls. They are waiting for it to get better, unwilling to believe that the poker gods have forsaken them yet again. They are angry with this stupid flop. In that case. I can lead out and steal the pot right there if I think they missed and I haven’t flopped a draw myself.

READ MORE: Making a Living as a Tournament Poker Player

What if I flop a monster? With these stack sizes, I have a great weapon for that, too. If I check-call the flop, you will often bet again, and my check-raise all-in on the turn won’t be much more to call. You will have trouble folding with almost 40 big blinds in the pot and only 10 left in your stack if you have any piece of the board. And if you fold I have still won a nice-sized pot and crippled you. If you check behind on the turn, you will often have enough to call a reasonable sized bet on the river. I’m so aggressive that you will expect me to be bluffing the river after your sign of weakness on the turn. And, again, I’ll win a nice pot.

With 34 big blinds in your stack, my moves are different, and tougher to use. You can hurt me worse if I lose the pot, and being out of position could be a problem for me with the awkward stack size. If I have position, things are much easier. With the 24 big blind stack, my weapons are almost too many to list.

Do you know what a resteal is? It’s one of my favorite things to teach to new students because it is so powerful, but most recreational players know nothing about resteals. With a few days work, you can play a 12-20 big blind stack almost perfectly using one of the most powerful tools in tournament poker. Here’s a quick look at the math of a resteal.

If an aggressive player raises from the cutoff seat with a big stack, we use our best guess to estimate their range. Let’s assume that this player is raising 30% of their hands in this spot. If you go all-in with 15 big blinds from the small blind, the big blind will only call around 3-4% of the time, and when they do you get to see all five cards; sometimes you will win. But that 3-4% isn’t too scary.

The original raiser will typically only call with about 7% of their hands even if they know about resteals. If they are a really great player, and they know that you play well enough to be capable of a resteal, then their original raising range might be much tighter, but we are assuming a typical player who won’t be worried about resteals and will just be raising lots of hands because that is what they think you should do with a big stack in late position.

This means that 23 out of 30 times they will fold and the big blind will call about 1 in 30 times. So,  22 out of 30 times your all-in move will be successful and will win a pot with about five big blinds in it. You increase your stack by 33% without seeing a flop most of the time.

And when they do call? Well, you should usually be restealing with a hand that has some equity all-in against the top of their range. A hand like the aforementioned six-eight suited is a good example. Getting all-in with eight high seems maniacal to many inexperienced players, but it’s a great hand in this spot and super profitable. If they call, you will have around 32% equity against their range. So out of every 30 times you make this play:

The actual equity of the play is thus 110+45-82 = 73 big blinds. You make almost 2.5 big blinds per attempt. This is an increase of almost 17% to your stack every time you make this play. In fact, this play is so good that you really can’t beat poker tournaments without it. So, knowing that the other strong players at the table know about this play and may resteal against you or set you up for a resteal can save your tournament life!

The resteal is just one example of a weapon that a professional poker player has probably used against you. We know what stacks we should resteal with, against what opening ranges, and with which hands. And with deeper stacks our weapons multiply.

Do Recs Stand a Chance Versus Pros?

My hope is that this article doesn’t intimidate you, but rather that it educates you and gives you a glimpse into how the pros think. I love recreational players. We need them in the game. I was one myself when I started playing and I hope to be one again someday when I retire from competitive poker. But giving recreational players a fighting chance is what I have done for most of my poker career. Even a few lessons makes a big difference, and a training site can make a huge difference for a very small investment. I recommend LearnWPT.com for tournament players and RedChipPoker.com for cash game players as excellent sites with lots of educational content for very little money.

I hope to see you at the tables. Just don’t use the information in this article against me, I’ve got bills to pay.