Every poker player has been there, you flop a good draw, you start feeling excited but you are unsure on how to play it.

Sometimes you only need one card to make that powerful hand, and yet you may find yourself folding to a bet or – even worse – paying too heavy a price that will not help your profits in the long term. Playing draws can be a tricky thing, as there are many considerations to be made. Often people call when they should fold, check when they should bet, etc. If you also don’t know how to play these types of hands effectively, this article ought to help you improve your play and balance your range, making you a more profitable player in the long run.

So, whether you’re a fan of playing poker at Betsafe or some other online poker room, or alternatively if live poker is your preferred cup of tea, here are 10 factors you should take into consideration when playing draws.

*Note: This is basically an advanced-level Texas Hold’em cash game strategy article. Some concepts apply to tournament play, but most of the recommendations given below are based on a 100bb stack unless stated otherwise.

In most cases, the more outs you have, the more aggressive you should play.

Combo draws, such as flush + straight draws, are usually good enough hands to go broke with, especially in 3-bet pots. Weaker hands such as gutshots and open-enders, however, can be categorized by their playability as well. Therefore you should take into account whether it has any showdown value, how hidden your true value is, and whether or not it is a draw to the nuts.

For example, on a T72 flop in a big blind vs. small blind battle, a QJ flush draw is a much safer hand to call a c-bet with than a 64 flush draw. This is because QJ plays much better on later streets: you can make top pair and your opponent may fire a second barrel on a scare card. I don’t advise you to raise with the 64 100% of the time, but in most cases you should at least consider it and take into account other factors that we will discuss later on.

There is also the backdoor draw. Backdoor straight draws can often be disregarded, as they have a very low probability of hitting and could have large reverse implied odds. As for backdoor flush draws, those can be powerful, especially if combined with overcards or bluffing possibilities.

For example: if you have As2d on Ks9s2h board, you block your opponent’s nut flush draw and you can scare him off the pot on the later streets if a third spade comes.

However, most often you don’t want to count on the odds of completing a runner-runner draw, as they have around a 4% chance of happening.

This point ought to be quite obvious: pot odds and implied pot odds should be familiar concepts to any aspiring poker player. In certain situations, especially when you have too many bluffs in a spot, calling and taking your odds can be the best play. However, you should sometimes consider folding even if you get a good price to call: your 9-high flush draw in a 5-way pot can easily be drawing dead after three players have already put money in the pot. This is what we call reverse implied odds. Moreover, you are not going to get a lot of value from your opponents if you hit your draw because everybody will be scared. 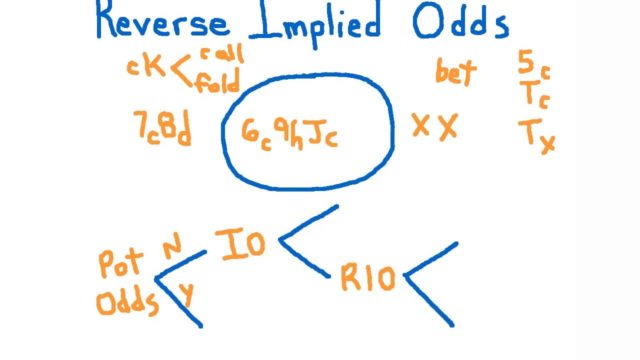 Used for illustrative purposes only

It is very important to understand that your draw can be dominated by an opponent’s holdings. If you have 7h8h on a Th9h2d board, you can’t feel completely comfortable getting it all in, as the villain may have better flush draws and be crushing you. It is best to aggressively play draws that can dominate your opponent’s range, which happens often especially in late position.

The lesson here: Be very careful when drawing to a non-nut hand in a multi-way pot, even if you have proper odds: it is possible someone could have you dominated.

There is a big difference when considering how to play draws in 3-bet pots, single raised pots, and deep stack pots. When you have a flush draw against an aggressive opponent in a 3-bet pot, you should raise and try to go all-in most of the time. This is much harder to do when playing deep stacked, and these semi-bluffs are not the kinds of hands you want to go broke with in this spot. Therefore, when playing deep, try to be much more careful with unmade hands.

When you ate too much over the holidays… #DoubleBellyBuster 🍗🍰 pic.twitter.com/ddHpU4tqQE

5. The number of players in the pot

Usually in multi-way pots you should play your draws in a more passive way, as you are not going to achieve much fold equity against many players. Moreover, as I warned before, be careful when drawing to a non-nut holding.

There are times, however, you want to mix it up and play draws aggressively even in a multi-way pot. For example, at a full ring table you are first to act and check from the big blind. The original raiser, a weak-tight player, c-bets into a 4d5d8s flop from UTG. The UTG+1 player calls. You have Ad9d, the nut flush draw.

In this situation you can consider raising. You are ahead of all other potential flush draws and the board hits your range well – you can theoretically have all the sets, 67 suited, 45 suited and 85 suited. On top of that, this board suits your opponents’ range – they’re unlikely to play hands like that (except 88) from early position.

What it’s like when you get over-aggressive with an ace-queen in a multi-way pot. pic.twitter.com/wXCCQNocdw

The earlier someone’s position at the poker table, the tighter their range is likely to be, and thus the more passive they are likely play.

7. Your perceived range / Board structure

Your mind should always be tracking what your perceived range is; i.e., what you’re representing on different board structures. For example, you are not going to donk bet your nut flush draw on a AdKd2h flop in a big blind vs. button scenario. It is much better to make this move on a connected board that hits your range, such as 567.

Deciding what your next move ought to be, whether it’s checking, donk betting, check raising, often depends on what the flop will bring as well as how your opponents perceive your range from your position at the table. Beyond thinking about their hand ranges, you also need to be aware of what range they’re likely to be putting you on.

When you flop a 9 high flushdraw versus the fish but he 5x pot jams the flop pic.twitter.com/90pj7FtEet

If you are in position, you have a large amount of options at your disposal: you can bet to apply pressure, you can check back to realize your equity. You are in control. Sometimes you can get lucky: raise with a high card and a draw, get called by a draw, check back the river and win.

Playing out of position has many disadvantages: you have less information, you can’t take a free card, you may let your opponent check back and control the pot.

However there are two interesting plays I encourage you to use while playing out of position:

Most poker players are used to playing against a c-bet, but they have issues facing a check-raise from a pre-flop raiser. Start with very good draws on wet boards, then try mixing it up with weaker hands, even with good backdoor draws.

Balance your range: lead the turn with both your completed and missed draws. For example, when you have a backdoor flush draw and the third card of the same suit comes on the turn, you can lead to represent a flush.

9. Your opponent’s statistics and the dynamics between you

There is a lot to be said in this point.

Firstly, if you’re playing online, be sure to use your HUD wisely and look at your opponent’s VPIP, PFR, WTS and AF to determine whether he is a calling station, maniac, weak-tight or professional player. If you’re playing live, reference the poker notes you’ve taken against your opponents and draw as best as you can from your recollection of experiences playing with them.

Once again, remember about bluff-to-value ratios: I don’t advise you to play every draw aggressively against regs. For example, if you make a pot-sized bet, in perfect scenario you should have 33% bluffs and 66% value hands, as you give your opponent 2:1 odds to call.

Be aware of dynamics and your table image. Change gears: after couple of pots you have played in an aggressive manner, start to play passive and vice versa.

These are the characters I’m playing against tonight. We have…
A calling station.
A little old lady.
A random player.
The aggressive player.#poker pic.twitter.com/IJim41JZQY

The bigger your fold equity, the more aggressive you can play. I might be listing it as #10, but it’s rule number one.

Your fold equity is based mostly on: your opponent’s statistics, your perceived range, your image, the stack sizes, and the amount of players in the pot. There is also factor I haven’t mentioned yet: the sizing of your opponent’s bet.

You open from the cutoff with AsQs. The button 3-bets and you decide just to call because your opponent has a high probability of folding to a 4-bet and you want to dominate his range.

The flop comes 598 with two spades and your opponent c-bets almost pot size. What should you do?

In my opinion, this is not a good spot to raise. Unless your opponent has worse flush draw than yours, you are probably not in a great shape against his hand. Specifically, betting pot on such a wet board is a huge demonstration of strength. Therefore, you can’t expect him to fold often in this situation, so just call his bet and hope to improve on later streets.

Taking Hambone to the WSOP as a support dog to keep me calm. Plus, he’s pretty good at calculating reverse implied odds and fold equity. pic.twitter.com/M8VZL0zI99

This has been a somewhat advanced strategy article, and I’d recommend reading it through carefully at least a couple of times so as to get the maximum value from the tips presented.

To conclude, remember that good draws are among the best bluffs in your range and should be played aggressively most of the time so as to balance your range. Remember to consider your opponents, your odds, bet sizes, and your position when making a decision.

If I had to choose the most important factor from among the 10 listed, I would choose ranges: understanding what you represent and what your opponent’s range is, is what poker is all about.

Good luck at the tables!

Grzegorz Bochniak is a passionate poker player from Kraków, Poland. He first got into the game in 2011 and absolutely fell in love with it. In particular, both the mathematical and psychological aspects of it were interesting for him. Aside from poker, Grzegorz’s interests include sports, psychology, and travelling. After completing his B.S. degree in […]