The First Time I Played Poker in a Las Vegas Casino

Every so often I think back to the first time I anted up at the felt, for real, in a Las Vegas casino. Growing up in Los Angeles, my parents used to take the family to Vegas about 5–6 times a year. They had promised me that they’d take me to gamble along with them for my 21st birthday. Though that didn’t end up panning out, I was able to make my first visit to Vegas as a legal adult back in 2004, when I was 23 years old. In the immediate wake of the prior year’s Moneymaker poker boom, I was determined to “follow in his footsteps” as it were, and play poker at Binion’s Horseshoe, the then-home of the World Series of Poker. 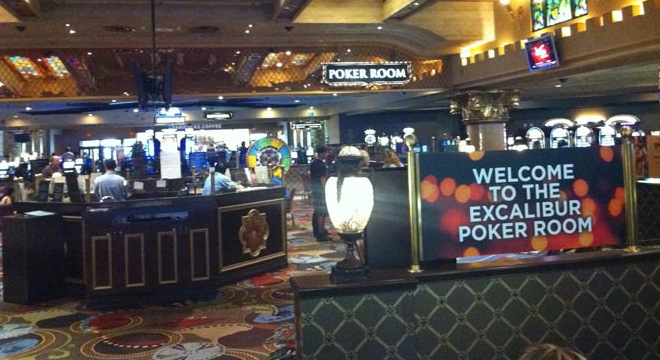 But before heading off to the “big stage”, I felt the need to “test out the waters”, so I headed over to the Excalibur poker room, of all random places. This was back when Excalibur had a poker room, and it was stocked full of real tables, not the electronic PokerTek tables. Like I said, this was WAY back when in the wake of the burgeoning poker boom every Las Vegas casino wanted a slice of the action.

Sometimes, Even the Best Laid Plans…

Upon entering the room I noticed that a free poker lesson was about to begin, after which a real cash game would commence among the participants. With a grand total of about 1.5 years of sporadic home game experience under my belt at the time, I figured that I could bide my time sitting through the lesson for half an hour and pretend not to understand the game at all, ask stupid questions, etc. Then, when the cash game would start, I planned on “flipping the switch” and taking everyone’s money. I remember feeling absolutely 100% confident that my scheme would work.

As an aside, I remember feeling exactly the same way, 100% confident that I’d win the first time I pulled a slot machine lever, because I’d read a couple books on how to “beat the casino”. Naturally, I was completely wrong about the slots, losing my $20 roll of quarters at Wheel of Fortune (this was before Ticket In/Ticket our technology really took hold). 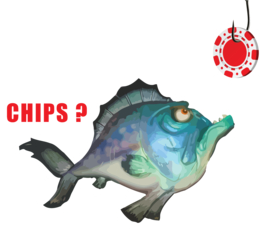 Anyhow, as you probably guessed, I was totally off regarding my “post-lesson plans” for the poker table as well. I got wiped clean of my initial $50 buy-in in just under an hour.

Looking back, it’s likely that half of the other people sitting through that free poker lesson had the same “brilliant idea” as I had and were far more skilled and experienced than I was. I might of course be exaggerating, but it’s possible that many of them were even locals who woke up each morning licking their chops at how they were going to suck dry the bankrolls of unsuspecting recreational players taking poker vacations like me.

Of course, nearly a decade later, I realize how silly and absurd my “plan” was. But you’ve got to remember, this was 2004, an eternity ago as far as poker is concerned. “Know-it-alls” like me saw poker on TV and thought it was easy; fish were a dime a dozen, and practically nobody sitting around the felt in those days had done any sort of serious studying of the game.

My, what anyone playing the game today, even recreationally, would give to be transported back in time to those golden years of the poker boom, but armed with a decade of poker knowledge and experience… It’s practically a shoe-in that even if you wouldn’t make it as a star, you could at the very least grind out a pretty darn nice bankroll in a relatively short amount of time.

All these years later, it’s fun to laugh at myself when reminiscing about my first live poker session in Vegas. At least I sustained just a $50 loss. Plus I got a really quick, painful lesson in humility that I’ll never forget.

Oh, and as for my poker session at the Horseshoe, that’s a story that’ll have to wait for another time…

Did you experience something similar in your first foray into a Las Vegas poker room? Share your memories with us in the comments section below or on our Facebook page.