Ever since poker has become mainstream, which has been the case for some years now, we’ve had numerous discussions about how to bring more ladies to the felt and get more women interested in playing. Traditionally speaking, poker has started off as a “men’s game” and, as we all know too well, traditions are often hard to break away from.

There are many reasons why the number of women in poker is quite small compared to male players and we won’t go into all of these reasons in this article. However, one thing that is certainly out there is that there aren’t as many ladies who choose to pursue poker professionally, meaning many of them don’t actually have the bankroll to get involved with major tournaments or don’t feel comfortable putting a significant amount of money on the line for what’s usually a single shot at a glory.

Realizing this issue, Poker League of Nations has come up with a rather inspired solution for all the ladies out there who would like to have a go at a major tournament, such as the WSOP Main Event, but have reservations with regards to spending too much money. The solution is called staking satellites and it is quite interesting but it might need further explanations, which is the main reason for this article.

The goal of PLON is to expand women’s participation in open events. Our worldwide staking satellites provide opportunities for women to play in higher buy-in open tournaments as well as cultivating community forging – the investors have a vested interest in the winner’s success. pic.twitter.com/HKvCzb8KdT

That’s along with the possibility of participating in this year’s WSOP Main Event for free – which is explained in the end – so make sure to read all the way to the bottom!

Staking Satellites in a Nutshell

A great number of poker players and fans alike are familiar with the general concept of staking. It means fronting someone’s buy-in for a particular tournament in exchange for the percentage of their win (usually around 50%). Staking is quite common in the high stakes community for example, where players, their tremendous skill notwithstanding, look to lower variance by accepting a part of or a full buy-in in exchange for a share of their potential winnings.

The winner or winners playing in the target tournament, e.g. WSOP Main Event, get to keep a percentage of winnings, while the rest of the winnings are distributed among everyone else who participated in the satellite. So, if a player were to qualify for the WSOP Main Event and end up winning $10 million, they’d get  to keep $5 million (or whatever percentage was agreed), while the rest of the winnings would be distributed to everyone who participated in the original qualifier.

Two Sides of the Coin

A serious poker player might read this and wonder if staking satellites make any sense. They pretty much work like regular satellites, but if you win a seat and then cash in the target tournament, you’ll have to give up a percentage of your winnings.

As mentioned, staking satellites were devised as an idea to get more women involved in poker via ladies-only tournaments. By using this model, these events are guaranteed to generate much more interest as even those who don’t qualify directly get to sweat those who do as they know a strong finish in the target tournament will also mean a nice payday for them.

Furthermore, a big win in a target event could mean that a number of ladies interested in poker could end up with a sudden infusion to their bankrolls. This could certainly be an incentive for them to get more involved in upcoming events on their own money or participate in more staking satellites in the future, helping grow the idea and, consequently, bringing more ladies to poker rooms across the globe. 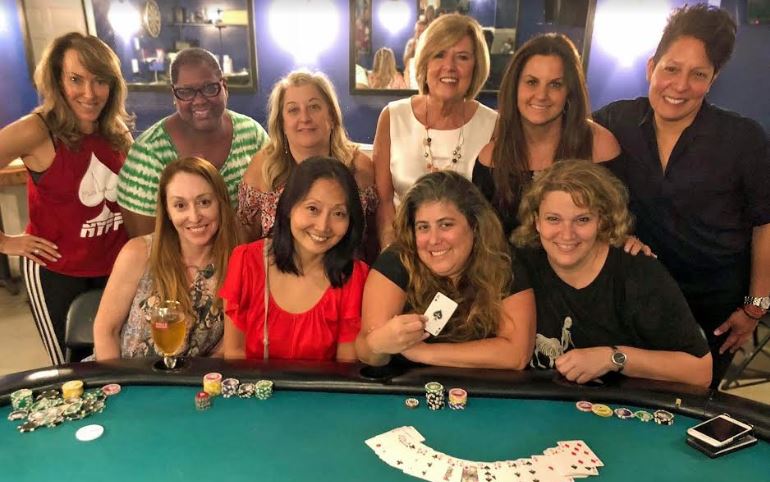 The idea of staking satellites was envisioned by Poker League of Nations, currently the only organization organizing these types of events. A dedicated PLON survey revealed that bankroll and distance were main limiting factors for most women who had desire to become more involved with the game.

Staking satellites addressed both of these issues. Apart from the financial side, the organization works with a number of casino venues and poker rooms, so they can host local events for interested players. By doing this, women are no longer required to travel long distances to take their shot as they can find a staking satellite at a nearby venue.

To make things even better, PLON never takes any fees for making these events possible as the organization consists of a group of volunteers and true poker enthusiasts participating solely out of love for the game. 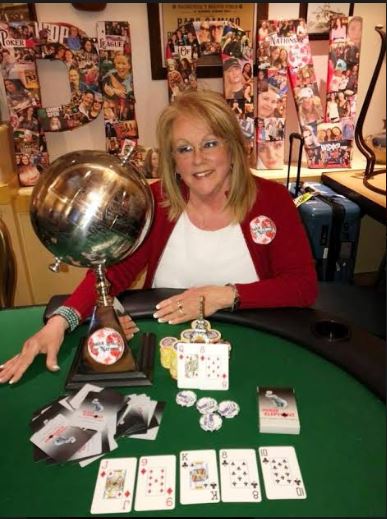 Positive Experiences Across the Board

The overall response from the poker community to the idea of staking satellites has been great, especially in the light of the fact that PLON takes no rake for their involvement in the process. One of the many comments on PLON Facebook group is a good example of this positive attitude:

“I was reading about these a few weeks ago and the negative comments that were made. I’ve personally never played in one but I think it’s an awesome idea and I understand that they aren’t for everyone. But I think it would be very cool to win a bunch of money for the group of Ladies that you competed against or to rail the Lady that won. It seems like a win/win, even if you lose…”

While participating in a staking satellite does mean, by default, that you will agree to giving up a share of your potential winnings in the target tournament, it isn’t necessarily a bad thing. For women who truly enjoy poker, these can be excellent opportunities to not just build their bankrolls but also meet like-minded ladies and perhaps organize their own staking satellites moving forward if they like the idea.

True to the form and illustrating just how much they are inspired to bring more women to the felt, PLON has set up a freeroll staking satellite for this year’s WSOP Main Event. The $10,000 seat will be up for grabs for one lucky lady. Rules for who is eligible to participate and/or win a seat into the special satellite can be found in the image below. 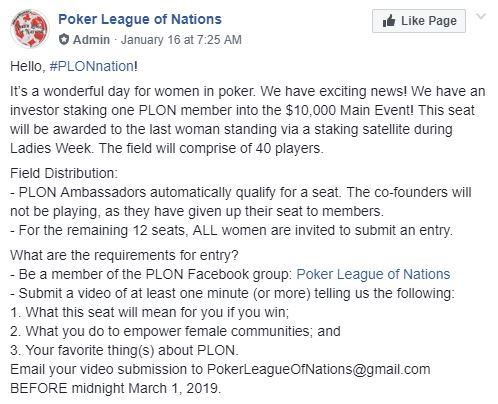 If you like the idea and would like to get involved, be sure to join the PLON Facebook group and find out more information. Apart from the freeroll, there are more staking satellites planned in the near future, both for the WSOP Main Event as well as additional WSOP side event tournaments alike, so it is definitely worth checking out.