“Good morning, Robbie. I am sending you this invitation to be part of our jury for the 4th Annual American Poker Awards…”

And with those words from the GPI’s Eric Danis, it became “official.” I had been summoned to join a select group of poker players and industry colleagues to help determine which nominees would be deemed most deserving of this year’s high honors. I was asked to report the following morning to the Andaz Hotel in West Hollywood, where later that evening we’d all be glammed up in anticipation of one of poker’s most special nights of the year.

The process, I was told, would take approximately three hours. We’d be gathering to deliberate the merits of each of the nominees in the dozen-plus categories and ultimately give the nod to those who would later be standing up on stage to receive their trophies. I had never served on a jury before and, especially as I’d only be attending the APAs for the first time, I considered the invitation to join to be a distinct privilege.

Super stoked to attend the #AmericanPokerAwards tonight. Will be great to finally be there in person! ?

Certainly worth noting, was the GPI’s commitment to preserving the awards’ integrity before, during, and after jury duty. While we weren’t sequestered or sworn to secrecy with NDAs, we were charged with the responsibility of keeping the entire process fully confidential, not disclosing that we had been selected nor details of the discussions that took place during our deliberations. As a matter of fact, we wouldn’t even know who the other members of the jury would be until we convened.

I arrived promptly at 10am and was greeted by Eric as well as Ryan Feldman and Adam Levy. I must admit that I was impressed. Given professional poker players’ penchant for “late regging” most things in life, it was quite refreshing to see that those two fine gentleman took their responsibility seriously and showed up on time.

One by one, the rest of the jury filed in: Ari Engel, Donnie Peters, Maria Ho, David Tuchman, and – straight from the airport no less! – Kevin Mathers, a.k.a. KevMath. Surrounded by a group of people I’d consider to be true “poker dignitaries,” I once again must say that I considered my invitation to join them to be a genuine honor.

While he wasn’t physically present as in years past, GPI CEO Alex Dreyfus did join us at the outset via Skype from Malta. As obvious to anyone who follows Alex on social media, his focus is directed towards eSports and Blockchain ventures at the moment, plus his wife is pregnant, so his absence was understandable. Still, it was nice to see that he hadn’t forsaken poker altogether. It was also clear that Alex had entrusted his full faith in Eric and that Mr. Danis was quite capable and welcoming of assuming the reigns and chairing the meeting.

Just prior to our arrival, Eric had sent us all a document detailing the list of nominees for each award as well as some brief notes and tidbits about each nominee. I, for one, felt that the outline was quite helpful. While I follow the goings-on in poker quite closely, I can’t claim to be fully 100% knowledgeable about every pro player, tour, performance, industry person, or bit of content that gets released throughout the year. I imagine that the brief was similarly useful to my jury colleagues.

We moved forward at a steady pace, giving all the awards and nominees their due. Eric started us off each time, and then the floor was opened for discussion. After each discussion, we jotted down our picks on scraps of paper, folded them up, and passed them along to Eric, who tallied the votes and recorded the winners, without announcing any names to us.

While I imagine that each of us had had at least a faint idea of the nominees we’d want to vote for prior to that morning, it didn’t seem to me as though anyone had arrived for poker’s jury duty with any sort of agenda. Our preferences notwithstanding, we were all prepared to hear each other out in making the case for votes.

I can only speak for myself on the following point, but I can certainly admit to having had my opinion swayed and changing my intended vote when some of the other participants made valid, well-stated cases in favor of (or against) one nominee or another. We were all encouraged to give our two cents and no one person ever attempted to filibuster the proceedings. The discussion amongst us was respectful throughout, and frankly quite enjoyable. It’s quite rare for me personally to actively participate in any sort of forum discussing poker, so it felt pretty awesome to be “in my element” and amongst like-minded people with the same passion for the game as I have.

With some discussions, it was crystal clear who’d be carrying the votes and be hoisting the trophy that evening (there were at least two unanimous ones, for Lifetime Achievement – to Lon McEachern and Norman Chad – and Jury Prize – to Eric Danis), while on the other hand at least one vote (as per Eric) was more hotly contested, with the winner carrying just a narrow 5-4 majority.

Even during what could be called the more “contentious” discussions, the mood was kept pretty lighthearted at least in part due to the presence of Silas Tuchman, David’s adorable son, who certainly commanded the room’s attention every so often while enjoying his bottle, mushed avocado, and being lulled to sleep. 🙂 In short, we all had a grand time! 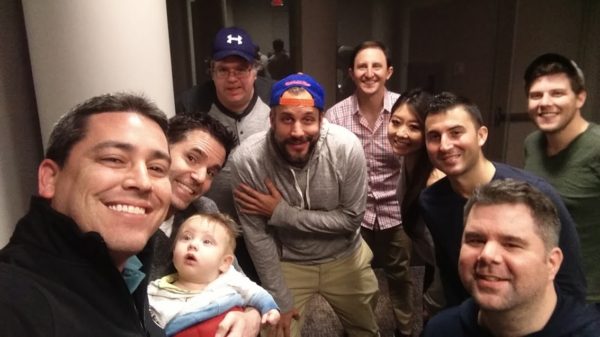 Immediately upon being informed that I’d have jury duty, I knew that the experience was one I’d want to write about. Especially as I had never seen any details given beyond the names of jurors being released post-ceremony, I felt it would be enlightening to give the poker world a peek behind the scenes, as it were.

Each year, there’s a good deal of public discussion in the poker community on Facebook and Twitter surrounding the awards. I feel that, as long as it’s all kept in good taste, such discussion is a positive thing for our industry. To touch upon a point that Alex Dreyfus shared with us via Skype that morning, the awards aren’t meant to be a competition or a popularity contest. Rather, they’re meant to be a celebration of the game of poker aiming to recognize and showcase those whose performances over the prior year were not only noteworthy, but worthy of spotlighting with distinction.

Now four years in, it’s hard to imagine the poker calendar year without the APAs. It’s the one occasion each year where spirited positivity is practically guaranteed to dominate the atmosphere. I left the jury room feeling uplifted, and I imagine similar sentiments were shared by my fellow jurors.

In an era where it’s all too easy for spats and disputes to lose all sense of proportion in the poker world, with negativity attracting way more eyeballs and attention that it deserves, let’s all perhaps try to capture the positivity that the APAs engender in us and carry it forward.