They were just some teenagers hanging out playing cards… or were they? One of these players would go on to make millions playing No-limit Hold ’em. “I didn’t really catch the bug until I started playing poker in the lunchroom of my high school when I was 15. That’s when I started seeing the money that could be made in this game.” Still a teen, Alex Fitzgerald was already thinking creatively, a trait that would become a hallmark of his poker game and a harbinger of the financial success to come. 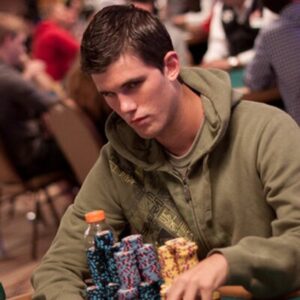 Fitzgerald worked several dead end jobs before making it big. One of them could have cost him his life. He returned to his birthplace of Alaska to work as a commercial fisherman, the nation’s deadliest job according to the Bureau of Labor Statistics. He endured treacherous weather, backbreaking work and the threat of falling overboard – the second leading cause of death among fishermen. In 2009, commercial fishermen were killed at a rate more than 50 times higher than workers in other industries. Still a teenager, Fitzgerald gambled with his life to earn the cash he’d need to become a full-time poker pro.

Now 26, the poker world knows Alex Fitzgerald as “Assassinato.” That screen name itself sounds like it belongs to a winner, doesn’t it? Fitzgerald has amassed nearly $3.5 million in lifetime winnings since he watched the movie Rounders with his father and started outwitting his high school classmates. You, like I, may have hired Alex for private coaching or attended one of his wildly popular webinars. Fitzgerald is now one of the most sought after poker coaches in the world. More than 600 students have benefited from Fitzgerald’s unparalleled approach to the game. He’s logged more than 2,000 hours of coaching and spends hours preparing for his lessons.

What’s It Like to Learn Poker from a Top Pro?

Students learn quickly that they don’t have to be flawless to become accomplished poker pros. “I used to say, ‘I’ve never won a live tournament.’ That was true up until a year ago. I am not great at math. It was my worst subject, by far, in high school.” Why is Fitzgerald so quick to draw attention to his imperfections? He wants students intimidated by poker math to understand that all they need is a basic understanding of algebra to succeed. “I get the idea many of them think I’m messing with them, but after they see some of the basic math behind really flashy plays they understand poker is just a game. Other people want you to think it’s complicated, so they can keep selling you on how smart they are. Anyone with dedication can learn how to play real bad ass No Limit Hold’em.”

Not everyone is a fan of Fitzgerald’s teaching methods though. He has haters in the professional poker community who say he’s giving away too much information. They’re so outraged, Fitzgerald says, that some have even threatened him physically. His response: to give away more of their so-called “secrets” so his students know the truth about the game. “Those who tell you it’s a flow thing or a natural instinct are sorely mistaken. Surely, you need ‘table feel,’ which can only come from experience, but many of my inexperienced students take out so many of the supposed naturals with a counteractive strategy that wasn’t even hard to compose.”

Running on all cylinders, Fitzgerald quickly transitions from private coaching, to producing critically acclaimed training videos and blogging on his website, Poker Head Rush. Fitzgerald produced a series of videos during 2014 SCOOP (PokerStars’ annual Spring Championship of Online Poker tournament series) that contained more than 70 hours of content. He reviewed sessions live, from the first hand down to the several final tables he would go on to make. Fitzgerald gave away his strategies, explained the motives behind his actions and evaluated his opponents’ play. The day after I started watching the videos, I successfully replicated one of Fitzgerald’s moves. I executed a check-raise bluff and took down a large pot. He has since released a WCOOP (PokerStars’ annual World Championship of Online Poker tournament series) series, and another entitled, “You Flat Too Much.”

An Example Worth Emulating at and Away from the Poker Tables

Alex Fitzgerald is a true example of how a person can pursue their passion and create a sustainable business model at the same time. As a coach, he has an income not dependent on his own poker play. At the tables, he is feared. Just this year, Fitzgerald made four major Sunday final tables, one a SCOOP high rollers tournament. Now, in his eighth year in the business of poker, he has valuable insight to offer. “Players on the way up need to recognize it’s not about winning the most. It’s about winning consistently. Many guys have more earnings and countless more first place finishes, but nothing to show for it. Save your money, and parlay what you’re doing in poker into other fields.”

For coaching, you can contact Alex at Assassinatocoaching@gmail.com. Many of his articles and videos are available at pokerheadrush.com as well as at Pocket Fives. You can listen to Alex’s podcast on Oneouter.com.

Davida Mintz is a poker player, freelance poker writer, and a contributor to Titan Poker who discovered the game almost by accident on a trip to Las Vegas. Little did she know that she would continue to play and study poker online every day. Accustomed to trading stocks and options, her brain quickly adapted to […]

Great article; I enjoyed the story!