How Online Players Should Approach Their First Live Poker Tournament: Expectations vs. Reality

If you’re primarily an online poker player, after spending so many hours in front of a computer you’d probably feel excited about having the opportunity to finally head out and play your first live tournament. You probably have numerous expectations, including preconceptions about how enjoyable it will be to move from a quiet room clicking buttons to a charming casino poker room environment shuffling chips. Still, it’s better to be surprised than disappointed. Here, then, are some of the most common expectations and mistakes that online poker players tend to have when gearing up for their first live poker games. 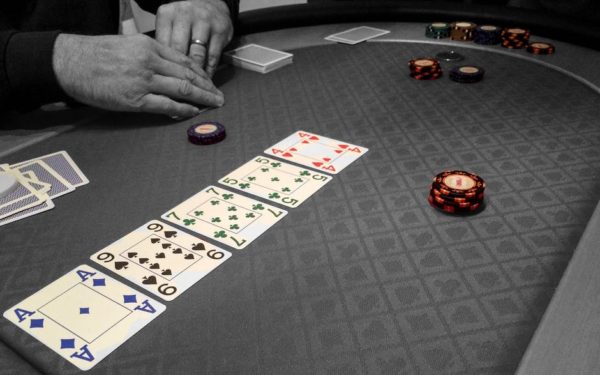 Usually, when you go to a casino for the first time, you probably won’t focus that much on making money. Rather, you’ll want to check the place out, have a nice time, and create pleasant memories while playing some poker. Often, however, online poker players will sit at a live poker table for the first time only to discover that live play can be incredibly boring, especially when compared to the speedy pace of play online.

At live poker tables, cards are dealt far more slowly, and action takes a lot longer than in online games. Plus, of course, you cannot multi-table in a live setting. You’ll find yourself waiting endlessly for premium hands only to have them cracked by drunken players with garbage holdings.

Nobody likes a bad beat story, so I’ll just say that poker can be exceptionally cruel. $50 for cracked aces is no consolation for losing a 3-way all in preflop when the guy with J8 suited says “I had a feeling” and is now stacking $800 that could have been mine.

If you’re in a tournament, you might bust out quickly and have to go back home; you can’t just load up a new tournament instantly, like you do online. You promise yourself that it was your first and last live tournament.

Some people love playing live poker, while others hate it. If you’re prepping for your first live poker session though, don’t go in with great expectations, as you might end up hugely disappointed.

2. It will be easier than online

You’ve likely heard countless times that beating online poker games is way tougher than live events. There’s a lot of truth in that statement, so you may think that as an experienced online player you would have a significant edge over your opponents. For instance, NeverfoldQ5 is ranked as the 334th-best online poker player in the world, which logically would also make him quite the threat at live poker tables, too.

Even so, don’t forget that it will take you some time to adjust. You may, for instance, fold top pair top kicker on a wet flop against a villain’s all-in in at an early stage of a tournament because you think it’s not good enough to risk your tournament life. The villain could end up showing you top pair with a medium kicker and ask you about what you were deliberating about for so long. Live players usually implement very different strategies than online players. Stay humble and understand that it will take you some time to get to know their tendencies.

3. Reading body language will be crucial

It’s natural for an online poker player to think that having a great poker face and being able to get good reads on opponents using physical tells will be a critical factor in live games. Perhaps you’ve even studied up with books and videos about live tells. Then, after sitting at a table for the first time and spending hours looking at your opponents trying to scan them for tells, you’ll realize that body language doesn’t influence your decisions anywhere near how much you thought it would.

Gaining information from your opponents’ body language is, of course, very important, but if you’re new to live poker you’ll you probably approach it incorrectly. Book study is worthwhile, but people don”t always behave exactly “by the book.” The obvious signs are quite rare to spot in live games, even among relative amateurs. Physical tells are usually rather subtle, and as such it’s far better to learn them slowly. Pick one tell to focus on at first. Then, after you’ve got some live poker experience under your belt, start focusing on another tell, and so on.

Also, it’s important to be aware of reverse (i.e., fake) tells and those which could signal both weakness and strength. For example, if your opponent’s neck is pulsing it doesn’t necessarily indicate a bluff. Perhaps he might just be afraid that his strong hand has gotten coolered in a huge pot.

This one, quite simply, cannot happen when playing online poker. In live poker, however, it’s actually possible to “accidentally” throw away your winning hand.

For example, let’s say that you turn bottom pair into a bluff. Your opponent calls and, as the aggressor, you must show your cards first. You are convinced that you are beaten and decide to muck your cards because you don’t want to reveal unnecessary information. It turns out that you actually would have won the pot, though, as your opponent ends up tabling ace-high. Mistakes like these even happen to world-class players…

Shuffle up and deal!

I’ve provided just four examples of possible misconceptions and errors that online poker players make when transitioning to the live poker realm, but of course there are numerous others. I recommend that you take the above advice to heart, and always keep in mind that while the game being played might be the same, there are significant differences between live and online poker play. In closing, remember to respect your opponents, don’t overestimate the importance of body language, check on your own whether it will be really fun, and avoid simple technical mistakes. Most importantly, however, remember to have fun; after all, at the end of the day you’re playing a game.

Grzegorz Bochniak is a passionate poker player from Kraków, Poland. He first got into the game in 2011 and absolutely fell in love with it. In particular, both the mathematical and psychological aspects of it were interesting for him. Aside from poker, Grzegorz’s interests include sports, psychology, and travelling. After completing his B.S. degree in […]