Driving Along the Poker Highway

Wouldn’t you know it that in this great wide expanse of Earth two of the most important poker hubs in the world can be found less than 300 miles away from one another? Of course I’m talking about Los Angeles, California and Las Vegas, Nevada. 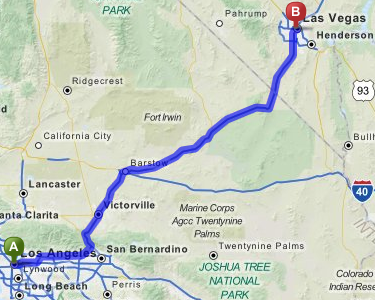 Gambling is legal throughout the state of Nevada, where the highest concentration of poker rooms in the world can be found in Las Vegas, on the Strip and Downtown. Los Angeles, for its part, is a metropolitan area home to upwards of 8 million people, as well as about half a dozen well-established poker rooms that have been in business for decades, including the world’s largest – Commerce Casino, which boasts almost 250 tables!

Despite having some excellent poker rooms right at their doorstep, however, each year millions of Southern Californians make the drive eastbound on Interstate Highways 10 and 15 to Las Vegas for a poker vacation.

Having lived in Los Angeles for the first 16 years of my life, I have tons of happy memories of my family piling into the minivan and heading off on the 4–5 hour drive to the Entertainment Capital of the World. Once in a while, I would get out of school on Friday afternoon and my parents would pull up in the car together, with my brothers in tow, and say “surprise, Robbie, we’re going to Las Vegas for the weekend”! Back in the late 80s and early 90s, Las Vegas was a very different place, a family vacation destination, and like good patrons we made the road trip over about 5 or 6 times a year.

Frequent visitors that we were, my parents often received free room stay offers in the mail and most of our meals and even sometimes show tickets were all on the house. While my siblings and I pumped quarters into arcade games for hours on end, my mom hit the slots and my dad took a seat at the felt in the Mirage and Treasure Island poker rooms, playing 7-Card Stud. More often than not, Mom added to her collection of Polaroid snapshots of winning $8,000 slots jackpots and Dad would almost always take me aside and open his wallet, showing me a bunch of hundreds that he won at the poker table.

Well, Las Vegas isn’t as close to my current hometown as it used to be, but today, it’s time to turn back the clock to the “good old days”. Today, for the first time in 14 years, I’m setting out on the poker highway, from LA to Vegas. I’ll be passing those same landmarks like ZZYZX Road and the World’s Tallest Thermometer in Baker, California. Driving past Barstow and its 100+ outlet shops, honking the horn as I pass over the state line into casino country. Then, finally, when I pass that final turn, seeing Las Vegas gleaming about 20 miles away in the distant horizon – there’s nothing in the entire world like that feeling.

And just like my parents before me, I hope to come back from this Vegas trip a winner, with not only stories to tell you all here on the Cardplayer Lifestyle poker blog, but also with a wallet full of hundred dollar bills or even a (digital) picture of having won a huge jackpot.