Dems Da Breaks… at the WSOP

Joe Cada stepped outside into the 107-degree Las Vegas heat for a quick reprieve from the intensity of the Amazon Room.

The 2009 WSOP Main Event champion was deep into another historic run at the 2018 Main Event, and when a 20-minute break came after Level 26, Cada unassumingly exited the Amazon Room and slipped outside through another set of doors at the Rio Convention Center.

Cada was the biggest name remaining in the field of about 70 players at that point, but no one noticed as he exited past the All American Dave food stand, went around a corner and disappeared with a couple of buddies for a few precious minutes away from the lights of the feature table. 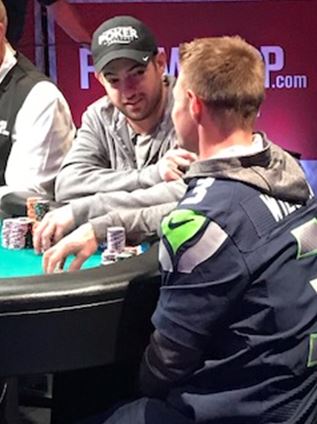 Had he chosen to exit into the bustling main corridor of the Convention Center, Cada very well might have run into a slew of well-wishers and media. By utilizing the lesser-traveled pathway outdoors, however, Cada got a few minutes of much needed quiet time en route to his eventual fifth-place finish.

It is essential for players to use the break time wisely at the WSOP, with most events requiring 10+ hours of play per day. The standard event structure includes 15-20 minute breaks every two hours, and a one-hour dinner break in the middle of the day.

First-time players at the WSOP might be overwhelmed by the madness of the breaks, which involves a mass exodus of players into the halls of the convention center, and long lines at the restrooms and the Poker Kitchen.

For poker veterans like Daniel Negreanu, having a plan for the break times is key. I caught up with the six-time WSOP bracelet winner on a break during the $3k Pot-Limit Omaha Six-Handed event, but only after Negreanu recorded a vlog entry for his YouTube channel, hurried out of the Amazon Room through a restricted area, and came back to his table with about five minutes left on the break. (Starting at around the 4:05-minute mark in the clip below, I can be seen in the background over Daniel’s left shoulder as he walks out into the corridor, then I take a seat on a bench, awaiting his return from break.)

“I go to my trailer and get away from people,” Negreanu said. “And eat. I’m a vegan, so I have a chef prepare food for me in my trailer.”

With nearly $40 million in live tournament winnings in his career, Negreanu has the luxury of a personal chef and a private trailer, but first-timers at the WSOP need to have their own plan for food, bathroom breaks, and time to unwind away from the tables.

Negreanu said he’s never been late coming back to his seat off of a break, and advises that newcomers plan their break strategy ahead of time.

Have a purpose for the breaks; so whatever that is for you, focus on doing that.

“For me it’s just different than other people. I need space from people. I don’t like to be bothered on the breaks. I don’t mind while I’m playing, but when I’m on break it’s my break. And I want to go pee and be left alone.” 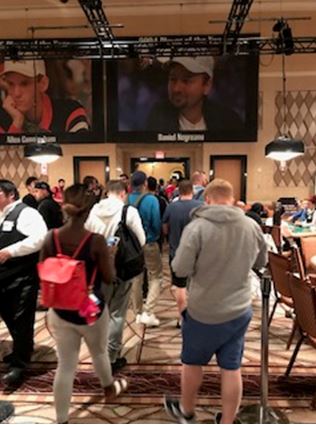 Players exit the Brasilia Room during a break at the WSOP

I watched Antonio Esfandiari bolt from his table and run through the halls of the Rio to wherever he was going on his dinner break on Day 5 of the Main Event, which is certainly one way to beat the crowds.

Others, like Dan Shak, take a more relaxed approach to the break. The 59-year-old high-roller wasn’t in a hurry on a 20-minute break from the $5k Turbo NLHE event, taking some time to check his text messages and giving me the opportunity to pick his brain about his break-time habits.

“The biggest priority at my age is bathroom,” Shak said with a laugh. “Basically the closest bathroom, or else I don’t like the crowds, so sometimes I’ll go a little further. But I’m not a bathroom snob, I’ll use the back bathrooms.” 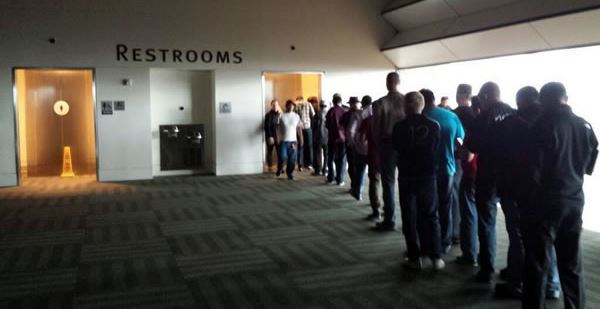 Like Negreanu and Esfandiari, Shak is a veteran of the WSOP and knows the layout of the massive convention center well. He did admit, however, that he’s come back late from a break a few times.

“Dinner break I’ve timed it wrong,” Shak said. “A regular break I’m usually good. And I really don’t like rushing back, so I try to get back a couple of minutes before, because I don’t like the stress of missing hands and things like that. “

Shak recommends knowing your food and bathroom game plan ahead of time to maximize the break opportunities, but also advises using the time to take a mental break from the game as well.

The biggest priority at my age is the bathroom.

“If you played a hand badly, or taken a bad beat, or had a severe hit to your chip stack, and you’re heading in the wrong direction, it’s a good time to reboot and try to get a fresh start after the break,” Shak said.

Spectators at the WSOP should plan their break strategy as well, as trying to get into the restroom or get food at any of the nearby options is an almost impossible task if a large-entry tournament has just gone to break. Come to think of it, you’d probably have better luck playing one of the property’s thousands of slot games.

As a fan of the game, the breaks are better used as an opportunity to take in the bad beat stories that swirl around as hundreds of players spill out of the playing areas and into the halls. It’s also a good time to try to get that selfie with your favorite player that you’ve been trying to take, although fast movers like Esfandiari are pretty tough to catch.

Another great place for bad beat stories and possible celebrity poker player sighting are the front steps of the convention center, where you might catch your favorite player taking a smoke break, or sometimes (unfortunately) taking a permanent break and heading out to the parking lot after busting out of an event.

The breaks are a fun and fascinating experience to take in as a fan during the WSOP, and when you see a big-name player just remember that the better they’re faring at the tables, the more approachable they’ll be on the break! 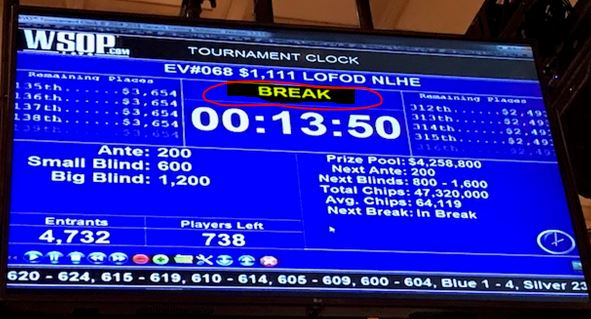